After a decade-long delay and massive overspending, Sen. Mark DeSaulnier has promised a probe into Caltrans' Bay Bridge project. 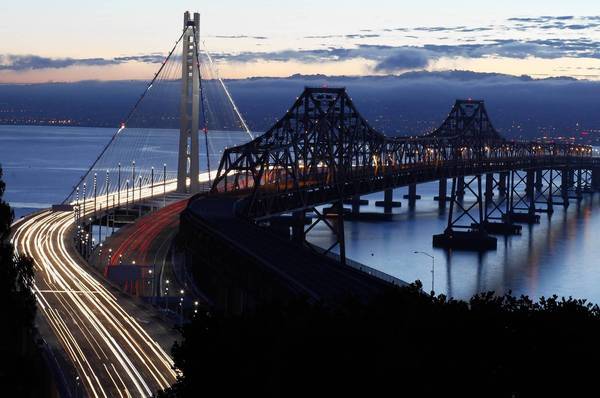 After nearly 12 years of construction and an estimated price tag of $6.4 billion, the new eastern span of the San Francisco-Oakland Bay Bridge finally opened to traffic in September.

The new eastern span of the San Francisco-Oakland Bay Bridge is open to traffic, and motorists, bicyclists and pedestrians have expressed approval of the single-tower suspension span's elegant beauty.

But then there are these facts: The project was completed a decade later than promised and came in $5 billion over budget. It was also plagued by construction difficulties, including a batch of massive bolts that snapped, delaying the opening and requiring a costly retrofit.

Last week, state Sen. Mark DeSaulnier (D-Concord) announced that he would lead a "comprehensive investigation" into the decision-making by California Department of Transportation officials throughout the nearly 12-year construction period.

He will also chair a series of Senate Transportation and Housing Committee hearings to explore problems plaguing all state "megaprojects" and come up with suggested improvements for Caltrans.
"The need for a new eastern span has been evident since the Loma Prieta earthquake in 1989, and our committee will investigate the key decisions that shaped this project over the past 24 years," DeSaulnier said in a statement.

He added that drafting legislation "that creates greater accountability at Caltrans, and improves the management of future projects, will be a top priority of mine during the 2014 legislative session."
Senate President Pro Tem Darrell Steinberg concurred.

"The problems encountered with this project raise a lot of questions, and California taxpayers and commuters deserve answers," he said. "I'm confident Caltrans will cooperate fully with this inquiry."
The probes come as part of a larger push to reform the transportation agency. Gov. Jerry Brown this year signed a bill authored by DeSaulnier that sets standards for assembling peer review panels used in public works projects.

The price tag on the eastern span of the bridge, which opened to traffic after Labor Day weekend, has reached $6.4 billion, and Caltrans' decision-making has come under increasing scrutiny throughout the year.

Most notably, criticism emerged over the use of galvanized steel bolts to connect the bridge deck to so-called shear keys, which are designed to control movement during an earthquake. U.S. industry standards and Caltrans' own guidelines warn against galvanizing the grade of steel used because of its hardness and tendency to break under extreme tension.

The bolts failed earlier this year because of hydrogen embrittlement, in which hydrogen atoms weaken steel's crystalline structure. That may have occurred during galvanization or when the bolts sat for years untightened in casings that filled with water.
Newer Post Older Post Home