Cook with a gas stove? You could be breathing polluted air, study says 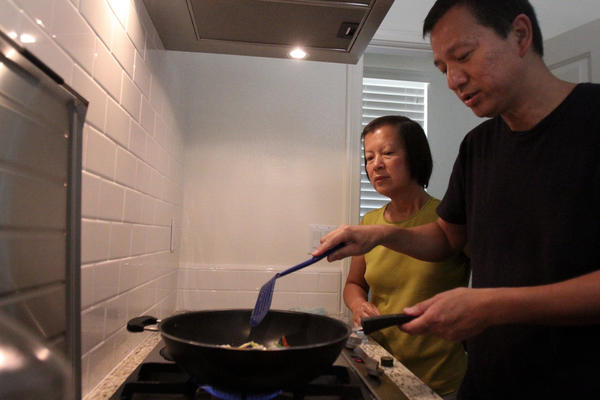 About two-thirds of Southern California households that use natural gas burners without good ventilation are exposed to excessive levels of air pollution, a new study found.

A big polluter could be blazing inside your kitchen, its blue flames glowing under your tea kettle or frying pan.

A new study says cooking with a gas stove can expose you to unhealthy levels of air pollution.

About two-thirds of Southern California households that use natural gas burners without proper ventilation breathe levels of air pollution so high that they would exceed federal health standards outdoors, scientists with the U.S. Department of Energy’s Lawrence Berkeley National Laboratory found.

After testing gas ranges to determine their pollution output, researchers used data on more than 6,000 Southern California households and their cooking habits to estimate people's exposure to air pollutants in the kitchen during a typical week in the winter.

They discovered that 62% of households using gas burners without venting range hoods are routinely exposed to excessive levels of nitrogen dioxide, 9% to carbon monoxide and 52% to formaldehyde, gases that can cause respiratory problems and worsen asthma and cardiovascular disease.

“Even in Los Angeles, those pollutants don’t exceed air quality standards outdoors,” said Brett Singer, a staff scientist who studies indoor air quality at Berkeley Lab. “But inside homes they do.”
The findings have wide implications because half of California homes have gas burners and most of them do not use range hoods that capture fumes and vent them to the outside. About one-third of households nationwide use gas burners for cooking, according to the study published in the journal Environmental Health Perspectives.

In all, the scientists estimate that as many as 12 million Californians are exposed to levels of nitrogen dioxide above health standards as a result of cooking with gas burners. Nationally, there could be tens of millions more.
The concern over
stovetops may seem surprising because air pollution has typically been viewed as an outdoor problem -- something spewed out by smokestacks and exhaust pipes, said Jennifer Logue, a research scientist at Lawrence Berkeley National Lab and lead author of the study.

But cooking on a gas burner inside your home means burning fuel in a much more confined space, where the resulting pollutants can’t easily escape or dilute, particularly if there is no ventilation to the outside, she said.

Luckily, there are simple ways to limit your exposure. First, use a range hood. Even a moderately effective one will substantially cut concentrations of pollutants in your home, researchers said. Cooking on the back burners can help too, because they sit directly under the ventilation system.

“This is not meant to scare people away from cooking,” Logue said. “People are very used to cooking so they don't think about it. They don't use their range hood because they don't consider it a hazard. Our study really looked at that problem and how significant it is.”
Newer Post Older Post Home