Could NYC's 'wacko nutso' Janette Sadik-Khan be right for L.A.? 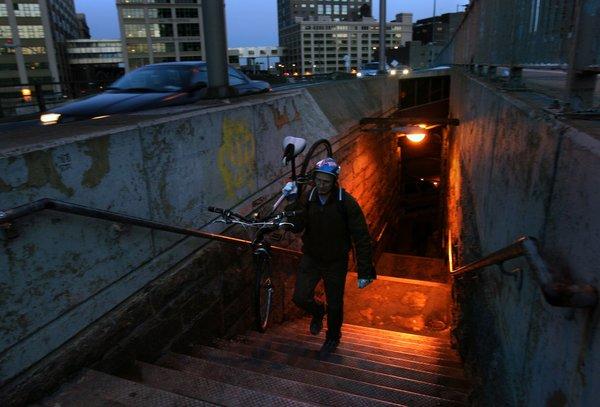 A man carries his bicycle as he approaches the Brooklyn Bridge on his commute home. New York Transportation Commissioner Janette Sadik-Khan is credited with doubling the number of cyclists in six years.


There were two applause lines in New York City Transportation Commissioner Janette Sadik-Khan’s TED talk last month: First, that in six years she "turned cycling into a real transportation option in New York"; and second, that she brought the city its first parking-protected bike lane, with parked cars and a strip of concrete separating cyclists from automobile traffic.

That was a reminder that cyclists continue to lead the conversation about urban street makeovers around the nation.

And it was a reminder as well that Sadik-Khan’s tenure may well be coming to an end as her boss, Mayor Michael R. Bloomberg, concludes his term. The election to replace Bloomberg is Tuesday.
If only there were a vacancy for her to fill in some other large U.S. city that badly needs her bold vision and drive to recover wasted street space and to enhance wider use and greater safety for cyclists and pedestrians and well as cars and buses.

Some city like, say, Los Angeles – which just happens to have an opening for the position of general manager of the Department of Transportation. L.A.’s current transportation chief, Jaime De La Vega, is leaving the post.

Would Sadik-Khan, or someone like her, be good for Los Angeles?

Many New Yorkers love her for reinventing their streets quickly and at fairly low cost, with few major construction projects. All it took was some paint, she said in her TED talk. Rolling Stone named her as one of 12 leaders who "gets things done" (the magazine said the same of Antonio Villaraigosa).

Of course, many New Yorkers hate her for the same reason. And many hate her for an aggressive and confrontational style. Critics follow the lead of New York Post gossip columnist Cindy Adams in calling her the "wacko nutso bike commissioner."

A 2011 New York Times profile of Sadik-Khan suggested that even Bloomberg, a mayor who also has been criticized for a dictatorial bent, couldn’t rein her in.

That kind of hard-driving and high-handed approach to streets is part of New York culture and history.

During much of the 20th century, Robert Moses remade and rebuilt New York according to his urban vision, which included bulldozing whole sections of town for, among other things, expressways to speed automobile traffic into and out of the city.

Much of modern New York planning has been centered around reversing some of Moses’ moves. He might have appreciated Sadik-Khan’s style, but may have been less pleased with her approach to traffic and street life.

How would that style play in Los Angeles, under Mayor Eric Garcetti and among L.A.’s planners and transportation engineers? It’s worth remembering that, not long before announcing plans to step down, De La Vega was taken to task by hundreds of his department’s workers for his management decisions, his transportation policies and, to some extent, his personal style.

New Yorker though she is, Sadik-Khan is a native Californian and an alumna of Occidental College, where Garcetti was once on the faculty. And although the widely expected winner of Tuesday’s New York election, Public Advocate Bill de Blasio, could opt to keep her, he has suggested that he is not a Sadik-Khan fan.
Newer Post Older Post Home