There's no need to rush on new taxes. Planners should take their time in weighing city and county transportation needs. 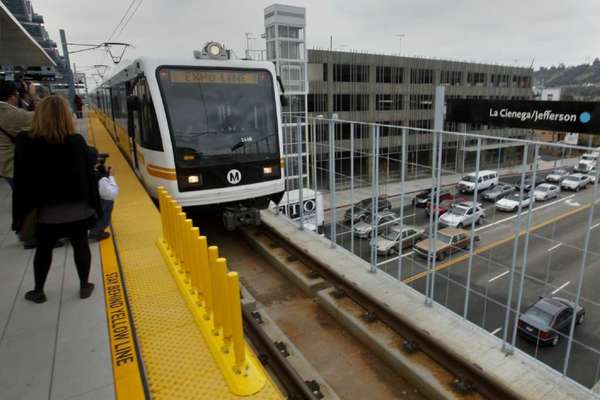 An Expo Line train pulls into the La Cienega/Jefferson station in Los Angeles. Metro's board of directors is beginning to discuss putting another sales tax measure on the ballot.

The half-cent sales tax approved by L.A. County voters in 2008 has already changed the landscape of Los Angeles.


The Orange Line busway extension to Chatsworth opened three years ahead of schedule. Construction is underway on two light-rail lines — the Expo Line to Santa Monica and the Gold Line to Azusa — and will soon begin on the Crenshaw Line. The Metropolitan Transportation Authority is also extending the Purple Line to Westwood and the Green Line to Torrance.

These projects would be in slow motion — or stalled — if Measure R had not passed. There's not much state or federal money available these days for major transportation projects. Los Angeles County has been able to kick-start projects with the local sales tax revenue Measure R provided.

That success has made some politicians ambitious. They want to raise more money to build more transportation projects in less time. But is the public on board?

Metro is discussing putting another sales tax measure on the ballot. The options before its board of directors include a 2014 or 2016 ballot measure that would either extend the existing sales tax 30 years beyond its current 2039 sunset date or create a new sales tax on top of the existing tax.
The discussions are in early stages. Here are some early thoughts.

We have serious reservations about an additional sales tax. Advocates say an increase would allow Metro to launch new projects that could be completed within 10 years. That's tempting. But county residents already pay some of the highest sales taxes in the state. Would new transportation projects be worth increasing that burden?

Last year, Metro leaders proposed Measure J, which would have extended the half-cent sales tax 30 years. Their argument was that transit managers could borrow money on the bond market to accelerate construction now and repay investors with the tax revenues that would roll in after 2039.
This page backed Measure J, but voters narrowly rejected it — in part because the Metro board itself was split. Some saw Measure J as too L.A. city-centric. In considering a new sales tax proposal, Metro leaders must consider transportation needs throughout the county, but in the end they should select the projects that deliver the greatest impact, even if they are concentrated in the city.

That's why a 2014 ballot measure should be off the table, and 2016 would be a better target. Metro leaders would need to adopt a package of projects by April in order to get something on next November's ballot. That's too little time. These are tough political decisions that involve planning for the next generation of Los Angeles County residents. There's no need to rush.