Some Metro stations are not large enough to accommodate gates. Others that can still allow riders to enter for free. 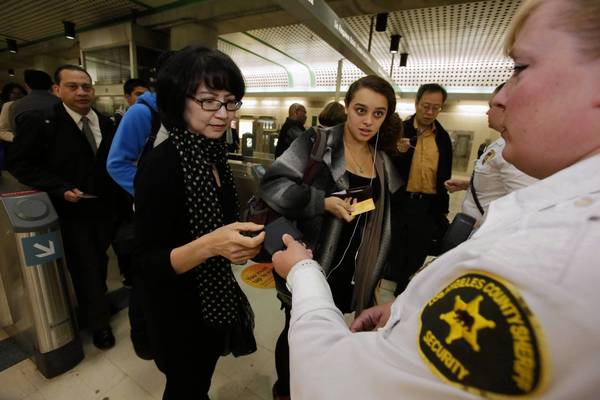 Julio Maciel was headed home on the Expo light-rail line in downtown L.A. on a recent weekday. He entered at the Pico station, sat down and waited for a train headed south.

But when he walked inside, he didn't pay.

Maciel thought he had paid, he said, because he had bought an unlimited day pass. He didn't know he needed to tap it against a shiny, metal validator by the entrance.

The Pico station is long and slender and has two entrances at either end where the validators stand. There are no turnstiles or gates. Riders may enter without paying.

Maciel's experience points to a problem as the light-rail system rapidly expands. With many stations too small to gate, the county's rail riders will largely remain on the honor system for years. The Los Angeles County Metropolitan Transportation Authority could be out hundreds of thousands of dollars a month in lost revenue from people who don't pay to ride.

Metro officials acknowledge they don't know how many people use the system for free. This summer, gates and turnstiles at 16 subway stations were locked, forcing riders to tap their fare cards before the turnstile unlocks and lets them into the station. Audits completed before those stations were locked showed a fare-evasion rate between 5% and 6%, officials said.

"It's kind of hard to measure something that isn't there," said Metro's Deputy Chief Executive Paul Taylor.

Turnstiles could help Metro gain more revenue, officials said, but it's too early to point at a trend. Some stations have had turnstiles for months, but they were unlocked and allowed people to enter without proof of fare. By mid-January Metro plans to lock 14 stations on the Green Line and five stations on the Blue Line. The agency locked five Gold Line stations in September.

Metrolink was another factor in the delayed locking of turnstiles. The six-county commuter rail system gives riders free transfers to Metro's network. Metrolink started selling paper tickets with TAP-enabled chips this summer, at the same time the turnstiles began locking.

Metro contracts with the Los Angeles County Sheriff's Department for security and fare inspection. About 400 deputies and 100 inspectors roam the system's stations, trains and buses looking for crime and checking tickets.

The agency sees an average fare of 70 cents per rider, said Metro spokesman Marc Littman. Even though the base fare is $1.50, many people take advantage of the discounts offered to student, senior, disabled and low-income riders.

Forty-one of the 80 rail stations, including the 16 subway stations locked this summer, will be locked eventually, said Metro spokesman Paul Gonzales. The agency is looking to retrofit three stations on the first phase of the recently opened Expo Line, he said, noting that Metro estimates adding gates will cost $3.1 million. They expect to make up that cost in seven years.

Metro leases the gates from San Diego-based Cubic Corp. for $300,000 a month for the entire system, Gonzales said.

Still, the majority of light-rail stations won't ever be locked because some platforms are too small to accommodate turnstiles and others sit too close to the tracks, Metro said. If turnstiles were at some of the smaller stations, people would be lining up on the tracks trying to get through the gates.

The agency is reviewing its plans for future stations not yet under construction to see which ones can be locked, Gonzales said.

"Planning for latched gates before construction begins has the advantage of being less costly," he said. "Changing in the middle of construction can be very expensive. Doing it after the fact can be even more expensive."

When the Blue Line opened in 1990, it wasn't common to gate light-rail stations, said Juan Matute, the associate director of the Institute of Transit Studies at UCLA.

"There was a trend for proof-of-payment systems at the time," he said, adding that gates might deter people from riding the system.

Many of the system's current stations were designed and built under a policy that did not require gates, said Taylor, Metro's deputy chief executive.

"It's not really clear what's the right way to do it," he said, referring to gates or stand-alone validators. "Each has its pros and cons and so we're experimenting with different ways to do it."
Newer Post Older Post Home