In Moscow, Squat and Ride for Free 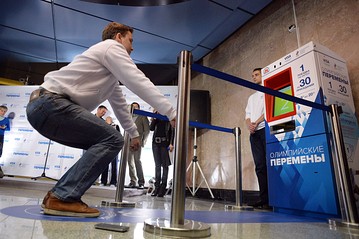 A man squats in front of a vending machine that sells subway tickets for squats instead of money during the machine’s presentation at the Vystavochaya metro station in Moscow.


MOSCOW—With just three months to go before the Winter Games begin in Sochi, Russia is pulling out all the stops to whip up the Olympic spirit.

Moscow city officials are now offering free rides on the subway to any passenger who does 30 squats before crossing the ticket barrier to enter the metro in an effort to promote physical fitness and sports, according to Russian state media reports.

Each squat will be counted by a special machine marked with the Olympic logo that will be placed next to electronic ticket vending machines.

“We wanted to show that the Olympic Games is not just an international competition that people watch on TV, but that it is also about getting everyone involved in a sporting lifestyle,” Alexander Zhukov, president of the Russian Olympic Committee, was quoted by state-run news wire RIA-Novosti as saying.

The idea is that as one ride on the metro costs 30 rubles, (92 cents), so each squat will be worth one ruble.

The free rides will be on offer for a month. The Olympic Games are set to kick off on February 7, 2014.
Newer Post Older Post Home