Japan Pitches Its High-Speed Train With an Offer to Finance 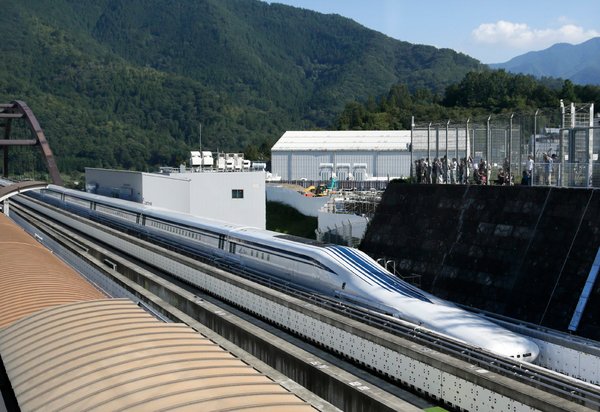 Next year, Japan plans to begin construction of its first intercity train line that uses magnetic levitation. It will link Tokyo with Nagoya and, eventually, Osaka.


TSURU, Japan — As the world’s fastest train raced through central Japan, former Gov. George E. Pataki of New York hoisted his 6-foot-5 frame into the aisle and marveled at the smoothness of the ride.

Yoshiyuki Kasai, chairman of the Central Japan Railway Company, left, with the former governor of New York, George E. Pataki, who was part of a visiting American delegation that went on a test ride of the maglev train.

“In the subway I’d need a strap, at least,” Mr. Pataki said as the speedometer hit 315 miles an hour. He hunched over to catch a fleeting glimpse of Mount Fuji through the portholelike windows. “This is amazing. The future.”

The future for Japan, perhaps. For the United States, the future is less clear. Mr. Pataki and other former American politicians were in Japan Saturday for a special test ride of the train, which uses a technology called magnetic levitation, or maglev. They are trying to bring a maglev train to the crowded Northeast Corridor that will cruise between New York and Washington at more than twice the 150-mile-an-hour top speed of Amtrak’s Acela, the fastest train in the United States.

Maglev trains could make the journey in an hour, compared with just under three hours, on a good day, for Acela. That would be considerably faster than flying, especially when getting to and from the airport is factored in. Yet this is only the latest in a series of high-speed train proposals for the Northeast Corridor, none of which has been undertaken since Acela, which began service in 2000.
To interest lawmakers and investors in the United States in the Japanese technology, Japan has offered to cover several billion dollars in costs. The commitment of Japanese taxpayer money is a sign of Prime Minister Shinzo Abe’s determination to do whatever it takes to prime the Japanese economy and to restore Japan’s fading reputation for technological prowess.

Japan’s maglev could easily become Mr. Abe’s boondoggle unless Japan can export it. Even in Japan, the maglev faces considerable skepticism. One reason is the cost, which is as breathtaking as the speed: the estimated budget for the Tokyo-Osaka line has risen to nearly $100 billion.

So Mr. Abe is looking for a prominent overseas showcase. That is why the former politicians were here.

Mr. Pataki, along with the other dignitaries on the train, including Tom Daschle, the former Senate majority leader; former Gov. Edward G. Rendell of Pennsylvania; and former Transportation Secretary Mary Peters, are helping him make the sale. Along with former Gov. Christine Todd Whitman of New Jersey, who could not make the trip, they are on the advisory board of The Northeast Maglev, a company in Washington that wants to build the Washington-New York line.

Japan has long been a pioneer in high-speed rail. It introduced bullet trains, or Shinkansen, to the world in 1964, on the eve of the Tokyo Olympics. But other countries have caught up. France and Germany developed high-speed trains that matched the Japanese speeds. China has built a high-speed network that surpasses Japan’s in its reach if not quite its speed.

To stake its claim to leadership in a new generation of faster technology, Japan plans to begin construction of its first intercity maglev line next year, linking Tokyo with Nagoya and, eventually, Osaka. In tests, the Japanese maglev has reached speeds up to 580 kilometers an hour, or 360 m.p.h., the world record for a train.

“It is truly a dream technology,” Mr. Abe said in a speech at the New York Stock Exchange in September.

When it comes to maglev, though, there is still a question of credibility. “Americans think levitation only occurs in horror movies,” Mr. Rendell said.

With the Japanese maglev, levitation occurs at about 90 m.p.h. That is when the wheels, shod with rubber tires, lift off the concrete guideway. Then the maglev train floats four inches above the U-shaped guideway, held aloft and propelled forward by superconducting magnets.

To get the American line off the ground, Japan has come up with a method of financing that is similarly novel. In a meeting with President Obama last winter, Mr. Abe offered to provide the maglev guideway and propulsion system free for the first portion of the line, linking Washington and Baltimore via Baltimore-Washington International Airport, a distance of about 40 miles.

Analysts say Japan has had trouble exporting the technology. It figures if the United States takes it, others will follow.

The Northeast Maglev, the company behind the effort, wants to raise the rest of the money from private investors and public sources. The company was founded in 2010 but only recently began ramping up its lobbying in Washington, with Mr. Daschle, now a policy adviser to the law firm DLA Piper, serving as a central figure in those efforts.

The Northeast Maglev’s chief executive is Wayne L. Rogers, an investor in renewable energy and other projects. Japanese financing would be provided by the Japan Bank for International Cooperation, which arranges support for Japanese exports.

It’s not just the cost that makes Japanese skeptical of the maglev plans. The maglev line, to be built by the Central Japan Railway Company, would pass straight through some of the most mountainous terrain in the country, including the Japanese Alps. About 86 percent of the route is to run through tunnels, creating monumental engineering challenges and raising concerns about the effects of earthquakes.

The Tokyo-Nagoya portion is not expected to be completed until 2027, with the Nagoya-Osaka stretch to follow only in 2045. The National Institute of Population and Social Security Research expects that by that time, the population of Japan will have declined to about 105 million from the current 127 million, raising questions of whether there will be enough people to ride a speedy new train.

“If you seriously take a look at its high cost and low demand, you’ll find it makes no business sense,” said Reijiro Hashiyama, a visiting professor at Chiba University of Commerce who has argued against the project for years.

Central Japan Railway insists that the new line will stoke demand — taking away business from airlines — by decreasing journey times and serving new destinations. The company, which was set up when Japan privatized its national rail system in 1987, says it will finance construction through operating cash flow, including the profit generated by its Shinkansen line.

“In the past, the United States led the way in transport technology,” said Yoshiyuki Kasai, the company’s chairman, at the control center of the maglev test track here. “Now the U.S. transportation infrastructure is in bad shape. This time, why don’t the U.S.A. and Japan lead the world together?”
Newer Post Older Post Home