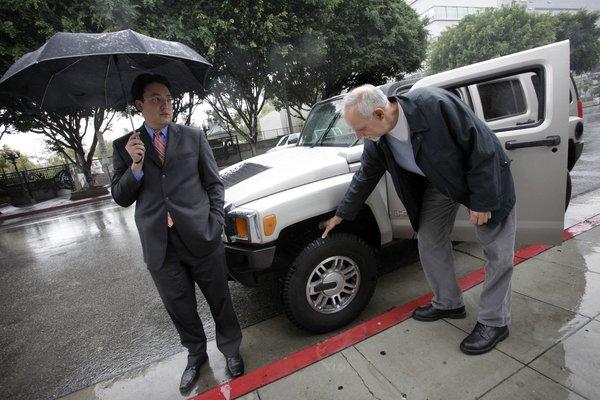 
The top executive at the Los Angeles Transportation Department is stepping down, the latest to depart under Los Angeles Mayor Eric Garcetti, the mayor's office told the Times.

Jaime De La Vega, who had been a major influence on transportation policy under former Mayor Antonio Villaraigosa, will leave the agency Dec. 1 after a two-year stint as general manager. Under his leadership, the Transportation Department shifted its emphasis toward making streets more friendly for pedestrians and cyclists.

Jon Kirk Mukri, who has been running the city's Recreation and Parks Department since 2004, will serve as a temporary replacement for De La Vega, according to Garcetti spokeswoman Vicki Curry.

[Updated, 11:15 a.m. PDT Oct. 31: In a statement, De La Vega said he was appointed in 2011 to “stabilize and turn around” the department, and that it “is in much better shape today.”
“I thank the mayor and the City Council for the opportunity to serve the city of Los Angeles,” he wrote. “I look forward to the next phase of my career.”]

De La Vega said at the time that the staff moves would improve management and that the jobs had been left vacant because of budget constraints.

When Garcetti took office July 1, he asked the city's department heads to reapply for their jobs and explain how they would achieve key goals.

A source familiar with the situation said the mayor's office plans to include candidates from outside Los Angeles in the search for a new general manager.

According to the Transportation Department's recent annual report, De la Vega's accomplishments have include synchronizing the city's 4,398 stoplights. The city also added more than 120 miles of bike lanes in the past two years.

Before he joined the department, De La Vega served as a deputy mayor to Antonio Villaraigosa and worked with the Los Angeles County Metropolitan Transportation Authority to push L.A.’s transit priorities. He helped pass Measure R, the half-cent sales tax that raised an estimated $40 billion for transportation projects in Los Angeles County.

Much of Garcetti’s public energy during his first months in office has been focused on transportation. His first executive directive as mayor launched a working group for his Great Streets Initiative, designed to transform L.A.'s main thoroughfares into more lively, pedestrian-friendly destinations.
Garcetti traveled to Washington, D.C., this week to drum up federal support for a direct mass-transit link to Los Angeles International Airport and for two Metro projects, the Downtown Regional Connector and the Subway to the Sea.
Newer Post Older Post Home