Lazaro Cardenas port has boomed in recent years, including as a hub for cartels. Now Mexico's government hopes to cut them off. 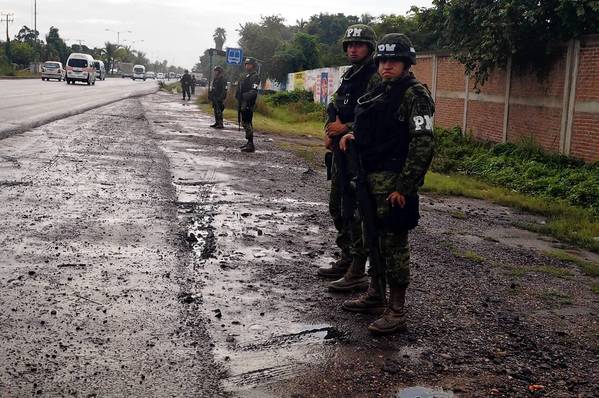 Mexican troops are among the federal forces who have taken over control of Lazaro Cardenas port from municipal police. A government spokesman said officials had received tips about “acts of corruption” and collusion with drug cartels.

MEXICO CITY — The city of Lazaro Cardenas is a scrappy Mexican success story.
The once-obscure industrial port, between Puerto Vallarta and Acapulco, has grown significantly over the last decade, using cheap domestic dock labor and a direct railroad connection to Texas to attract international cargo ships that might have otherwise gone to the Port of Los Angeles.
But it also has earned a darker reputation.

Precursor chemicals for methamphetamine are widely known to be smuggled in to Lazaro Cardenas in multi-ton batches on ships arriving from Asia: One typical bust in December 2011 netted 1,600 barrels that had originated in Shanghai. The drug barons of Mexico's wild western states are known to use Lazaro Cardenas as a receiving point for cocaine shipments from Colombia and Peru, and to ship drugs north to the United States.

The government of President Enrique Peña Nieto this week took its boldest step yet in its effort to solve the problems plaguing Mexico's second-busiest container port, sending in the military and federal police to take over security functions from the municipal police force. Federal officials hope to cut off a key source of profit for the cartels, particularly a group known as the Knights Templar, whose reign of terror has plunged much of the surrounding state of Michoacan into near-anarchy.

Experts suspect that Peña Nieto's hand was forced by the deteriorating security situation across Michoacan, an important agricultural state just a few hours' drive from Mexico City. In numerous mountain villages, the powerful Knights are locked in a vicious struggle for control of drug routes with a competing cartel and are battling a wave of armed peasant vigilante groups.

On Oct. 27, assailants believed by many to be cartel members blew up at least nine electric power plants in Michoacan and bombed a number of federally run gas stations. The attacks amplified the growing concern that the state has devolved into something worse than a mere distraction for a president who took office in December hoping to downplay the drug war and focus on the economy.

"Now it's open terrorism, and clearly the state is out of control," said Jorge Chabat, a Mexico City security expert. "As a government, you can't allow that. If Michoacan becomes ungovernable, soon your neighboring states become ungovernable, and you lose the country."

A federal government security official told The Times in June that Lazaro Cardenas had essentially fallen under the control of the Knights Templar, which had branched out into a number of legal and illegal business dealings that may have eclipsed its earnings from drug shipments at the port.

This week, the newspaper Milenio, citing federal sources, described what it called "a true gold mine" of commerce under Knights Templar control, including trade in cattle, Chinese-made fashion knockoffs, and pirated CDs and DVDs. The cartel is said to demand extortion payments from tiny bars, tortillerias and multimillion-dollar companies alike.

And yet this wide-ranging corruption appears to have done little to stymie the legitimate business of the port, which saw the number of containers it handles yearly jump from 1,646 in 2003 to more than 950,000 in 2011, according to government figures. In November last year, the Dutch company APM Terminals began construction on a $900-million deep-water container terminal at Lazaro Cardenas.

Eduardo Sanchez, Peña Nieto's security spokesman, said this week that the government had descended on Lazaro Cardenas after receiving tips about "acts of corruption" and collusion with the drug cartels. The Mexican navy is now charged with controlling the port area, and the federal police and army are patrolling the streets. Sanchez said the army would also "evaluate, and train, where appropriate" the municipal police.

Peña Nieto had already sent thousands of troops into Michoacan in May, and the new deployment at the port further jeopardizes his ability to make good on a campaign promise to move away from relying on the military to fight the nation's drug war — a strategy that was favored by his predecessor, Felipe Calderon.

"What's evident is that this idea that the security crisis could be confronted without the army hasn't worked," Chabat said this week.

What is less evident is whether the troops will be capable of bringing a long-term solution to the port. In December 2006, Calderon kicked off his own war against the narcos of Michoacan by sending in thousands of troops to the most troubled areas of the state, including Lazaro Cardenas.

The mission, a navy official said at the time, was to "practically seal the coasts of Michoacan to avert the trafficking of narcotics."