A plan to add toll lanes to 14 miles of the 405 Freeway from Long Beach to Costa Mesa is facing widespread opposition from officials and residents. The political shift has several causes. 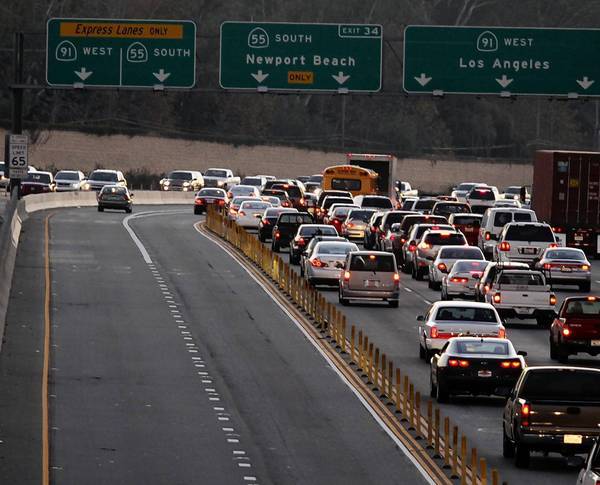 Some of Orange County's toll roads have struggled to attract drivers, and each of the major corridors has been forced to refinance its debt to avoid possible default. Above, the Express Lanes on the westbound 91 Freeway.

The "Lexus lane" was born in Orange County nearly two decades ago: Pay a toll and avoid the crushing rush hour traffic.


The first of the toll lanes offered commuters an easier ride between Orange and Riverside counties.
From there, Orange County added a network of toll roads around its booming southern end, 51 miles in all. The idea has caught on across the nation, including in San Diego and Los Angeles counties, which recently placed toll lanes on the 110 and 10 freeways.

But in Orange County, the concept may be losing its luster.

A $1.47-billion proposal to add toll lanes to a traffic-clogged 14-mile stretch of the 405 Freeway from Long Beach to Costa Mesa has met with wide opposition from officials and residents in the six cities along the route. Civic leaders said they fear the plan could be a harbinger of more toll roads to come.

"Who can afford thirty bucks a day to commute? Very few people," said Westminster Councilwoman Diana Carey, who represents one of the six cities. "We have an expression: We feel like we're not being railroaded. We're being toll-roaded."

At a meeting this month, crowds packed an Orange County Transportation Authority board meeting to denounce the lanes, which have been supported by Caltrans. City leaders expressed worry that the project would push traffic onto their streets, or that motorists traveling in the toll lanes would find it too difficult to pull off the highway and patronize local businesses.

The political shift over toll lanes has several causes. Some of Orange County's toll roads have struggled to attract drivers and each of the major corridors has been forced to refinance its debt to avoid possible default.

There has also been the sticker shock: Riding the 91 Express Lanes can cost nearly $10 each way at the most congested hours, an investment even for Lexus drivers. If the 405 toll lanes are built, the priciest one-way toll would cost $9.91.

As for the 405, much of the anger stems from what Orange County Supervisor John Moorlach called a "bit of a bait and switch." When voters approved a countywide half-cent sales tax, they were told funds would go toward adding one general purpose lane in each direction at a cost of $1.25 billion.

"If we don't take a stand against this now, then future generations will pay for it," Fountain Valley Councilman Michael Vo said.

The uproar comes as communities around the country are increasingly proposing toll lanes as a way to reduce congestion and raise revenue. The federal government has opened the door by providing money for some of the work, such as the 110 and 10 freeway toll lane projects in Los Angeles County.

"If you're using the system you're paying for the privilege to use it," he said. "It's a free-market driven choice, not a tax."

Highway authorities are also facing pressure from a federal mandate requiring that traffic on carpool lanes be sped up in some areas, including the 405, or risk losing funding and project approvals.

Robert Poole, director of transportation policy for the Reason Foundation, which advocates for toll lanes, said the heated opposition in the birthplace of congestion-priced toll lanes took him off guard.

"This strikes me as really strange in a place that's generally as individualistic and free-market oriented as Orange County," he said. "It's strange that people expect the highways, which are really, really important, to be run with equal misery for everyone."

Fred Smoller, associate professor of political science at Chapman University, sees another reason for the opposition.

"I'd imagine there is post-recession resentment of Lexus Lanes, which benefit the well-treaded 1% over the congested masses yearning to motor free."

Toll roads in Orange County have shown decidedly mixed results. The San Joaquin, Eastern and Foothill toll roads have long struggled for drivers. But the 91 Express Lanes have fared better.

According to a report by the Federal Highway Administration published last year, the 91 "by far" generates the most annual revenue in the U.S. — $41.2 million — among so-called managed lane facilities. The lanes have served as a model for similar lanes around the country, experts say.

"The whole world knows about the 91 Express Lanes in Orange County," Poole said. "They've been the inspiration across the United States for similar projects in Miami, in Houston, Dallas, Atlanta, San Francisco, Seattle, Minneapolis. All those projects came later."

For now, a decision on the lanes by the OCTA has been delayed until December. But Chamberlain warned that if local transportation officials choose not to move forward with the project, the state could require it anyway.

But "asking individuals to pay for using roads that they are accustomed to using without payment is never popular," he said.