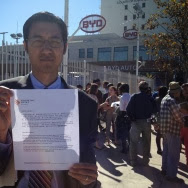 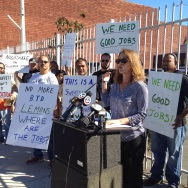 Madeline Janis, National Policy Director of the Los Angeles Alliance for a New Economy, at a demonstration in front of BYD's LA headquarters

Demonstrators on Thursday stood across the street from the downtown Los Angeles headquarters of Build Your Dreams, a Chinese-owned company that makes electric vehicles, batteries and solar panels.  BYD has agreements with the Los Angeles County Metropolitan Transportation Authority and Long Beach Transit to build electric buses, but the company is under investigation, accused of violating California labor laws.

The Los Angeles Alliance for a New Economy (LAANE)  and other advocacy groups say BYD brings workers from China, fails to pay them minimum wage and isn't delivering on past promises to create jobs in Los Angeles.

The New York Times reports BYD was paying Chinese workers in yuan, the Chinese currency.   Chinese workers reportedly told state labor investigators that they were working in Los Angeles for one to six months and living in dormitory-style housing in the San Gabriel Valley.  One worker, the Times reports, said they were earning $1.50 an hour plus a $50-per-day allowance.

"It's fine to bring over a few of their Chinese workers maybe who have special expertise to do training, but they need to be paid and treated based on our labor standards,"  said Madeline Janis, LAANE's national policy director.  "They brought people over here for $1.50 an hour plus the stipend to be accountants,  bookkeepers, sales representatives, to do the work of the company that they promised the city and transit agencies would be done by unemployed people from Los Angeles."

In a statement, BYD called LAANE and Janis' accusations "misinformation" and "incomplete."

"Questions have been raised about the wages paid to a few technology experts who are visiting here temporarily from BYD's parent company in China to train our American workforce," the statement said. "We have reached out to the California Labor Commissioner's office to address these issues and hope to reach a conciliatory and satisfactory resolution."

BYD opened its downtown Los Angeles Headquarters in October of 2011, after a heavy courtship by local and state officials.  It's $1.6 million contract with the city of LA's Community Development Department to redevelop the BYD headquarters building on Figueroa Street called for BYD to create 58 full-time jobs by August of 2015.  In an action plan at the end of the contract, BYD forecasts the creation of more than 100 jobs by August, 2013.

LAANE says the city should cut ties with BYD, and the Los Angeles County and Long Beach transit agencies should reopen the competition for contracts BYD won in both places to build electric buses.
'Monitoring' the situation.
In a statement, Jeff Millman, a spokesman for Mayor Eric Garcetti's office said, "the city is monitoring the state's investigation, which is ongoing."

BYD has a contract with the Los Angeles County Metropolitan Transportation Authority (LA METRO) to provide up to 25 electric buses.  Marc Littman, a spokesman with LA METRO says the agency is closely monitoring the contract.

"We are still more than a year away before BYD builds and delivers buses for us," Littman said.  "We're hoping the labor issues will be resolved."

LAANE's Madeline Janis says city and state agencies were eager to sign contracts that would create jobs in a hurry, but have failed to check back on BYD to see how it was holding up its end of the bargain.  Justin Ma of Asian Americans Advancing Justice agrees.

"There's a rush and there's a lot of publicity on the signing of the contract, but once that's over, the oversight and the follow through is not as exacting as we would like," said Ma, who also participated in the demonstration.

Ma's advocacy group is trying to reach out to the Chinese nationals who are reportedly working for BYD in Los Angeles, distributing a flier written in Mandarin.  The flier explains that even as a temporary worker in the U.S., they must be paid at least eight dollars an hour.  So far, he said, he's been unable to make contact with any of BYD's workers.
Newer Post Older Post Home