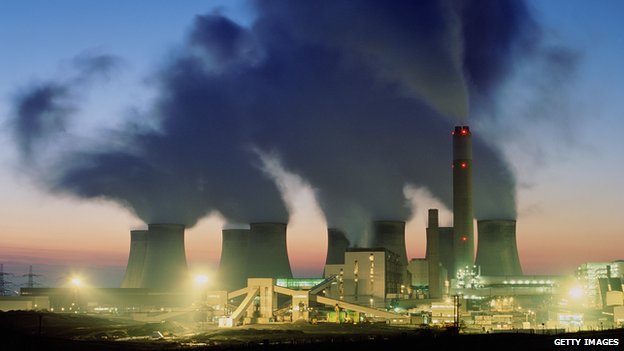 
Global emissions of carbon dioxide may be showing the first signs of a "permanent slowdown" in the rate of increase.

According to a new report, emissions in 2012 increased at less than half the average over the past decade.

Key factors included the shift to shale gas for energy in the US while China increased its use of hydropower by 23%.

However the use of cheap coal continues to be an issue, with UK consumption up by almost a quarter.

The report on trends in global emissions has been produced annually by the Netherlands Environment Assessment Agency and the European Commission's Joint Research Centre.

It finds that emissions of carbon dioxide reached a new record in 2012 of 34.5bn tonnes.

This decoupling of emissions from economic growth is said to be down to the use of less fossil fuels, more renewable energy and increased energy savings.

The main emitters, accounting for 55% of the global total, were China, the US and the European Union. All three saw changes that were described as "remarkable" by the report's authors.

Emissions from China increased by 3% but this was a significant slowdown compared to annual increases of around 10% over the past decade.

There were two important factors in reducing China's CO2. The first was the ending of a large economic stimulus package. As a result electricity and energy prices increased at half the rate of GDP.


"It is like a tiger that you have to keep under control, and you can also see in the CO2 trends, the growth is not so big."

China also achieved exceptional growth in the use of hydropower for the generation of electricity, increasing capacity and output by 23% in 2012. This alone had the effect of curbing the country's emissions by 1.5%.

In the US, the shale revolution continues to make waves. Overall emissions were down by 4% in the year mainly because of a continuing shift from coal to gas in the generation of electricity. Shale is now responsible for one third of US gas production and almost one quarter of total oil production.

"It is amazing, shale gas has been growing since 2007/8, I think it will continue but that is speculation," said Dr Maenhout.

"I think there is an economic benefit to further expansion, I am not expecting it to go down."

The other major decline came in the European Union where economic recession in the 27 nation bloc saw emissions decline by 1.3%. This was down to a decrease in energy consumption of oil and gas, with a 4% decline in road transport. 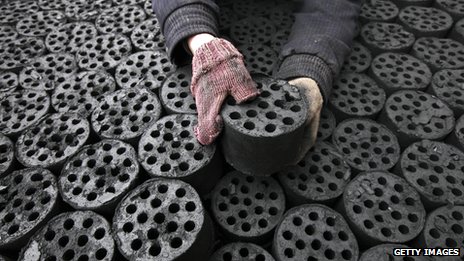 In China, a slowing economy has meant slower price increases for energy sources such as these coal briquettes

Renewable energy also continued its upward trend, at accelerating speed. It took 15 years for the renewable global share to increase 0.5% to 1.1% - but it took only six years for it to double again, to 2.4% in 2012.

Looking ahead, the report suggests that if the push for shale continues in the US, if China sticks to its published plans and if renewables continue to grow - particularly in Europe - global emissions might slow down permanently.

"It is good news but still not sufficient," said Dr Maenhout.

"We are still having increases every year which are cumulative. Since CO2 lives for 100 years in the atmosphere, we will still not be able to cope with a 2C target for 2050."

The report was welcomed by green activist Bill McKibben, who is campaigning for a divestment from fossil fuel stocks and shares.

"It is good news but nowhere near good enough," he told BBC News.

"The solution we need here is dictated by physics, and at the moment the physics is busy melting the Arctic and acidifying the ocean.

"We can't just plateau or go up less, we have to very quickly try and get the planet off fossil fuels."