Data from turnstiles show drastic drop in riders since stations have been locked, but Metro estimates ridership has actually increased 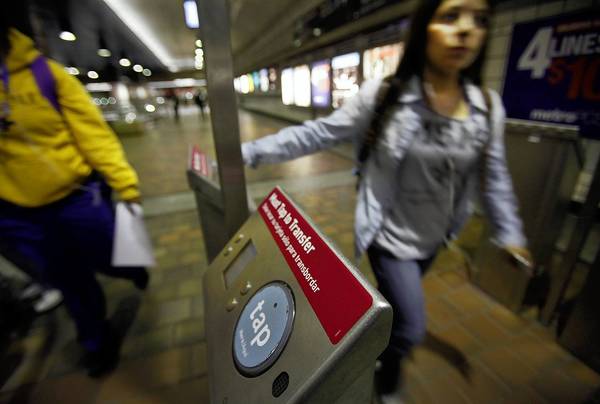 After officials began locking the turnstiles to the Los Angeles subway in June, stopping many passengers from riding for free, the volume of people entering the system may have fallen significantly, according to data reviewed by The Times.


From May through October, the number of people passing through turnstiles each month fell from 4.8 million to 4 million, according to the data. Over the same time frame, however, the Los Angeles County Metropolitan Transportation Authority's ridership estimates climbed by about 400,000 passengers.

In September, the first full month that all gates were locked, about 3.7 million people were counted entering the subway — a decrease of 23% from May.

Metro officials said they cannot explain the discrepancy, and aren't sure whether ridership has fallen or not. They cautioned that the data were preliminary.

"Metro needs to find out what's going on and why, because that's just a huge number," former Metro director Richard Katz said. "You expect the number to drop by a few percent when you make a change, but nothing that big."

The gap raises questions about how Metro calculates ridership, a statistic that helps determine future federal funding, and what effect locking the subway system's gates will have on those who depend on the mass transit system.

In June, officials began locking the turnstiles, creating the system's first barrier to prevent people from riding for free. To board now, commuters must purchase an electronic card that they scan to unlock the turnstiles.

Clicks of a turnstile are automatic and mechanical, said David Sutton, who runs Metro's fare system, but they don't account for every passenger.

For example, turnstiles aren't installed between train lines at the 7th Street/Metro Center station, spokesman Marc Littman said, so people transferring are only counted once. Some passengers also skirt the gates by going through wheelchair-accessible entrances or emergency exits, he said. Others could be switching to buses, a ridership statistic that Metro measures separately.

"I ride the system every day," Littman said. "It sure doesn't look like there's a ... drop in ridership." Officials said their current estimates meet federal accuracy benchmarks: a 95% confidence interval, with a margin of error of plus or minus 5 percentage points.

Two dozen Metro employees create the estimates by counting the people who board every train at every station during key times of the day, said Conan Cheung, a deputy executive officer for the transportation authority.

A complete count takes about six months, he said, so every estimate is a cumulative tally of boardings from the previous half-year. For example, October's official ridership estimate of 4.6 million comes from a rolling tally starting in May.

Cheung said the samplings are a "snapshot of a day" and typically average out seasonal variations or unusually high or low days. He added it could take a few months for the estimates to adjust for any drastic ridership changes.

The estimation method Metro uses differs from that of other U.S. subway systems, including New York City and Washington, D.C., which rely solely on turnstile counts, officials for those agencies said.

"[Metro] should start incorporating turnstile data into their ridership estimate for their lines that have near 100% latched turnstiles," said Juan Matute, the associate director at the UCLA Institute of Transportation Studies.

He added that he'd like to see the turnstile and fare-entry data available on Metro's website, "so that researchers and even app developers could use that data in ways we've never thought of before."
In June, the Los Angeles subway recorded 700,000 more turnstile counts than estimated riders, according to the data obtained by The Times through a public records request. By October, the data points had reversed, showing 600,000 more riders than turns of the metal barriers.

Metro officials said they don't believe the dip in turnstile counts is purely a result of fare evaders who've stopped riding. Cheung said about 80% of passengers buy a seven-day or monthly pass, which allows for unlimited trips. "To have 23% fare evasion goes against that … relationship," Cheung said.

Metro officials said they hoped to incorporate turnstile counts — and possibly electronic ticket data — into their federal ridership estimates once the numbers are validated.