This Train Is Hiding A Full Starbucks Store Inside

What if you could sit inside a cozy Starbucks during your morning commute? Now, commuters in Switzerland can do just that. 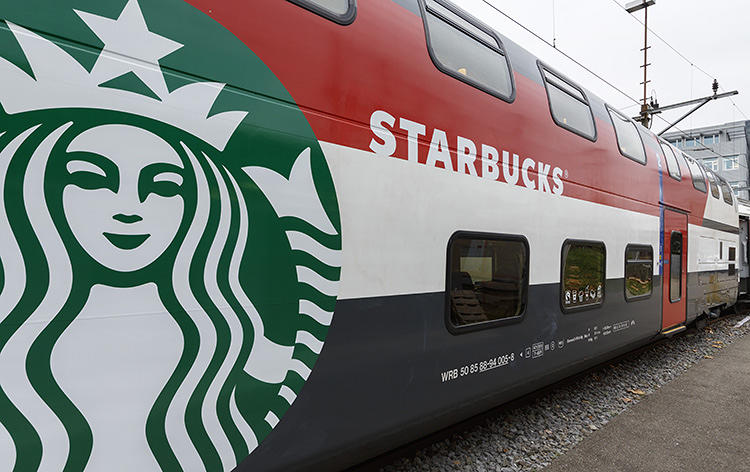 Starbucks locations already seem to be everywhere you look. But starting November 21, the company will take on a new frontier: trains. Starbucks, with the help of Swiss train company SBB, has converted a double-decker car running from Geneva Airport to St. Gallen in Switzerland into a fully functional Starbucks store, complete with wood tables, leather chairs, and, in another first for the company, waitstaff.

Starbucks is no stranger to new concept stores. Strategically, its train is probably most like its mass-fabricated popup store. It's an idea the coffee giant is putting into the wild to see if it might scale because, while big storefronts represent the core of its business, smaller, niche Starbucks offer an opportunity to expand through unused, underserved cracks.
“It was not an easy project,” says Liz Muller, director of concept design for Starbucks. “Our stores are made not just to have a wonderful drink, but to connect and have a wonderful experience. We wanted to make sure it feels like a club and that you could see a person across the room, so the train feels more spacious.”

So the challenge was not just to fit a coffee counter into the corner, but to pull in all of the elements we associate with Starbucks into a stock mass-commuting platform. That meant accounting for weight, electrical, and fire-safety requirements, of course, but it also meant attaching all those windowed bar seats, shared tables, and the cozy armchairs to the same skeleton of fasteners that seating inside a typical train car would use. In other words, Starbucks architects had to design a whole new social floor plan using the exact same anchors of an old commuter-centric one.

“Just because it’s functional doesn’t mean it can’t be engaging,” Muller says, “so we asked, ‘Why can’t we?’ Just because we’re on a train, why can’t it be more comfortable?”
The team’s standpoint was one of naivety, since they'd never designed for a train before, which led them both to learn things (like the reason you don’t see wood tables on trains is because they’re considered too flammable) and to create solutions (like bucking convention by deploying them anyway). In this case, the solution was opting to treat the wood to be flame retardant, plus use of thinner pieces wherever possible (because less wood essentially equates to less kindling). That approach still sounds simpler than it was, of course: Every table and chair was designed and built from scratch and tested by regulators.

“You design a new chair, maybe one version is light cream and one in dark cream,” Muller explains. “You build eight of each, they set them afire, and if you have a high score, you pass.”

In the end, designers were able to seat 50 commuters at once--just six fewer than a stock train car--while also having the same three core seating arrangements you find in a Starbucks store for different customers: Commuters just one stop from their destination may snag a stool at the bar, while those on a longer journey could head upstairs to sit in a plush armchair or at a shared “community table.”
“We wanted to offer you the ability to choose,” Muller explains. “If your journey is short, you might choose to sit at the bar window. But having a small community table creates the opportunity to use a laptop or have lunch.”

Furniture aside, it’s all of the small touches that make the project so compelling. The bottom floor was carpeted to absorb noise in the space. Surfaces have clocklike maple inlays to acknowledge Switzerland’s love affair with timepieces. A waiter takes and delivers an order upstairs so that people wouldn’t need to claim their seat, run downstairs to the line, and run back up--which Starbucks designers witnessed happening in their own field research. (A waiter can also serve the ground floor for good measure.) And in a very cool touch, tables are treated to have a textured surface, plus they wobble the slightest bit as a train comes into the station, to prevent spilling your coffee.

In a world of travel increasingly chasing new ways to charge for a few inches of legroom, Starbucks’s latest concept has certain promise: that travel can still be as much about the journey as the destination--assuming other companies make the effort.

“I wonder sometimes that our customers won’t understand truly what this took,” Muller concludes. And, of course, they won’t, which is a hallmark of any good design, isn’t it?