A recent graphic showing the top 10 cities with the worst commutes in the United States has a surprise for Los Angeles residents.
We are not No. 1.

For those of us who have inched along, cursing our fate and the 101-405 freeway interchange -- or fidgeted and groaned at 7:30 a.m. on the 110 Freeway while smug motorists glided by in the FasTrak lanes -- this doesn't seem possible.

But according to data compiled by the Texas A&M Transportation Institute and brought to us by Statista, the city with the worst commutes in 2012 was Washington, D.C. As the graphic shows, the annual hours of delay per commuter in the nation's capital was 67. L.A./Long Beach/Santa Ana was second with 61. Seems like it should be at least 161.

For those who feel cheated at coming in second, the L.A. Times reported on a similar traffic-congestion study in April in which we did come out on top.

[For the record, 1:15 p.m., Nov 9: An earlier version of this post incorrectly stated that the graphic listed the annual hours per day wasted by commuters stuck in traffic. The graphic measures the annual hours of delay per commuter.] 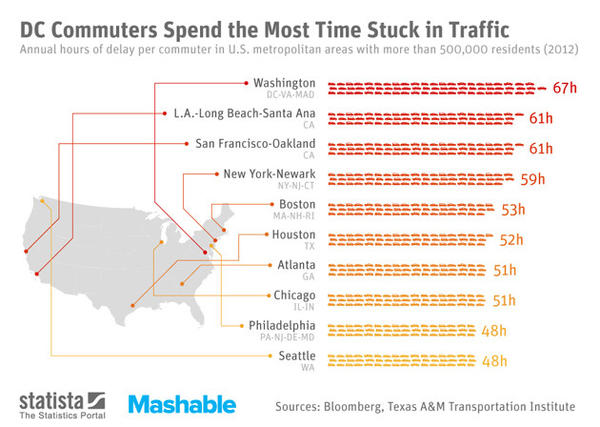