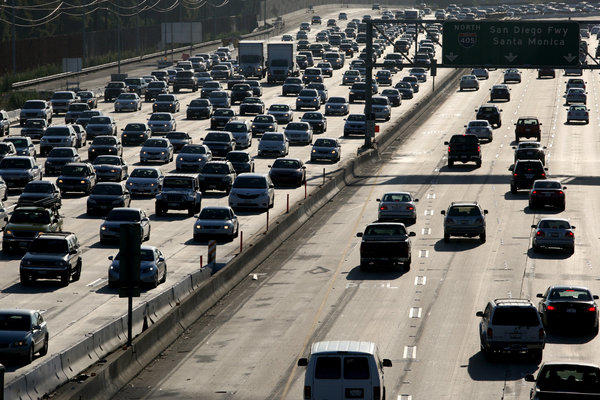 Orange County transportation officials are considering a plan to eliminate carpool lanes and add toll lanes on a 14-mile stretch of the 405 Freeway between Costa Mesa and the 605 Freeway.

A critical vote on a proposal to add toll lanes to a 14-mile stretch of the 405 Freeway in Orange County — a $1.47-billion project that would involve reconstructing overpasses and eliminating carpool lanes — has been pushed back until December.

The plan to add toll routes to the freeway — dubbed "Lexus lanes" by the mayor of one city along the route — is one of three proposed options for helping untangle the highway congestion from Costa Mesa to the county line in Seal Beach.

The most controversial of the options would add a single general-purpose lane and a toll lane in each direction. The existing carpool lanes on each side of the highway would also be converted to toll lanes.

The Orange County Transportation Authority voted unanimously Friday to delay the decision to Dec. 9, in front of a packed room of residents and elected officials, most critical of the toll lane proposal.
Before they meet again, board members said they wanted assurances from Caltrans, which oversees the state's freeways, that the OCTA would control local toll policy, such as costs and hours of operation, and get to keep excess toll revenues for local improvements.

The transit agency estimates the toll lanes would generate about $1.5 billion in revenue during the next 30 years.

"We all want to know whether Caltrans is going to bill this out to support another project," Todd Spitzer, O.C. supervisor and OCTA board member said.

Orange County was an early pioneer in the toll lane experiment when carpool lanes along a 10-mile portion of the 91 Freeway were converted to pay-to-use lanes. Toll lanes were recently added to the 110 Freeway in Los Angeles, and Orange County has an extensive network of toll roads.

The proposed toll lanes along the 405 would extend from the 73 toll road to the 605 Freeway. The endeavor is being funded by voter-approved Measure M, a countywide half-cent sales tax for transportation projects.

Ellery Deaton, mayor pro tem of Seal Beach, said the toll lanes will shift traffic onto city streets. "We will have nothing but chaos," she warned.

Steve Ray, an Orange County resident, said he was among those who voted for the transportation tax in order to improve streets and freeways.

"This is double taxation," Ray said of the proposed toll lanes. "This is not what the voters voted for."
If the lanes arrive, a rush-hour driver heading north would pay $9.91 to travel the full length of the toll lanes. Southbound drivers would pay $6.11 in tolls at rush hour, according to OCTA estimates.
Caltrans, which must approve the plan, has an interest in installing toll lanes on the 405 because of a federal mandate requiring that it speed up congested carpool lanes, said John Moorlach, a county supervisor and OCTA board member.

In September the state agency told OCTA that if it didn't choose an option that would unclog carpool lanes, it would consider installing the toll lanes.
Newer Post Older Post Home