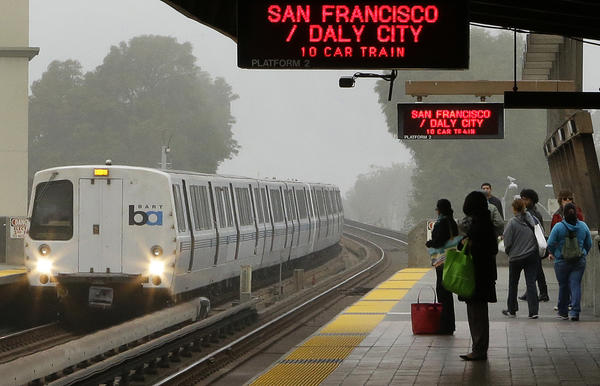 Bay Area Rapid Transit passengers wait for a train in this Oct. 22, 2013 file photo taken in Oakland. BART's tentative contract with its two largest unions may at last be headed for ratification after an admitted "error" by BART management derailed it and prompted a lawsuit.

SAN FRANCISCO — Labor discord that has dragged on since spring between Bay Area Rapid Transit and its largest unions may finally have been resolved.


Troubles at the negotiation table led to two debilitating regional commuter rail strikes, and threats of many more, that left about 200,000 weekday commuters on tenterhooks during summer and fall.

The difficulties seemed to have come to an end when BART management in October stood with leaders from Service International Union Local 1021 and Amalgamated Transit Union Local 1555 and announced a tentative contract agreement.

But it turned out that top BART officials and a high-paid outside labor negotiator all had mistakenly signed a tentative agreement that would have added six weeks of paid family medical leave to the deal.

The BART board of directors balked, removing the provision before voting to approve the rest and asking unions to take the modified deal to members for a vote. The unions responded with a lawsuit.
On Saturday, the parties said they had come to an agreement with the help of Greg Lim of the Federal Mediation and Conciliation Service, who has stepped in intermittently over the months to help the two sides bargain more constructively.

The bungled family-leave issue was resolved with "solutions that are administrative in nature and/or will be covered within BART's existing budget," the district said in a statement.

“After eight months of uncertainty for our riders, this deal will guarantee that every ounce of the agency’s focus will be directed to providing great service to the Bay Area during the peak holiday period and beyond,” General Manager Grace Crunican said.

The Family Medical Leave Act guarantees 12 weeks of unpaid leave annually, and workers have been free to use vacation, sick time or floating holidays to cover the time. A union proposal that BART pay for six of those weeks never gained traction at the bargaining table, but it was nevertheless included in a stack of tentative agreements signed by BART officials.

Crunican said that under the negotiated compromise the district’s bereavement leave policy will be expanded to allow workers paid time off in the event of the death of a grandchild or stepparent of a spouse or domestic partner; employee breakrooms at two stations will be upgraded, and "qualifying" employees will be granted more flexibility in how they pay for the costs of their family medical leave.

“Today we’re proud to announce that we’ve reached a resolution that we can bring back to our members for a vote,” SEIU Local 1021 BART Chapter President John Arantes said in a Saturday statement, calling the resolution "fair."

“BART management has been adamant in their admission of a mistake and how they’ve handled the situation,” Arantes continued, “and, in the past few days, we’ve had the opportunity to have meaningful discussion and resolve some of our differences at the bargaining table."

"We expect the BART board will now do its part and do what they should have done all along ... approve this contract," she said. "Once they do, we will ask our members to ratify it as well.