Californians deserve to know how a bullet train will be financed

The rail authority's chairman has some ideas, but we haven't heard from Gov. Brown. 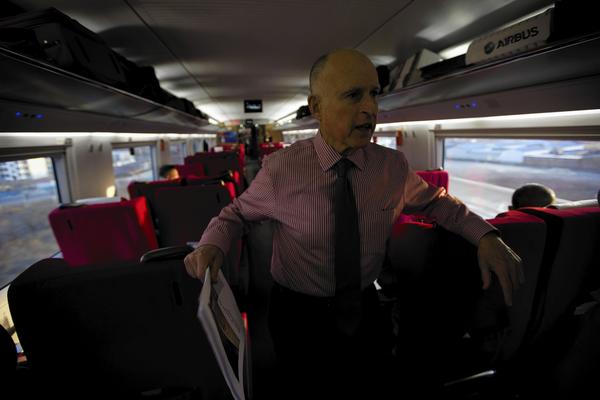 Gov. Jerry Brown speaks to journalists on board a high-speed train in Beijing in April. He has called bullet-train skeptics “declinists.”

SACRAMENTO — Let's stipulate that a bullet train zipping between Los Angeles and San Francisco would be grand and groovy. But to quote a great movie line, "Show me the money!"

And it's what a judge, former bullet backers and many citizens have been trying to tell an obstinate Gov. Jerry Brown.

It's astonishing that a seasoned governor who fancies himself a prudent spender refuses to recognize the need to secure financing before embarking on the largest public works project in California history.
It's like a middle-class family starting to build a mansion before obtaining a loan.

All we hear from the starry-eyed governor is that skeptics are "declinists" who "sit around and mope and navel-gaze.... We have to suck it up."

Brown equates critics of the bullet train with initial opponents of the transcontinental railroad, the Panama Canal, the Golden Gate Bridge, the interstate highway system and the State Water Project, among other ambitious endeavors. But that's distorting history. Those projects were paid for by dedicated revenue streams — fuel taxes, water fees, bridge tolls — or the federal government.
If European and Asian countries can build high-speed rail lines, the governor asserts, there's no reason California can't. But they're countries. We're a state. No state has ever created a bullet train. And unlike Washington, Sacramento can't print money.

California's 500-plus-mile rail project is projected to cost $68 billion, double what voters originally were told. But we only have roughly $13 billion — less than $10 billion in state borrowing authorization and $3 billion-plus in federal grants — with no other funding in sight.

Regardless, Brown plans to begin initial construction early next year, laying 130 miles of track from Madera to Bakersfield in the San Joaquin Valley, then extending the line over the Tehachapi Pass into Palmdale and continuing to the San Fernando Valley at a total cost of $31 billion.

But he'll need to clear it with a court. A Sacramento judge ruled recently that the California High-Speed Rail Authority could not tap into the state money because it had failed to comply with requirements of the 2008 voter-approved bond act. They include identifying all the funds needed to complete the first fully operational segment into the San Fernando Valley.

I phoned Dan Richard, Brown's hand-picked chairman of the rail authority, to ask where he planned to find all the needed construction money — so we wouldn't wind up stuck with just a short line connecting some farm burgs.

"Well, I don't know," he replied, refreshingly candid. "The best answer" he could give, he said, was that he had a good sense of where to look.

First off, said the former Bay Area transit official, retired utility executive and infrastructure financier, that $68-billion figure is adjusted for future inflation. In today's dollars the cost would be around $52 billion.

"Every high-speed rail system in the world, once built, covers their operating costs from the fare box," he continued. "Because of that, it becomes a very attractive investment opportunity. We'll ask, 'Who wants to come in and operate this and make money?'"

There are no takers so far, and that shouldn't surprise anyone, he said. The private sector "won't take that kind of risk early in a project. We need some ridership first. Then they'll bid on the right to operate the train. And that will help build the next leg. That's fully a third of the cost."

There'll be "lots of revenue opportunities," Richard insisted. "There's all kinds of stuff that we haven't scratched the surface."

He envisions leasing rights-of-way beneath and alongside tracks for such things as fiber-optic cables — and land around stations for real estate development.

"Let's take it a leg at a time," he said, referring to the financing.

And once the track-layers come within striking distance of Palmdale and the L.A. Basin, he predicted, there'll be a great desire to complete that segment. Local governments might kick in money. Congress could even shake loose more.

But Richard said there's no thought of asking California voters for additional bond money. Polls have shown that if voters had another shot at the project, they'd derail it.

"Once we've connected the [San Joaquin] valley to L.A." around 2020, he said, "we can start running full-scale high-speed operations. And start building from Madera to Gilroy to San Jose."

Richard objected to my referring to this as a financing "concept." That sounds weak, he insisted. "We're looking at revenue models that have been demonstrated around the world. It's a playbook that works. It's stronger than a concept."

"I don't want to sound Pollyannaish," he added, "I don't have all the answers. But I do have a sense of vision. We're going to take it in stages. We're building a critical infrastructure system. And I think it's going to transform this state in ways that people haven't even thought of."

But he won't be showing you the money. Neither will the governor. They can't.

Brown, however, could learn from Richard. He could seriously address doubters' legitimate concerns. Stop insulting them. Try selling rather than slurring.