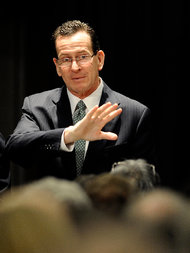 Gov. Dannel P. Malloy of Connecticut is leading an effort by Eastern governors to reduce pollution from out-of-state sources.

WASHINGTON — In a battle that pits the East Coast against the Midwest over the winds that carry dirty air from coal plants, the governors of eight Northeastern states plan to petition the Environmental Protection Agency on Monday to force tighter air pollution regulations on nine Rust Belt and Appalachian states.


The East Coast states, including New York and Connecticut, have for more than 15 years been subject to stricter air pollution requirements than many other parts of the country. Their governors have long criticized the Appalachian and Rust Belt states, including Ohio, Kentucky and Michigan, for their more lenient rules on pollution from coal-fired power plants, factories and tailpipes — allowing those economies to profit from cheap energy while their belched soot and smog are carried on the prevailing winds that blow across the United States.

All the governors on the petition are Democrats. Gov. Chris Christie of New Jersey, a Republican and a potential presidential candidate in 2016, has not signed it.

The petition comes the day before the Supreme Court is to hear arguments to determine the fate of a related E.P.A. regulation known as the “good neighbor” rule. The regulation, officially called the Cross-State Air Pollution Rule, would force states with coal pollution that wafts across state lines to rein in soot and smog, either by installing costly pollution control technology or by shutting the power plants.

Even if the regulation is upheld, the Eastern governors are seeking stronger constraints on pollution from the Midwest and Rust Belt states.

The Obama administration issued the “good neighbor” rule, which would apply chiefly to power plants in 27 states east of Nebraska, half of the country, in 2011, but the United States Court of Appeals for the District of Columbia Circuit struck it down, ruling that the E.P.A. had not followed the Clean Air Act when it calculated how to assign responsibility for cross-state air pollution. The rule is part of President Obama’s growing effort to use E.P.A. regulations to crack down on coal pollution.

In the case before the Supreme Court, the E.P.A. argues that the cross-state air rule, which it is required to issue under the Clean Air Act of 1990, is necessary to protect the health and environment of downwind states. The utilities and 15 states on the other side argue that the rule, as written by the Obama administration E.P.A., gives the agency too much regulatory authority and places an unfair economic burden on the states.

The Supreme Court is allowing 90 minutes to listen to arguments, rather than the traditional 60 minutes, signaling that the justices have a particularly keen interest in the case.

Like the petition from the Northeastern governors, the court case reflects the growing anger of East Coast officials against the Appalachian states that mine coal and the Rust Belt states that burn it to fuel their power plants and factories. Coal emissions are the chief cause of global warming and are linked to many health risks, including asthma and lung disease.

Gov. Dannel P. Malloy of Connecticut, who is leading the effort by East Coast governors to crack down on out-of-state pollution, called it a “front-burner issue” for his administration.

“I care about this because it’s put Connecticut at an economic disadvantage,” Mr. Malloy said in an interview. “We’re paying a lot of money to remove these compounds from the air. That money is reflected in higher energy costs. We’re more than willing to pay that, but the states we’re petitioning should have to follow the same rules.”

Mr. Malloy said that more than half the pollution in Connecticut was from outside the state and that it was lowering the life expectancy of Connecticut residents with heart disease or asthma. “They’re getting away with murder,” Mr. Malloy said of the Rust Belt and Appalachia. “Only it’s in our state, not theirs.”

Judging by history, environmental advocates said the governors’ petition had a good chance of success. In 2000, for example, the E.P.A. granted petitions from Connecticut, Massachusetts, New York and Pennsylvania to require 12 states, including Ohio and Indiana, to control nitrogen emissions from nearly 400 large coal- and gas-fired power plants.

In the last three years, Republicans and the coal industry have campaigned aggressively against the E.P.A. regulations as they have accused Mr. Obama of waging a “war on coal.”

Across the Midwest, many lawmakers see the regulations as a serious economic threat.

Representative Fred Upton, the Michigan Republican who is chairman of the House Energy and Commerce Committee, has said that the cross-state air rule will force families to face “the threat of higher power bills, less reliability and job losses.”

Murray Energy Corporation, an Ohio-based coal company, is among the parties suing the E.P.A. in the Supreme Court. Gary Broadbent, a spokesman for the company, called the cross-state air rule “absolutely irrational, exorbitantly expensive,” and said it “would kill thousands of jobs, with no environmental benefit whatsoever.”

The Northeast has long had some of the nation’s dirtiest air. In the 1970s and 1980s, East Coast pollution was produced largely by dense cities and busy highways, particularly Interstate 95. A 1990 clean-air law placed tight regional restrictions on pollution from ozone, a primary contributor to smog, on the New England states as well as on New York, New Jersey, Pennsylvania, Delaware, Maryland and the metropolitan area of Washington.

But East Coast governors say that after a decade of cleaning up their air — by, for example, putting “scrubbers” on smokestacks and requiring vehicle emissions tests, which are not mandatory in many other parts of the country — they have squeezed all the pollution they can out of their economies. While Northeastern air is often still so polluted that it violates federal law, the governors say that is because of a problem they cannot control: the wind pattern across the continental United States that typically blows from west to east.

At the same time, Midwestern states enjoy the benefits of fresh air blown in from the Mountain West. E.P.A. data cited in briefs for the Supreme Court case shows that in many parts of Eastern states, half or more of the smog and toxic air pollution originates from out of state. The briefs say, for example, that 93 percent of the ozone pollution in New Haven, Conn., originates from out of state.

The soot, smog and toxic chemicals like sulfur dioxide and nitrogen oxide that spew from smokestacks and tailpipes are linked to severe health risks. The E.P.A. estimates that the Cross-State Air Pollution Rule would prevent up to 34,000 premature deaths, 15,000 nonfatal heart attacks, 19,000 cases of acute bronchitis, 400,000 cases of aggravated asthma and 1.8 million sick days a year.

Coal industry advocates say that adding new regulations to those states would not make a difference to air quality on the East Coast.

“It’s been very convenient for Northeastern states to blame their ozone problem on Midwestern power plants, but they’re a very small part of the problem,” said Jeffrey Holmstead, an assistant administrator for the E.P.A. during the administration of George W. Bush who now lobbies on behalf of coal companies. “It mostly comes from all those vehicles and businesses along the Eastern Seaboard.”
Newer Post Older Post Home