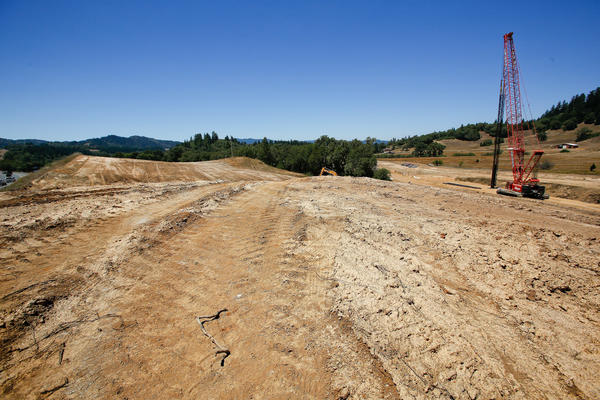 A massive four-lane freeway bypass requiring wetlands compaction is being built by Caltrans in the small town of Willits in Mendocino County. A federal judge has rejected a lawsuit by opponents hoping to block the project.


SAN FRANCISCO — A federal judge has rejected legal claims by environmental groups that sued Caltrans and the U.S. Army Corps of Engineers in hopes of stopping construction of a controversial freeway bypass in Willits, Calif.


The four-lane bypass that will carry U.S. 101 traffic around the Mendocino County town rather than through its Main Street heart was first proposed a half-century ago, and local officials long expressed unanimous support for it.

Robust opposition emerged, including prolonged tree- and crane-sits earlier this year and the 2012 lawsuit that claimed the agencies had violated the National Environmental Policy Act and Clean Water Act in approving project permits.

In rejecting the claims late last week, U.S. District Court Judge Jeffrey White said the project reviews were adequate and neither entity acted in an "arbitrary or capricious manner" in their handling of changes.

Construction of the massive bypass, which required the compacting of wetlands in Little Lake Valley, is already about 30% complete and the ruling all but assures that it will continue to move forward.

Critics have claimed that a less-environmentally destructive two-lane bypass would have adequately solved the town's traffic gridlock but was never considered by Caltrans. They also assert that Caltrans used poorly calculated traffic volumes to justify the need for the largest possible bypass.

"It's disappointing that the court accepted Caltrans' inadequate review and flawed rationale for the purpose and need of this project," said Aruna Prabhala, staff attorney with the Center for Biological Diversity, among the groups that sued.

"We disagree with the determination that the environmental impacts of the Willits Bypass project are not significant — Little Lake Valley is being devastated by the construction," Prabhala said.

"Unfortunately, this is just one of the irrational and expensive highway projects Caltrans is pushing throughout the state that will cause extensive environmental damage without solving traffic or safety concerns."

Caltrans is implementing a hefty mitigation plan to compensate for wetlands removal.

In a statement, the director of the state transportation department said Caltrans "takes seriously its responsibility to preserve the species and habitats on these lands and we are pleased that the judge rejected this lawsuit.

"This project eliminates a chronic traffic bottleneck while enhancing fisheries and hundreds of acres of local wetlands," Malcolm Dougherty said.