In a Car-Culture Clash, It’s the Los Angeles Police vs. Pedestrians 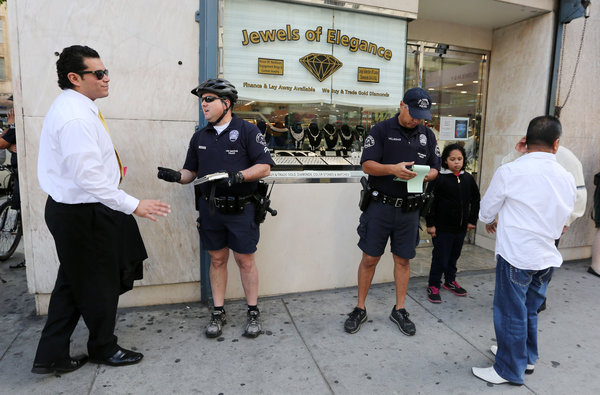 A police crackdown on jaywalking in Los Angeles carries with it a $197 fine for offenders.

LOS ANGELES — In a city of seemingly endless highways — with its daily parade of car accidents, frustrating traffic jams and aggressive drivers — the Los Angeles Police Department these days is training its sights on a different road menace: jaywalkers.


It is not quite “Dragnet,” but the Police Department in recent weeks has issued dozens of tickets to workers, shoppers and tourists for illegally crossing the street in downtown Los Angeles. And the crackdown is raising questions about whether the authorities are taking sides with the long-dominant automobile here at the very time when a pedestrian culture is taking off, fueled by the burst of new offices, condominiums, hotels and restaurants rising in downtown Los Angeles.

“We have to encourage this, not discourage this,” said Brigham Yen, who writes a blog on downtown development, as he stood at a bustling corner in the city’s financial district at lunchtime the other day, casting an eye around for a police officer in the shadows. “We should let pedestrians in L.A. flourish. We shouldn’t penalize it.”

The police say they are simply trying to maintain order at a time when downtown Los Angeles, once a place of urban tumbleweeds and the homeless, is teeming with people competing for pavement with automobiles. “There’s a huge influx of folks that come into the downtown area,” said Sgt. Larry Delgado of the Central Traffic Division. “If you go out there, you are going to see enforcement.”

Still, the enforcement has struck many of the pedestrians — the new kids on the block — as more than a little one-sided and strikingly strict. When Adam Bialik, a bartender, stepped off the curb on his way to work at the Ritz-Carlton a few blinks after the crossing signal began its red “Don’t Walk” countdown, he was met by a waiting police officer on the other side of the street and issued a ticket for $197.

These pedestrians are confronting not only the police, but a historically entrenched car culture that has long defined the experience of living and working in Los Angeles. With its wide streets, and aggressive motorists zipping around corners, cutting in and out of lanes and sneaking past red lights, Los Angeles is hardly built for people who prefer to walk.

Yet times may be changing. There are an increasing number of people using bicycles, taking advantage of an expanding network of bike lanes. Los Angeles is in the midst of a major expansion of its subway and bus system. Much of the urban planning in recent years, particularly downtown and in Hollywood, is intended to encourage people to give up their cars in favor of public transit, walking or biking.

From that perspective, the crackdown is a coming-of-age moment for this city, a ratification of how far it has come. It is a matter of simple mathematics: There are now enough people around to ticket.

When Charlie Beck, the Los Angeles police chief, appeared on KPCC, a public radio station, for his monthly call-in program last week, he was repeatedly asked about the focus on pedestrians. Chief Beck said the crackdown was a matter of public safety and traffic flow, noting the frustration of drivers trying to make turns and faced with crosswalks filled with people.

“This is the most crowded period of the year in downtown,” Chief Beck said. “A lot of that traffic can be impeded by pedestrians who are not following the rules in crosswalks.”

But a number of people argue that Los Angeles is taking the wrong side in this pavement tug of war, and failing to adjust to changing times.

“L.A. needs jaywalking,” said Nelson Algaze, a Los Angeles architect who was born in Sheepshead Bay, Brooklyn, lives in Manhattan Beach and works downtown. “It’s so stupid. What it does is it inhibits the vitality of Los Angeles. When you go to New York, when you go to Chicago, when it’s safe to cross the street, you just cross the street. You just do it.”

“There is an issue of people walking across the street with little consideration of the fact that there are cars, they clearly walk out in the middle of the countdown and take their time to cross the street,” she said. “But I’m not sure that a task force to ticket people indiscriminately is the best policy. I don’t know if I want someone’s first experience in downtown to be a ticket for jaywalking.”

Jeff Grotke, 49, a bankruptcy lawyer who works downtown, said he crossed a street midblock on the way to Bankruptcy Court when there was not a car in sight. He was stopped by two officers and given a ticket.

“Honestly, I cussed them out for about five minutes,” he said. “I told them what a stupid waste of time this was, and wasn’t it great that they had two police officers standing there when there are obviously more important issues out there.”

The police said that they had not yet broken down summonses issued in that part of the city to pedestrians and drivers, which would document how intense the crackdown is. But Sergeant Delgado said there had been nearly 125 accidents involving pedestrians and motor vehicles this year, and that was before the onset of the holiday season.

“We have a big area where people use cars and there are pedestrians walking around,” he said. “So it’s more important to control that and have some civility.”

This has proved particularly perplexing for anyone who has spent time in other cities where jaywalking is hardly a police priority, and people do not think twice of stepping off the curb after the Don’t Walk sign flashes on. (A little-known fact: It is also illegal in New York to step off a curb the moment the light starts blinking red. But it is rarely enforced and even when it is, the fine is $50. )

“You can always tell someone from California in an East Coast city, because they are the ones waiting at a crosswalk,” Chief Beck said, adding, “Jaywalking seems to be a sport every time I go there.”

Many people moved downtown precisely because they do not want to drive. “They want that sense of, this is an urban area where we are going to be able to walk everywhere, bring our own bags to the supermarket,” said Mr. Bialik, 27, who grew up in San Francisco.

At lunchtime the other day, crowds surged at the intersection of Figueroa and Seventh Street, the red warning light blinking for 16 seconds for people wanting to cross Figueroa. Mr. Yen, the downtown blogger and advocate, watched the scene with barely restrained glee.

“This is the busiest intersection in downtown Los Angeles,” he proclaimed. “Look at all these people! It’s beautiful. It reminds me of New York.”
Newer Post Older Post Home