China's doctors are beginning to speak of a link between air pollution and lung cancer. Children as young as 8 have been treated. 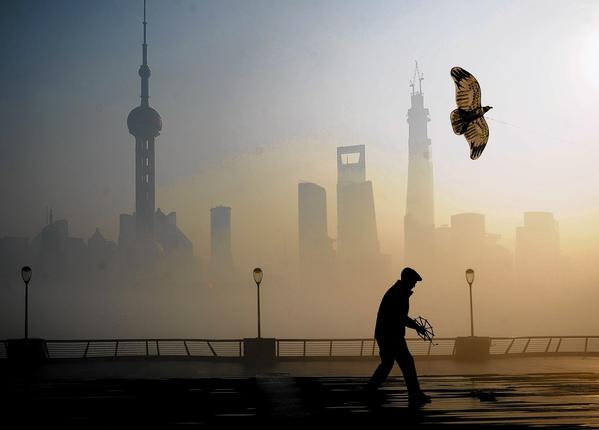 A man flies a kite in Shanghai. This month, the city had an air pollution reading of 500 for the first time, prompting authorities to order children and the elderly to remain indoors. Beijing and other parts of northern China have pollution that is even higher.

BEIJING — The youngest known lung cancer patient in eastern China is an 8-year-old girl whose home is next to a dust-choked road in heavily industrialized Jiangsu province.


Another patient was a 14-year-old girl from Shanghai, the daughter of two nonsmokers with no family history of lung cancer.

Back in the 1970s, when Bai Chunxue was in medical school, the textbook lung cancer patient was a chain-smoking male in his 60s. Nowadays, Bai, one of the physicians who treated the teen, sees so many who are still in their 20s that the cases blend together.

"When I see patients who are not smokers with no other risk factors, we have to assume that the most probable cause is pollution," said Bai, who works at Shanghai's Zhongshan Hospital and is chairman of the Shanghai Respiratory Research Institute.

Increasingly, other Chinese physicians are reaching the same conclusion. At a time when cigarette smoking is on the decline in China, the nation is facing an explosion of lung cancer cases.

From 2002 to 2011, the incidence of lung cancer in Beijing rose to 63 cases per 100,000, from 39.6, according to municipal health authorities. Nationwide in the last three decades, an era in which China opened up its economy and industrialized, deaths from lung cancer have risen 465%.

In a country that manufactures 1.7 trillion cigarettes a year, smoking is still cited as the leading cause of lung cancer. But these days, only about half of Chinese men smoke, down from 63% in 1996.

The additional culprit, doctors believe, is the fine particulate matter known as PM 2.5, the microscopic particles from exhaust, coal smoke and vehicle fumes that can burrow their way into lungs.

Readings in Beijing and elsewhere in northern China frequently climb straight off the chart devised by the World Health Organization, which classifies particulate levels between 300 and 500 micrograms per cubic meter as hazardous.

The northeastern city of Harbin practically closed down for two days in October when readings approached 1,000, creating air so murky that residents said they couldn't see their dogs at the end of the leash.

The episode was reminiscent of the famous London smog of December 1952, when deadly pollution caused in large part by the burning of coal lasted for five days, leading to an estimated 12,000 premature deaths, according to a 2002 study by British health officials.

As with London, the Harbin "airpocalypse," as it was dubbed, was caused mostly by coal, which remains the major heating source in China. In January, Beijing experienced levels of pollution nearly as high; this month, far-less-polluted Shanghai hit the 500 level for the first time, prompting authorities to order children and the elderly to remain indoors.

Although China's Communist Party is more candid about pollution than it used to be, the topic remains a sensitive one. Many Chinese doctors and researchers turn down requests for interviews, saying it's too risky to speak to foreign journalists.

Wei Zhang, a Chinese-born cancer researcher at the University of Texas MD Anderson Cancer Center in Houston, said he was stunned that so few speakers mentioned pollution at a major conference on cancer last month in Tianjin.

"In the plenary session, I think I was the only person who brought up the term 'air pollution,'" Zhang said.

Though the Chinese news media are replete with stories about pollution, connecting the dots between dirty air and the rising cancer rate is risky. The doctor who first disclosed the case of the 8-year-old girl with lung cancer last month to a reporter from the state-run China News Service appears to have been publicly silenced.

"There was a misunderstanding. I can't do an interview," said Feng Dongjie of the Jiangsu Province Tumor Hospital in Nanjing.

Researchers at Fudan University School of Public Health in Shanghai were chastised last month for reporting on an experiment in which water contaminated with fine particulate matter was injected into the lungs of laboratory rats.

Photos of the blackened lungs went viral on Chinese social media sites before China's state media jumped in, running large editorials attacking the researchers for injecting the solution rather than letting the mice breathe polluted air.

"The dramatic imagery whipped Net users into a frenzy," complained the Global Times, a newspaper close to the Communist Party, which went on to quote the chief researcher on the experiment, Song Weimin, saying that "the effects have been exaggerated in media reports and the effects on humans will not be so severe."

European researchers, however, say the techniques used at Fudan are legitimate.

"Injection is a fairly standard procedure with animal experiments because it is very hard to do inhalation studies with rodents. They are not very cooperative in that way," said Dana Loomis, a leading expert on outdoor air pollution with the World Health Organization's International Agency for Research on Cancer.

In October, the agency formally classified outdoor air pollution as a major carcinogen.

"With the levels of pollution existing in Europe, the risks associated with exposure to air pollution are comparable to passive smoking," Loomis said. "You could expect higher risks in more polluted areas."

Another WHO agency reported in 2010 that air pollution was responsible for 3.2 million deaths worldwide, 223,000 of them from lung cancer. About half the cases are believed to have been in Asia.

Yet research on the connection between pollution and lung cancer remains in its infancy in China.

To learn more, researchers say, Chinese health authorities must establish cancer registries, collecting case histories of new patients. Those records then must be matched with detailed air pollution data going back over the years it takes for lung cancer to develop.

"It is not going to be easy laboratory research. You need to buildup an infrastructure over time," Zhang said. "And of course, the Chinese government has to come on board so researchers don't feel like they're doing something secret."