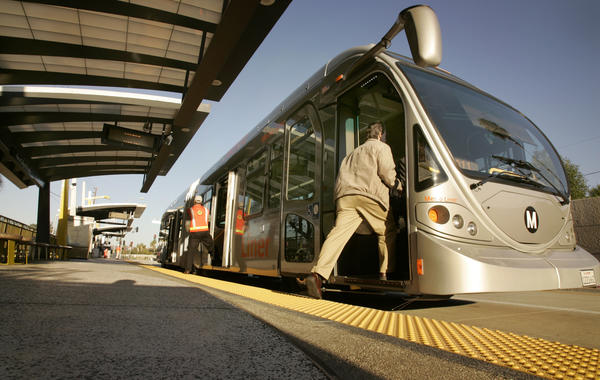 In this file photo, commuters board the Orange Line at Winnetka's Pierce College station, where neighbors have been complaining of public urination.


A year and a half ago, residents in a Winnetka neighborhood began to complain that bus riders were ducking off the Metro Orange Line and into a nearby alley to relieve themselves.


The most cavalier perpetrators urinated on front lawns. The stench wafted into homes. One homeowner found dirty diapers scattered across the ground.

Faced with such complaints, the Los Angeles County Metropolitan Transportation Authority voted Thursday to study ways to stop passengers at the Pierce College Station from "creating their own bathrooms." The nearby alleyways and sidewalks aren't Metro property, but the agency has a responsibility to keep stations "clean and safe," directors said.

Two stations along the Orange Line, in North Hollywood and Van Nuys, have self-cleaning bathrooms installed and paid for by the city of Los Angeles, according to Metro spokesman Rick Jager.

The Orange Line, a 14-mile busway that connects North Hollywood to the Warner Center, averages about 30,000 riders a day. Metro may have to bend its policy and install a portable toilet for passengers, Metro directors Zev Yaroslavsky, Michael Antonovich and Paul Krekorian wrote in their motion, if the problem can't be solved another way.

"No one could go out of their way to make up this kind of story," said Eric Lewis, the president of the Winnetka Neighborhood Council. "There’s an actual problem, and it's a big one."

Most offenders appear not to be transients, but students at Pierce College, Lewis said. A homeowner recently saw two men urinating in the alley, each with books under his arms.

The Orange Line opened in 2005; urinating in public has been illegal in Los Angeles since 2003. But a patchwork of jurisdictions has made enforcing the law near the Orange Line more difficult, Lewis said. Metro owns the busway, which is patrolled by the Los Angeles County Sheriff's Department.

But the surrounding area, including the alleys, is the purview of the Los Angeles Police Department.
“If you gotta go, you gotta go,” Lewis said. “But it sure would be nice if you could plan ahead a little better and go a few hundred yards to the south.”

Even if a portable toilet is installed, Lewis said, education will be another issue. If riders don't know where to look for a bathroom, the solution will be ineffective.

Options could include building an additional parking lot or a parking garage, or providing parking as a joint-development agreement, the motion said. Metro staff will report back on the proposed parking expansion in March, as well as possible pedestrian and bicycle improvements.