The 2-peso bump inspires a civil disobedience movement, underscoring how close to the economic edge many Mexicans find themselves. 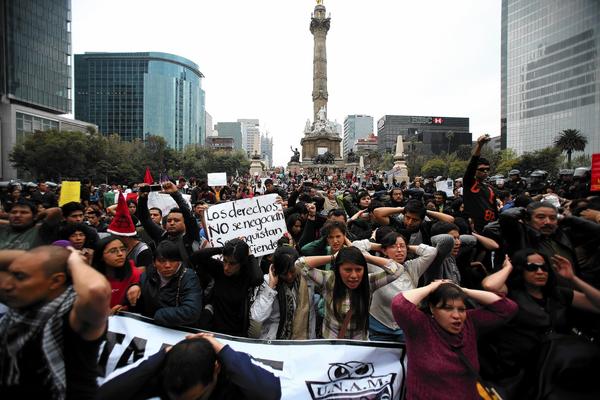 Demonstrators protest the 2-peso Mexico City subway fare increase. The city hopes to finance improvements for the run-down system, built in the 1970s and '80s.

MEXICO CITY — It's only a matter of a couple of pesos. On the other hand, it's a 66% fare increase — and it's got many Mexico City residents hopping mad.


A recent increase in subway fares in Mexico City has touched off a protest movement of civil disobedience — with infuriated young commuters jumping over turnstiles to make their point — and has ignited a new round of political trouble for the capital's besieged mayor.

Hoping to offset rising costs and promising to finance improvements, city officials approved an increase from 3 to 5 pesos for a ride on the heavily subsidized metro system. That's the equivalent of a leap from just under 25 cents to almost 40 cents.

Reaction has been fierce, with incensed protesters encouraging fellow travelers to join them in jumping.

"It is unfair and an insult to minimum-wage earners," said philosophy student Marcos Aguirre Cruz, 19, who was loudly demonstrating last week at the Pantitlan metro stop. He is part of the movement organized largely through social media with the hashtag, "Pos me salto," which means, roughly, "Well, I'll just jump."

Aguirre was urging others to leapfrog the ingress. Some obliged; older commuters ducked underneath when hurdling proved a bit difficult. Police stood by, laughing.

Mexico City's vast subway system transports 5 million people a day across one of the Western Hemisphere's largest and most traffic-choked megalopolises.

Mostly built in the '70s and '80s, it is an essential mode of transportation for its users. But it is notoriously run-down, plagued by pickpockets, dirt, poor service and a mini-army of annoying street vendors allowed to roam the overcrowded trains, where passengers are often packed as tight as cigarettes.

"I paid for my ticket, but these kids are right," said homemaker Rosaura Diaz Garcia, 47. "Prices for everything go up, and the salaries don't begin to cover it, and this metro doesn't even give good service. I had to wait more than 20 minutes yesterday for a train."

The pesos add up, considering that many workers must take a combination of subway and bus to get to their jobs, and pay separately for each leg of the trip.

The furor makes it clear just how close to the economic edge many Mexican families find themselves. Nearly half the workforce is employed in the precarious informal economy, and even for wage earners formally employed, the pay is low. The government announced that minimum wage will go up Jan. 1 by 21/2 pesos, to the equivalent of about $5 a day.

Protesters are also angry that the fare was increased with only minimal consultation. Many say they feel powerless against authorities who dictate measures that have a significant effect on their pocketbooks but then produce little to show for it. Many suspect that through corruption or waste, the higher ticket price will not translate into better service or other improvements.

One of the biggest casualties is Mexico City Mayor Miguel Angel Mancera, who was elected last year by an overwhelming majority but today is widely criticized for a series of municipal maladies, including crime and overbuilding along with the condition of the subway network.

"I want to tell Mancera," said commuter Mariana Escalona, a 22-year-old engineering student, "that when the subway stations are clean, when there are more trains, when the vendors are gone, when there is more security, more protection for women riders and when there is good service, then I will be happy to pay 5 pesos."

"The authorities announce a fare hike, that's it — they don't care about people's opinions," said Marco Antonio Torres, 42, taking a train to his office job. "I'm sure Mancera is laughing at the protests, and prices will keep going up for everything."

Mancera did in fact seem to dismiss the turnstile-jumping protest, saying it wasn't large enough to hurt the network's earnings. He promised to add police, remove vendors and make public how money from the higher fares is spent sometime next year. He has also suggested there will be discounts for needy commuters, including single mothers and the unemployed.

His government conducted a survey of 7,200 passengers over three days in November and said an average of 55.7% of people approved of the rate increase — but only if it led to real improvements in the battered underground.