The Irvine-based Transportation Corridor Agencies will use the borrowing to refinance the Foothill-Eastern system. 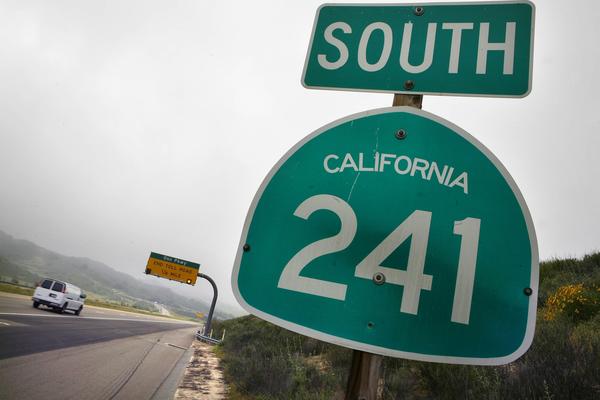 The Irvine-based Transportation Corridor Agencies will use the bond sales to refinance the Foothill-Eastern system, which includes the 133 tollway in central Orange County as well as the 241 and 261 that run from Yorba Linda to Rancho Santa Margarita.

Orange County's largest toll road network on Thursday sold $2.3 billion in bonds to shore up the finances of several highways that have failed to meet revenue and ridership projections.


The Irvine-based Transportation Corridor Agencies will use the borrowing to refinance the Foothill-Eastern system, which includes the 133 tollway in central Orange County as well as the 241 and 261 that run from Yorba Linda to Rancho Santa Margarita.

The bond issue will extend the time that motorists must pay tolls on the Foothill-Eastern's highways by 13 years —from 2040 to 2053 — and add upward of $1.75 billion to the corridor's total interest payments by the time the bonds mature in 2053.

Ridership and revenue for the toll roads have fallen substantially below forecasts at a time when the agency's debt payments have been rising.

A study released in July by the California state treasurer's office indicated that the Foothill-Eastern corridor would be at risk of defaulting on its bonds, issued in 1999, if the operation wasn't refinanced to lower the agency's annual debt service.

Tollway officials said the refinancing at lower interest will protect the agency's credit rating, reduce the pressure to increase tolls and lower the annual growth in debt payments. The interest rate offered on the bonds averaged 6.06%.

Cash flow also could improve, providing money for road projects and to retire some of the debt early to reduce interest payments as recommended in the treasurer's report. Overall, TCA officials say the total debt payments between now and 2040 will be reduced by $975 million.

"The restructuring brings the agency's debt in line with current revenue projections and strengthens our financial outlook," said Amy Potter, the chief financial officer for the TCA, which also operates the San Joaquin Hills toll road in western Orange County.

Two rating agencies, Fitch and Standard & Poor's, gave the corridor bonds the lowest investment grade, except for $206 million in notes that have received a speculative or junk rating.

Standard & Poor's said the agency has good liquidity and that its willingness to raise tolls is a positive credit factor. The refinancing also will reduce annual debt payments, ratings analysts said.

Moody's gave the bonds a speculative rating, which reflects a substantial credit risk because of the agency's high debt load and long period of underperformance. The firm noted that there has been some improvement in ridership and revenue.

From July through November, corridor officials say that traffic and revenue on the Foothill-Eastern system have increased 2% and 7%, respectively, compared with the same period last year.

Environmentalists and other opponents of a corridor agency proposal to extend the 241 through south Orange County to Interstate 5 have been concerned about the refinancing. They contend it will provide money to build the controversial project, which they fear will degrade popular San Onofre State Beach Park.