After the light-rail line opened, Angelenos who lived within half-mile of a station tripled their rail ridership, USC study finds. 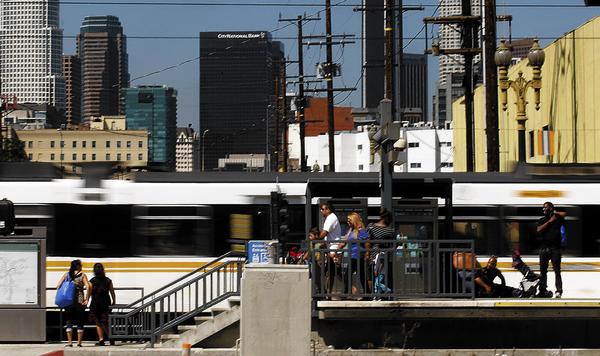 Metro Blue Line cars zip past a station near Washington Boulevard and Flower Street, where the Blue Line converges with the Expo Line. After the Expo Line opened, Angelenos who lived within a half-mile of a station tripled their rail ridership and reduced their daily driving by 40%, a USC study found.


The Metro Expo Line was already under construction when Ryan Vincent started house-hunting. His goal: to live within walking distance of a light-rail station.


"Every house I looked at, I was doing the mental calculus," Vincent, 39, said. "Would I be willing to walk from that address to the train?"

For the full report and executive summary, visit http://priceschool.usc.edu/expo-line-study/

He settled with his girlfriend and his dog in a Spanish-style home in West Adams, two blocks from the Farmdale Station. Since then, his Honda Civic hybrid has mostly sat unused.

The small changes Vincent made in his daily life, including finding a doctor and a dentist with offices near a train stop, mirror the behavior of many households living near the Expo Line, according to a USC study released Monday.

After the light-rail line opened, Angelenos who lived within a half-mile of a station tripled their rail ridership and reduced their daily driving by 40%, the study found.

In fall 2011, researchers asked more than 200 households in the Exposition Corridor, the Crenshaw Corridor and Harvard Park to track their travel habits and odometer readings for seven days. The same households repeated the exercise in 2012, when the Expo Line had been open for about six months.

Households within a half-mile of an Expo Line station reduced their driving by 10 to 12 miles a day, compared with those who lived farther away, according to the data.

Researchers said they realize Los Angeles is too sprawling for everyone to live within a half-mile of a train stop, that the line is new and that residents' behaviors may yet change. But the study's findings, USC researcher Marlon Boarnet said, can help transportation officials make smart choices about rail lines and the network of roads and neighborhoods that surround them.

Los Angeles County may see as many as five new rail lines and extensions by the end of the decade. "This teaches us how to make our investments count," Boarnet said.

The Expo Line's second phase will open to the Westside in 2016. When that happens, attorney Aryan Shommetoub expects to take the train and the Big Blue Bus from his home in Baldwin Hills to a branch courthouse in Westwood.

"It's a treat to be able to take the line to work, when I can," Shommetoub said. He still often drives, but takes the section of the Expo Line that opened last year when he has meetings or court appearances near downtown.

After the Expo Line opened, households living within a half-mile of the stations saw a 30% reduction in their carbon emissions, the study said. Although some people had purchased more fuel-efficient cars, Boarnet said, researchers chalked up the difference to people driving less.

The study participants who were the least physically fit also saw a health benefit: about 8-10 more minutes of moderate or vigorous physical activity a day.

That could inform urban design as cities across the county install bike lanes and foster development around transit.

The study's findings will become most important, Boarnet said, when the Westside subway along Wilshire Boulevard breaks ground. Currently, an extension to La Cienega Boulevard is scheduled to open in 2023.

"This is very tough for people to wrap their minds around," Boarnet said. "But we're going to get to the point where the system is meaningfully large."