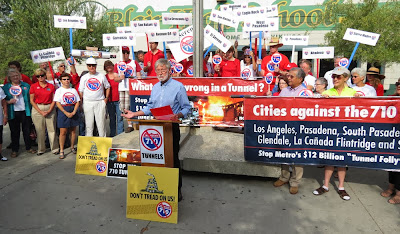 Now here is an expenditure everyone can get behind. Sierra Madre, along with South Pasadena, La Canada Flintridge, Glendale and Pasadena, have joined in a "5-Cities Alliance" to fight the 710 Tunnel. Which is a very good thing.

Should this tunnel ever actually happen, it would be environmentally devastating to our portion of the San Gabriel Valley. If built countless diesel trucks and other unwanted traffic out of the ports of Los Angeles and Long Beach will be funneled up the 710 Corridor (one of the most ecologically devastated in the U.S.) and straight out onto the already distressed 210, befouling our air with cancer and asthma causing pollutants while also causing traffic here to grind to a halt.

All so that the producers of cheap goods imported from low wage overseas labor markets can save a little money and get their goods inland to Wal*Mart more quickly.

Paradoxically, Congresswoman Judy Chu and Assemblyman Chris "Cheap Houses" Holden both support this tunnel. Which I have to assume means that the prospect of lining the pockets of their corrupt lobbyist patrons with plenteous amounts of overseas vigorish means more to them than the health and welfare of their own constituents.

But who in government actually works for the people anymore? Certainly not that unhappy pair. Each of them sold us out in a heartbeat.

In a 5-0 vote, members elected to join the “5-Cities Alliance,” comprising South Pasadena, La Canada Flintridge, Glendale, Pasadena and Sierra Madre. All five cities oppose extending the 710 Freeway, which has been debated for decades.

“Financially, you know people are willing to put up money, and that really makes us really confident,” she said. “And I think it sends a strong message to Metro and the politicians on the board looking at this issue. We are serious and basically we are going to put our money where our words are.”

Together they have $250,000 to spend on studies that they hope will support their stance against connecting the SR-710 freeway.

The California Department of Transportation and Los Angeles Metropolitan Transportation Authority are working together to publish a draft environmental impact report by spring 2014. The five options are “no build,” traffic management solutions, light rail, bus rapid transit and freeway tunnel.

The Alliance would allow participating cities to save money and share information related to SR-710 North studies. It is meant to eliminate expensive, patchwork consultant work.

Every city that agrees to the Memoradum of Understanding (MOU) will contribute $50,000. South Pasadena will be responsible for the safekeeping and management of the quarter million dollars.

Once the proposals come back, the Alliance members will evaluate the contenders and decide to whom to award the contract.

Councilwoman Diana Mahmud called the agreement “a tremendous step forward for our city and for the effort to fight Metro on its proposed construction of the tunnel.”

I think this is great news. If we can't get our so-called representatives in Sacramento and Washington DC to work on our behalf, then we'll just have to do it ourselves. Get behind this.

I Need A Christmas Present From You Guys

The people from the United Against 710 group have worked hard and long to help protect our little slice of paradise against what Metro, Caltrans and the likes of Cheap Houses Holden have planned for us. Which is basically mainlining environmental devastation right through the heart of the San Gabriel Valley.

And what are the UA710 people asking in exchange for the hundreds of hours of hard work they have put into fighting a government that believes it no longer has to answer to the likes of us? Your name on a petition. It is the best deal you will ever get.

So sign the petition. Here is how you do it:

Recruit friends, family and neighbors to sign the petition!!

2. Click on the words "Sign the Petition" that appear in the yellow oval. This will take you to a page that shows all the officials who will be contacted each time the petition is signed.

3. Click on the words "Sign the Petition" in the yellow box on this page and you will taken to the petition at Change.org.

4. Fill in the information at the right to sign the petition, and if you wish, leave your comments on why this is important to you.  You can also uncheck the box under your information to opt out of receiving more petitions from Change.org.

Sign it. Right now. Before you get busy with something else. Otherwise Santa is going to be very angry with you.