Under Seattle, a Big Object Blocks Bertha. What Is It? 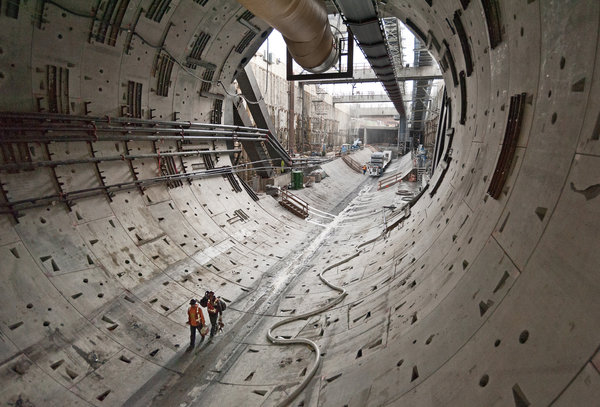 In October, workers walked through the first rings of the highway tunnel being built under Seattle’s waterfront toward the boring machine called Bertha. 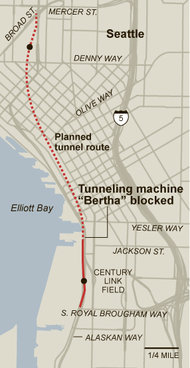 SEATTLE — A secret subterranean heart, tinged with mystery and myth, beats beneath the streets in many of the world’s great cities. Tourists seek out the catacombs of Rome, the sewers of Paris and the subway tunnels of New York. Some people believe a den of interstellar aliens lurks beneath Denver International Airport.


Now Seattle, at least for now, has joined that exclusive club.

Something unknown, engineers say — and all the more intriguing to many residents for being unknown — has blocked the progress of the biggest-diameter tunnel-boring machine in use on the planet, a high-tech, largely automated wonder called Bertha. At five stories high with a crew of 20, the cigar-shaped behemoth was grinding away underground on a two-mile-long, $3.1 billion highway tunnel under the city’s waterfront on Dec. 6 when it encountered something in its path that managers still simply refer to as “the object.”

The object’s composition and provenance remain unknown almost two weeks after first contact because in a state-of-the-art tunneling machine, as it turns out, you can’t exactly poke your head out the window and look.

“What we’re focusing on now is creating conditions that will allow us to enter the chamber behind the cutter head and see what the situation is,” Chris Dixon, the project manager at Seattle Tunnel Partners, the construction contractor, said in an interview this week. Mr. Dixon said he felt pretty confident that the blockage will turn out to be nothing more or less romantic than a giant boulder, perhaps left over from the Ice Age glaciers that scoured and crushed this corner of the continent 17,000 years ago.

But the unknown is a tantalizing subject. Some residents said they believe, or want to believe, that a piece of old Seattle, buried in the pell-mell rush of city-building in the 1800s, when a mucky waterfront wetland was filled in to make room for commerce, could be Bertha’s big trouble. That theory is bolstered by the fact that the blocked tunnel section is also in the shallowest portion of the route, with the top of the machine only around 45 feet below street grade.

“I’m going to believe it’s a piece of Seattle history until proven otherwise,” said Ann Ferguson, the curator of the Seattle Collection at the Seattle Public Library, who said she held out hope for something of 1890s Klondike Gold Rush vintage, when Seattle became the crazed and booming gateway city to the gold fields of Alaska and Canada.

At the downtown storefront museum for the tunnel project, called Milepost 31, visitors are cracking Jimmy Hoffa jokes or spouting theories about buried train engines. Gabe Martin, a sales clerk at a curio shop near the dig site, said he was intrigued by the Prohibition era, when Seattle rode a tide of illegal alcohol smuggled from Canada, and people had reason to bury things, not wanting them found. “Bootlegger stuff,” he said.

Mr. Dixon said that efforts to drain water and reduce pressure at the drill head, with a series of bore holes pushed down in recent days, could allow workers to get safe access to the blocked site as early as Friday. But working at atmospheric pressures similar to what a diver would experience, the team could stay down only for short periods, he said, and each visitor would then need time in a decompression chamber.

And there is something of a John Henry’s hammer theme to the tale of Seattle’s object. Bertha is blind as a mole in front, with no forward-facing windows or cameras, so a kind of spacewalk through air-locked doors is required to get to the front of the machine for inspection. And the removal or breaking up of the object is likely to be done with jackhammers or other old-fashioned tools that a tunnel-digging sandhog worker of generations past would recognize.

If the object can’t be broken up below ground, there would need to be excavation down from the street. In any event, Mr. Dixon and other state managers said, the machine’s forward progress could be halted for weeks — though they stressed that work is continuing on the ends of the tunnel, and that it is too early to talk about cost overruns or delays. The tunnel is scheduled to be open to traffic by late 2015.

The tunnel is to run north and south along Elliott Bay from Century Link Field, home of football’s Seahawks, to a point near the Space Needle on the north, allowing demolition of an elevated roadway and improved crosstown foot and bicycle access.

Economics and geology — two key threads of Seattle’s creation — underpin the tunnel’s impetus. Planning for the project began after an earthquake in 2001 revealed seismic vulnerability in the elevated viaduct roadway, which was built in the 1950s. Businesses and real estate interests were then sold on the idea that a tunnel, replacing the viaduct, would open access between downtown and the waterfront.

But unlike, say, Boston or New York, where tunnels are common and bedrock is close to the surface, getting to that end point is messy. Seattle’s underbelly is more like pudding than soil — a slurry of sand, gravel and clay, all jumbled and compressed by the pressures from a 3,000-foot-thick ice sheet that extended as far as Olympia, 50 miles south. A city famous for being wet also has a high water table, only about four to five feet down.

And because Seattle, as first encountered by European-American settlers, was hardly conducive to being a city at all, with steep, glacier-carved hills rolling right down to the water, the landscape was reshaped from the beginning, with projects to grind down the hills. That in turn created lots of landfill, which went into the waterfront to level it and create land on which the city’s commercial center rose.

“It’s mind-boggling how much we have altered the landscape of Seattle,” said David B. Williams, a geologist and author of a coming book about the making of Seattle’s landscape, called “Too High and Too Steep, Reshaping Seattle’s Topography.”

“The tunnel is just a continuation of that story,” he said as he walked north of downtown, where a cliff face showed the layered strata of the geologic past.

Mr. Williams, who blogs about local geology, speculated in a recent post that the remains of a famous shipwreck, the Windward — which foundered in 1875 and was buried near the waterfront — might be the kind of object that Bertha encountered, though he conceded that the machine could probably grind through a wood vessel as though it were paper.

In the end, he said, state engineers are probably right. A rock, huge in size or in a configuration that the machine cannot quite get purchase on to grind, is the most likely culprit. “I do hope it is not,” he said. “It would be great to find some new mystery.”