710 Cartoon Appearing in the Pasadena Sun 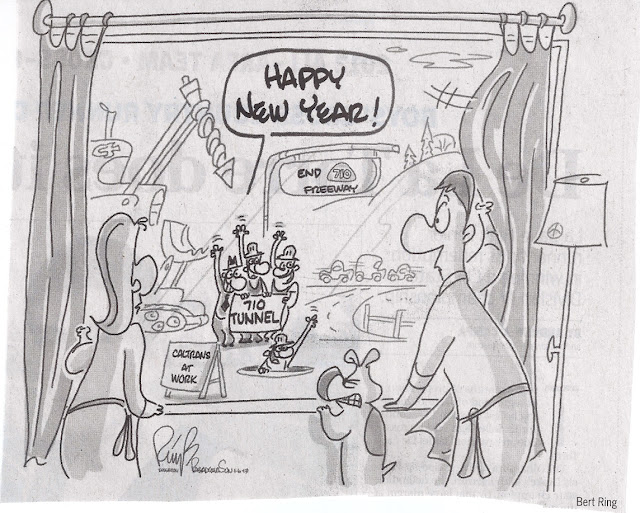 Trucks Will Roll Down an E-Highway In California Test

after a question asked (about 15:40 into the video), Doug Fielding, Metro's Executive Director, Highway Programs, bragged about Southern California being the only area in the country that is investigating zero-emission technology for  trucks. One of these technologies is the Siemens' eHighway Catenary Concept, which will be tested in California in the near or farther-away future. Mr. Fielding didn't answer the woman's question, but, instead, referred to the zero-emission studies. However, solving the truck pollution problem is far in the future, so he was skirting the question about truck pollution today and in the near future.

It will cost truck owners considerable money to change over the zero-emission vehicles. The studies Mr. Fielding was referring to deal mainly with the 710 Corridor. If the Siemens' eHighway is adopted as the way to go or if a simpler system of battery chargers along the freeways (see "Technologies, Challenges & Opportunities I-710 Zero-Emission Freight Corridor Vehicle Systems," http://www.metro.net/projects_studies/zero_emission/images/CALSTART_I-710_TCO_Report.pdf ), do you think that truck owners will convert to zero-emission vehicles if a system is in place only on the 710 Corridor? That would be hard to believe.

Which brings up the point: To what extent is the 710 Tunnel to be part of either the Siemens' e-Highway or another zero-emission system to encourage truck owners to convert to zero-emission vehicles, a system that they can use from the ports on the 710 Corridor, to the 210 North, State Route 14, the High Desert Corridor, to the SR-18? Is this why the tunnel really will be built?]

Trucks during testing in Germany

Los Angeles-area officials are betting that one route to cleaner air in the smog-choked region might be a so-called e-highway for commercial trucks.

Within the next few years they plan to test a trolley-like system developed by Siemens AG SIE.XE +0.08% that relies on overhead electric wires to power specially equipped freight trucks down roadways. The technology is viewed as a way to reduce noxious vehicle emissions around the congested Los Angeles and Long Beach seaports, where cargo transport contributes to a good portion of the smog.

"We have the worst air pollution in the nation," says Sam Atwood, a spokesman for the South Coast Air Quality Management District, which is responsible for controlling smog in portions of a four-county region and is coordinating the effort with support from both ports and various local governments. The technology could be "an integral and essential part to our clean-air plan," he says.

Siemens's system involves outfitting new or existing diesel-electric hybrid trucks with high-tech rooftop gizmos and software that enable them to attach automatically to overhead electric wires that will power the vehicles for the distance they are in place. Siemens has been testing the technology at a former airstrip in Germany and says drivers retain full control to speed up, slow down, steer, and detach from the wires and switch back to diesel power.

That flexibility, if it lives up to its billing, means the wires simply could be strung over certain lanes of existing roadways without having to be off-limits to cars or non-equipped trucks.

Potentially, "it could be integrated into existing infrastructure" relatively quickly, says Heather Tomley, assistant director of environmental planning at the Port of Long Beach.

Some truckers are dubious. "It requires, of course, pretty dramatic changes to the [truck] fleet," says Randy Mullett, vice president of government relations and public affairs for Michigan-based freight-hauler Con-way Inc., CNW +0.31% which has substantial operations in California. For trucking companies, "it's not as easy as just putting a wire up."

Mr. Mullett says he considers the technology worth exploring, but he has yet to see estimates on what it might cost to outfit a truck. He also notes that pure diesel-powered trucks won't able to use the system since they can't run on electric power.

Sven Hackmann, a representative for Siemens, says the German company views the pending Los Angeles-area test as something of a "living lab" that among other things will help determine commercial pricing.

Siemens, with the support of California’s South Coast Air Quality Management District and development partners including Daimer-Mercedes, is proposing a new type of heavy duty hybrid based on a very old concept — electricity from overhead catenary wires.

Siemens (HTUF 2012 Booth 109) calls the concept eHighway, and says it’s “a cost-effective alternative to the use of fossil fuels in freight transport on the road.”

The idea is to outfit trucks with a hybrid drivetrain, likely a series drive, and power them with electricity from overhead lines along high-traffic highways in the population-dense areas adjacent to major ports. When the trucks reach the end of the overhead lines, they switch to fossil fuel to complete their delivery or transfer missions.

The concept is also known as Zetech, for Zero Emission Truck and Electric Catenary Highway. The Santa Monica-based Gladstein, Neandross & Associates consultancy recently completed a Zetech analysis for SCAQMD, and concluded, “Catenary-powered hybrid trucks with internal combustion engines can simultaneously address emissions and fuel economy issues while providing operational flexibility at a similar or lower cost of ownership as other zero-emission technologies.”

Both Calstart and GNA focused on the I-710 corridor leading from the Ports of Long Beach and Los Angeles.

Calstart said it sees 2035 as the “horizon year” for implementation: “The commercialization process for a complex product like a Class 8 truck includes significant engineering and development work, including demonstration and validation of early prototypes, building a small number of pre-production vehicles, and constructing a business case for moving to full production over the course of several years,” Calstart says. “It is not advisable to jump directly to the desired outcome because competing technologies must be evaluated, tested, proven, and commercialized.”