Hollywood Director Danny Boyle told Jon Stewart that making the opening ceremonies for the London Olympic games was so tedious, he had to take an eight-week break to do something creative. He made his just-released movie, "Trance. "

"You spend most of your time at those meetings figuring out what the acronyms mean," he said.
Covering the environment often feels the same way.

I'm in favor of revamping CEQA (California Environmental Quality Act), not because it slows down development, but because it makes everything it touches turn to excruciating boredom. Also, putting every project through the CEQA meat grinder produces the same kind of unrecognizable sausage for public consumption.

That's the CEQA description and pretty much how it was presented to the public at Bassett Community Park Wednesday night.

The presenters were all about significant environmental impacts, program EIRs and other CEQA-ese for a project that is about parks and bicycle riding! Yet, because of the language applied to the documentation and presentation, it came out sounding like every other proposed shopping center, landfill or high-density housing project. With predictable reactions from a conditioned public: No!
Mary Ramos of La Puente, sitting next to me, said she was concerned the project would create more traffic. I said, these are bike lanes. Maybe more bike traffic! Is that bad?

While some yelled out because they are opposed to a $22 million water museum euphemistically called The Discovery Center where the Whittier Narrows Nature Center now stands, they were told that project was not part of the 16 trails and parks being proposed as part of the Emerald Necklace plan.

So, again, how can people be against connecting bike lanes to river trails? Or adding a small park near the San Gabriel River? Or extending the San Jose Creek bike path from its present course of 2 miles that dead-ends at Workman Mill Road, over the San Gabriel River and onto that river's famous bike trail?

In other words, are people really against bike trails and walking trails and parks? Or are people conditioned to being against everything in CEQA, because CEQA talk sounds like a four-letter word. I believe it is the latter.

As my mother would say, it's not what you say, it's the tone of your voice.

CEQA has been used by opposition groups to stop a project. It's not a neutral term anymore. So, when the language comes into play, even for something simple as more bike paths, people automatically think they don't want it.

With the Emerald Necklace projects, this may be the first time in 32 years of journalism I can recall a full EIR process for such benevolent projects. Usually, a CEQA hearing is about a freeway widening or a toxic waste facility; projects people don't want. With this, when the hearing was done under the four-letter word CEQA, it elicited for some a five-letter word respose: NIMBY (Not In My Back Yard). Even if the project is literally in some cases a bed of roses.

I am a bicycle rider and I couldn't make out what the text under each project was saying! When I asked about how an underpass at Rosemead Boulevard would hook up with Temple City's planned bikeway down Rosemead currently under construction, the committee member didn't know. "It is so complicated," she said.

If presented in common language, projects would be more understood.

These projects are really quite simple: The local conservancy wants to promote bicycle riding so people can get exercise, shed pounds and avoid diabetes. So people can enjoy a rejuvenated river with birds and a hint of greenery.

So our grandchildren can run through grass instead of concrete. So we can breathe cleaner air.

Do me a favor. Don't put that in the CEQA grinder.

Four pedicab companies look set to get permission to peddle their wares in Santa Monica if the city council approves a proposed ordinance next week. The ordinance would bar the bike-powered taxis from the bike path and require them to have headlights, break lights, and turn signals that would be checked at annual inspections. Pedicabs would also be required to stick to routes listed on their permit applications. Advocates of the pedicab plan say their leisurely pace will be a boon for tourists in addition to providing a green transportation option, though at least two councilmembers are worried the cabs will clog the streets, worsening traffic. The Santa Monica Lookout reports that four operators have applied for permits, it's unclear how many cabs each business intends to put on the street (the application doesn't ask). Under the ordinance, each operator would be charged an annual fee of $195, plus an initial $112 permit fee per pedicab, to be renewed for $54 each year. Pedicabs are currently banned from the streets of LA, though that may be changing too with a potential pilot program in Hollywood.

Lack of ‘arrangements’ keeps giant tunnel machine in the bay

The ship carrying Bertha, the $80 million boring machine for the Highway 99 tunnel, will remain anchored in Elliott Bay, unable to dock as planned at Terminal 46.

A news release from the state Department of Transportation Friday morning doesn’t explain why, except that ”arrangements are still being made to unload the ship.”  The parties have had three years to prepare, since the Seattle Tunnel Partners team led by Dragados USA and Tutor-Perini won the $1.4 billion contract for the two-mile tunnel from Sodo to South Lake Union.

The state DOT initially hoped to dock the M/V Fairpartner on Wednesday, then estimated Friday.
Linea Laird, program administrator for state DOT, said in an interview Friday she is hoping to resolve the problem within a few days. ”The contractor is working on these arrangements, with labor. It does take some time to sort through the issues,” Laird said.

Unloading is expected to require nine workdays, but the vessel must yield to Port of Seattle container ships, so the task will be spread over two weeks or more.  It is a delicate operation that includes lowering pieces of nearly 900 tons onto flatbed trucks with up to 768 tires, just to travel a quarter mile or so from the waterfront to a pit where the Japanese-built machine will be reassembled this spring. The job requires a coalition of tunnel-machine engineers, skilled truck operators, and longshoremen to work as a team.

Below is the short news release, issued this morning:


Statement by Linea Laird, Alaskan Way Viaduct Replacement Program administrator:
The ship carrying the State Route 99 tunnel boring machine, the Jumbo Fairpartner, was scheduled to berth at Terminal 46 this morning to begin unloading. Arrangements are still being made to unload the ship.
The machine will not be unloaded today and will remain on board the ship, anchored in Elliott Bay, until arrangements are in place.
Seattle Tunnel Partners is under contract with WSDOT to complete the SR 99 tunnel by December 2015. This includes building, transporting, operating and maintaining the tunnel boring machine.
Additional information and comments, including the schedule for unloading the ship, will be provided once arrangements are made.

Public can attend and observe.  More information to follow.
Where to Park Your Bicycle When You Take the Metro? Updated.

The latest push to get you out of your car is for you to ride your bike to the Metro and then take public transportation to your destination. I've been wondering where you would park your bike if you didn't want to have to take it along with you on the light rail or train. This photo is of the first bike storage structure that I have so far seen at a Metro station--on the Gold Line at the Indiana station: 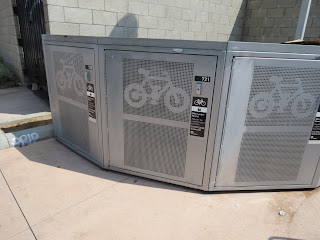 A bike locker rental, though I don't know how you would use it. It looks like you need to get the key for it. Gold Line stations aren't usually staffed with actual Metro people that you can ask questions of. They are more of a figure-it-out-yourself thing. (See update below.) 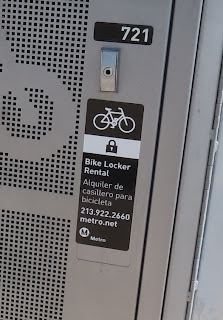 Anyway, it does seem to be an improvement over the bike parking lot in Venice, Italy, used before taking a vaporetto: All photos by Peggy Drouet.

Determine if a locker is available at your preferred Metro station; if locker is available, fill out a bicycle locker agreement; then send agreement and a check for $75.00 and your locker assignment and key will be sent to you. The Italian way to park your bike to go on public transportation appears to be both free and with less hassle, that is, if you can find your bike again.