(Peggy Drouet: Probably going to need sobriety checks before motorists are allowed to drive through a 4.5-mile-long 710 tunnel!--that is, along with checks for explosive cargo. These needed checks are going to make traveling via the streets a quicker option.)

Arrests for intoxicated driving during the first day of a county-wide summer crackdown were down 13 percent Friday compared with last year, authorities said.

One of those arrested Friday was suspected of gross vehicular manslaughter while intoxicated, and four were accused of being involved in injury crashed while under the influence of alcohol or drugs, Brewer said.

Officials kicked off their summer DUI crackdown Friday. Taskforce members are planning to continue the campaign with sobriety checkpoints and extra patrols to hunt for DUI drivers through Labor Day, Sept. 2. 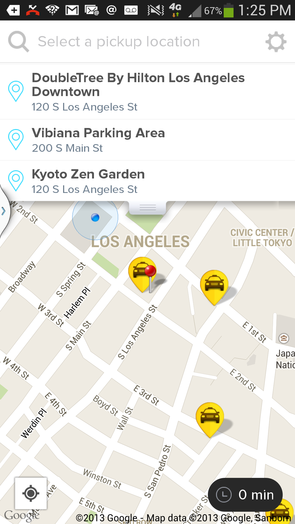 A screenshot of the Flywheel, available for Android and Apple devices. Users of the app can "e-hail" a taxi throughout the Los Angeles region and pay the fare without needing to take out a wallet.


Fighting back against the growing popularity of smartphone-based ride-sharing services, one traditional taxi company in Los Angeles has rolled out an app that makes it easy to summon and pay for a ride.

The app, developed by Flywheel Software Inc., a San Francisco startup, has enabled about 300 of the region’s 2,300 official taxis to pick up passengers who request a taxi ride using an Android or Apple mobile device.


The Los Angeles taxi industry has labeled ride-sharing apps such Lyft and Uber as “bandit” cabs. Those services let individuals act like cab drivers without the same licensing requirements faced by traditional operators. Flywheel now gives the old-school taxis a tool to appear just as hip as the high-tech pick-up companies.

Humphreys says most users should a have a cab at their doorstep within five to seven minutes. Other companies such as Hailo, Verifone and iTaxi provided similar services, but Flywheel appears to be the first company to launch in Los Angeles at this scale.

“There’s not as much of a cab culture in Los Angeles,” Humphreys said. “We think there’s an opportunity to get more people to ride them by being able to just load an app to find them.”
After downloading the app from the Apple or Google Play stores, a user signs up and gives their email, name and phone number to create an account. First time users can use the promo code FLYLA10 for $10 in credit.

Once logged on, users can turn on Wi-Fi or GPS to let the app determine their location. That loads a map that lists places such as restaurants and hotels and displays icons denoting the location of the cabs. The listing is provided by the location-sharing service Foursquare. If the automated locator is incorrect, users can manually move a red pin to the correct address for their waiting location.

The user clicks on the correct address, chooses a payment method and can leave a note for the driver with any special instructions. The payment method must be a credit card, and a user can add as many credit cards as they wish. To save time entering 16 digits, the app can take a picture of the credit card. Just match up the edges of the card to the green lines in the “scan card” feature.

Once everything is set, the user clicks “Request Taxi.” That sends a message to the closest Bell Cab taxi that is outfitted with an HTC Evo smartphone with Flywheel. The driver can accept or deny the request. If it’s denied, it goes to the next closest driver. Once accepted, the user can track the taxi on the map and get a constant update on the estimated time of arrival.

The driver can call the rider when he or she has arrived. The user is told the cab number to look for, and the driver is instructed to ask for the person’s name to make sure they match up. At night in crowded places, there’s a feature in the Flywheel that turns a user’s smartphone camera light into a flashing beacon to help drivers spot the correct rider.

At the end of the ride, the driver enters the fare into the app on the HTC device. Flywheel adds a $1 service fee to the fare. The tip can be preset, but changed later.

The service can be used without having to sign anything. The app will display the final fare and a receipt will be automatically emailed. Stripe is used to process the payment. If the charges ever appear incorrect, Humphreys said users can contact Flywheel and have the charge immediately reversed while the issue is investigated.

About 300 drivers have been trained to use the app, and Humphreys said 100 more should be ready to go by the end of next week. With each cab picking up about 20 riders per day, he said there’s significant capacity.

Flywheel said it chose to partner with Bell Cab because it had the highest customer satisfaction ratings in the area. More taxi providers will be added as demand arises. In San Francisco, for example, Flywheel has quickly expanded from 160 cabs to 900 of the 1,490 cabs in the city.

Each driver has their own PIN to log into the app. That allows riders to rate each individual driver. About 95% of the ratings in other cities have been either four or five stars. Payments to drivers are made via direct deposit within 12 to 24 hours.

Humphreys said coming to Los Angeles gives Flywheel a chance to expose the service to a less tech-savvy community and the increasingly growing Latino market.

“L.A. is going to be one of those surprises,” he said.

While local regulators have cracked down on startups such as Lyft and Uber, discussions at the state-level could lead to rules specifically for those kinds of ride-sharing companies.
Los Angeles Mayor Eric Garcetti recently said he looked forward to bringing similar innovation to traditional cabs. Humphreys said he met with Garcetti two weeks ago and that the mayor downloaded the app.

“The L.A. Department of Transportation has been very supportive and the mayor loves new technology,” Humphreys said. The department declined comment and said it has no involvement.
A Bell Cab representative was not available to comment.

The bullet train, an L.A. subway extension and helicopter noise reduction hang in the balance when the House and Senate return from their summer recess. 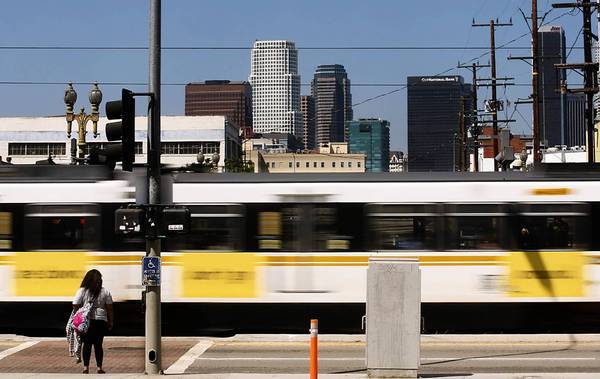 WASHINGTON — Sure, the budget battles could shut down the federal government. But they also could have consequences for an extension of L.A.'s subway, California's bullet train and efforts to reduce helicopter noise.

Those are among the lower-profile but still vital issues at stake in Congress' spending fight.
Los Angeles could find itself short of the federal funds it has sought for an eagerly awaited subway extension to the city's Westside and construction of a downtown tunnel to link rail lines.

President Obama included $65 million in his proposed budget for each of the projects. But House Republicans, in their drive to reduce Washington's red ink, provided no money for the efforts in a proposed transportation spending bill.

The proposed Senate bill would provide funds for the projects. But the House and Senate bills stalled before lawmakers broke for their summer recess amid fighting over the overall level of spending in the bills, leaving the fate of the projects up in the air.

Los Angeles officials are hoping that a stopgap spending bill that Congress must approve in September to avert a government shutdown Oct. 1 will include funding for the projects.
But in today's political climate, there are no sure bets in Washington. Last year, Obama included money in his proposed budget for the projects, but Congress, engaged in a similar budget fight, provided nothing.

"I think we're positively positioned to secure new starts funding this year, despite congressional difficulties in adopting a stand-alone 2014 transportation appropriations bill," said Raffi Hamparian, the agency's director of federal affairs. "Both projects are well positioned to secure funding in a scenario under which a continuing [funding] resolution is adopted."

The Los Angeles projects are located in a heavily Democratic city, miles away from a Republican congressman's district. That makes it difficult for Los Angeles officials to find a GOP lawmaker to champion the projects.

Still, L.A. officials have strong allies in the Democratic-run Senate. Sen. Dianne Feinstein (D-Calif.) is a senior member of the Senate Appropriations Committee.

Perhaps more important, another big project with its funding at stake is in Washington state, home of Sen. Patty Murray, the Democratic chairwoman of the Senate transportation appropriations subcommittee who will play a critical role in writing any transportation spending bill.

L.A. officials are relying on Uncle Sam to fund about half of the $2.8-billion first segment of the subway extension, taking it from Wilshire Boulevard and Western Avenue to Wilshire and La Cienega Boulevard. Federal funding also is being sought for about half of the nearly $1.4-billion downtown tunnel to link the Gold Line from Pasadena and East L.A. to the Blue Line from Long Beach and the Expo Line from Culver City.

House Republicans proposed spending about $1.8 billion nationwide for new transit projects but sought to limit the spending to projects that have received federal approval. Los Angeles officials hope the Federal Transit Administration will sign a formal funding commitment for the downtown rail connector in November and for the subway extension in February. But even if the administration signs the funding commitment, Congress must vote to appropriate funds.

MTA officials say that if the agency receives a federal commitment to fund the projects, it could still move ahead — even without a full federal appropriation in the coming fiscal year. The authority would use the nearly $1 billion it expects to borrow under a recently expanded federal loan program. If federal officials fail to sign the commitment, the projects would probably be delayed, the spokesman said.

The budget battle also could thwart a Feinstein effort to turn up the pressure on the Federal Aviation Administration to reduce helicopter noise over L.A.

An FAA study recently recommended a voluntary approach rather than government regulation to reduce the noise, citing the complexity of the region's airspace and high volume of aircraft.

Feinstein included in the Senate's proposed transportation bill language that would direct the FAA to explore measures, such as adjusting helicopter routes. The bill also would require the agency to draw up rules to address the noise unless it can show that voluntary efforts are working.

But if Congress fails to pass a separate transportation bill, her effort will probably stall.

The House transportation funding bill, meanwhile, includes a Republican-drafted amendment that the California High-Speed Rail Authority said would effectively kill the $68-billion project. The measure would require the federal Surface Transportation Board to consider the project in its entirety rather than in segments.

Dan Richard, the authority's chairman, said in a recent interview that although the authority is prepared to seek the approval of the board for segments of the rail project, the amendment is "very clearly constructed with one purpose: to stop the high-speed rail project in its entirety. Period."
Richard said the authority, which has received about $3.3 billion in federal funding, had no plans to seek additional federal dollars for next year. But he said a separate provision of the bill that would prohibit federal funding next year for the rail line would hurt the authority's ability to raise private funds for the project.

"This is the wrong time to be saying, 'We want to send a message to everybody that we don't support high-speed rail,'" he said. "If that stayed in there, it would simply slow our efforts to expand the funding base to include the private sector."
Newer Posts Older Posts Home
Subscribe to: Posts (Atom)