Sometime last year, a new pedestrian bridge was unveiled in Lujiazui in the Pudong district of Shanghai. This large scale circular pedestrian overpass enables pedestrians to avoid traffic at the round-about terminus of Lujiazui Rd. The bridge provides access to the Oriental Pearl Tower connecting financiers to leisure areas such as shopping malls and cafes, a transit station and office buildings. The bridge sits almost 20 feet above the street, with numerous escalator stairway entrances and exits. The very contemporary design and long spans between columns provides a pleasant street level experience. Visitors enjoy the walkway for its privileged views of the city as well as its introduction of clean and easy foot transportation. At night the structure is illuminated to great dramatic effect.

The walkaway is 5.5 meter high and can fit 15 people walking side by side. Since it’s opening, it has become quite a tourist attraction. 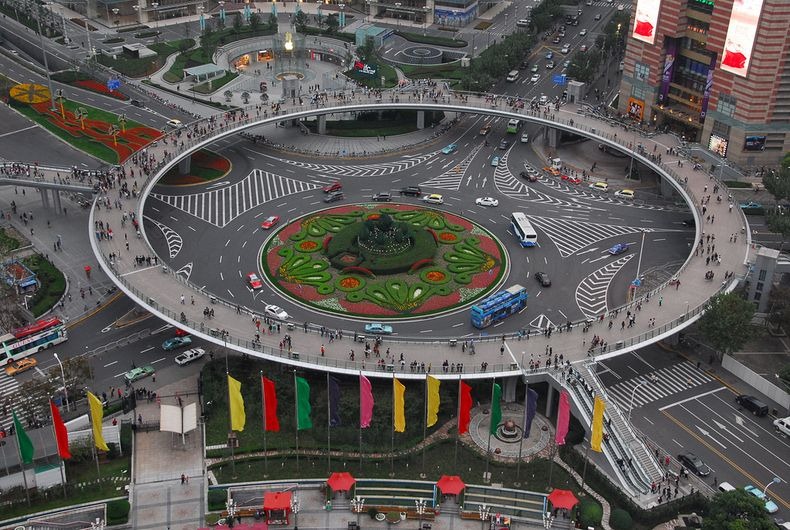 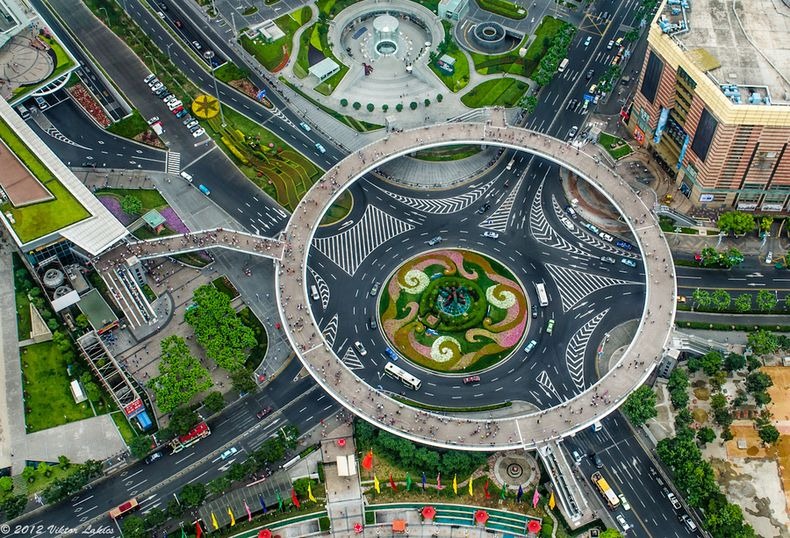 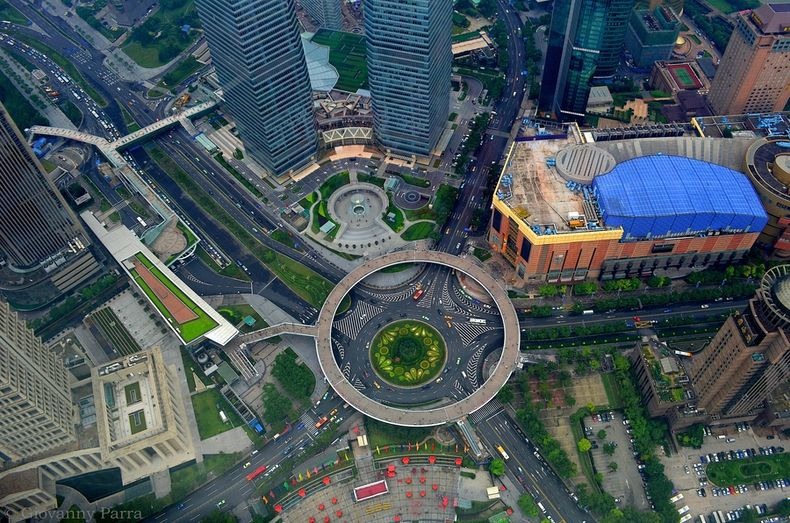 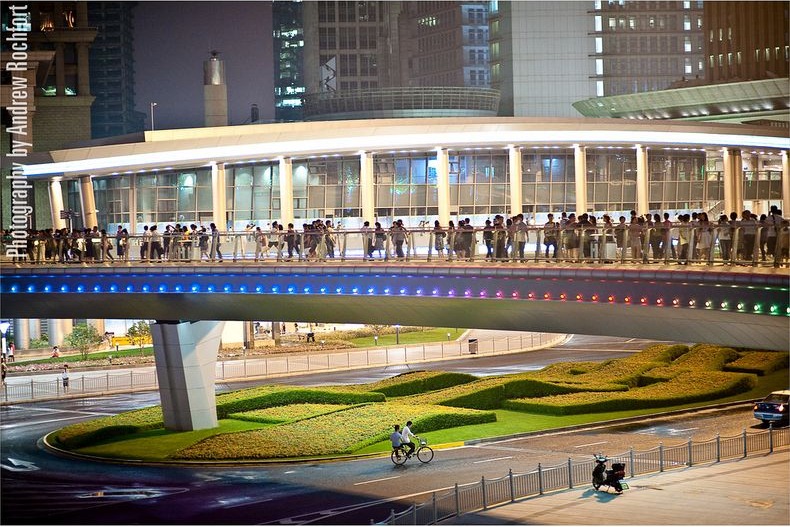 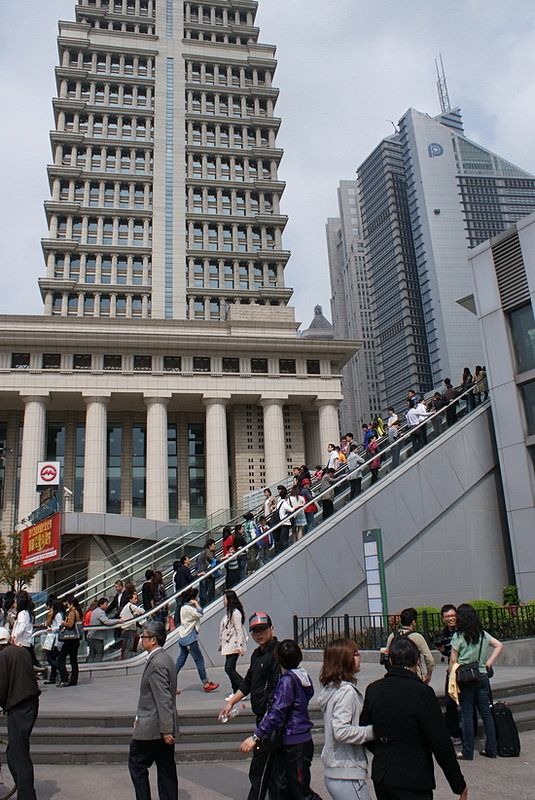 50+ years on, Willits, Calif., is getting its bypass. But with wetlands to be drained for the project, opposition has arisen. 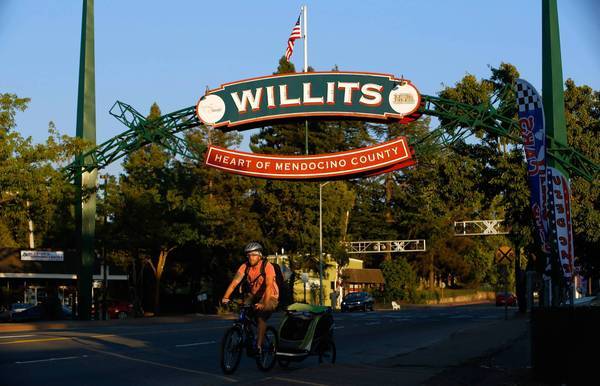 A bicycle rider makes his way on Main Street -- US Highway 101 -- through the town of Willits, in Mendocino County, where a four-lane freeway bypass is being built, requiring wetlands drainage.

WILLITS, Calif. — The project was proudly unveiled in this Mendocino County lumber town in the mid-1950s, when the car was king and the future looked bright.


Instead of channeling Highway 101 traffic right down Main Street, a four-lane bypass dubbed the Willits Freeway would route vacationing motorists and commercial trucks around the community's periphery.

Then came delays, and more delays. Ukiah got its bypass in the 1960s, Cloverdale two decades later.
Now, at last, it's Willits' turn. Tens of thousands of corrugated plastic wick drains have been plunged deep into the Little Lake Valley to compact its wetlands. The roadway's foundation piles are being driven.

But this is not the same Willits — or the same era.

Back-to-the-landers with visions of sustainability and an aversion to greenhouse gases have flocked here as the Willits born-and-bred have moved on. Only one small lumber mill remains, and the town's population has dwindled.

Opponents have decried the environmental destruction, contending that a two-lane bypass would have been far less damaging and should have been considered. They have conducted studies that indicate the project's traffic-carrying capabilities far exceed expected volumes, and last year filed a federal suit citing violations of the Clean Water Act and National Environmental Policy Act — laws not even conceived of in the 1950s.

Desperate to slow the project that broke ground in February, conservationists have teamed with more radical activists from the Little Lake Valley Defenders and Redwood Nation Earth First!, who have chained themselves to the massive wick drain stitchers — the soaring steel equipment driving the drains into wet soil — and staged sit-ins up in the trees.

The project to drain the wetlands and construct the bypass is dividing this town, which tends to rank its populace of about 5,000 by the depth of their roots here: old-timers, newer old-timers, newcomers.
"It hurts to look at this," Ellen Drell, who sits on the board of the Willits Environmental Center, said as she surveyed a graded expanse of dirt that until recently was pasture dotted with ancient oaks. "It hurts because my town, where I've lived my entire adult life, wasn't willing to be part of a better solution.

"What are we, in Willits, doing in 2013?" she asked, close to tears. "We're building a four-lane freeway that's not needed, and for no reason we're sucking a wetland dry. The irrationality of it is just crushing."

Yet plenty of residents are fed up with the protests, saying the project at last will relieve Main Street's traffic jams while modernizing infrastructure for countless Californians who don't wish to stop in town at all.

"It's about inter-regional transportation. It's about the functioning of a major state highway," said Jeanne King, a retired schoolteacher and 30-year resident. "I don't consider myself a bypass proponent, I consider myself a bypass acceptor. Many people accept that the bypass is here after years and years of talk. This bypass, not some other bypass, not some better bypass."

Caltrans district spokesman Phil Frisbie said the agency followed regulations in winning approval for the project, agreeing to a massive mitigation plan to enhance nearly 2,000 acres of the watershed in exchange for compacting 60 acres.

The agency will install fencing to keep livestock out of streambeds — which will improve water quality — and replace three culverts on three streams meant to open up new spawning grounds.

"We compromised," he said.
::
With a folksy archway proclaiming itself the "Gateway to the Redwoods," Willits presents the biggest speed bump for Highway 101 traffic between Eureka and Santa Rosa. During rush hour and on holidays, particularly when music festivals are scheduled to the north, traffic can back up for miles.

"I've seen fistfights. I've seen accidents," said Denny McEntire, a former councilman who in 1945 arrived in Willits as a 6-month-old and grew up hanging around his father's soda fountain.

Since the bypass project was revived in earnest, most here agree, the message has been four lanes or nothing.

How’s your transportation system treating you these days? Hitting more potholes? Or are the roads you drive in decent shape? Is congestion getting worse? Do you have good public transit, biking, and walking options? Your answers may affect how much you pay in taxes or tolls in the future, and how California agencies spend those dollars.

Recent studies show a steady decline in the quality of our transportation networks. The typical commuter in the Los Angeles metropolitan area wastes 61 hours and 27 gallons of fuel annually while stuck in traffic, for a total “congestion cost” of $1,300, according to the Texas Transportation Institute. Bad roads add hundreds more annually to tire and vehicle repairs and other operating costs.

Such findings often prompt calls for more transportation spending. Indeed, more investment is needed. But that’s not enough. “Government agencies also must spend funds more wisely—cutting red tape to build projects faster and at lower cost, and making sure that money goes only to projects that best relieve congestion and improve safety,” says Alice Bisno, Auto Club senior vice president of public affairs. The bottom line: If taxpayers are going to pay more for transportation, they must get value for their money—better and safer roads, good public transit, and less time in bumper-to-bumper traffic.

Governor Jerry Brown has directed the secretary of the new California State Transportation Agency to convene a working group of key transportation stakeholders—including the Auto Club—to review the state’s transportation needs and recommend a funding strategy. The group is scheduled to submit its recommendations to the governor and the legislature by late 2013 for possible action in 2014.

The Auto Club has reviewed several approaches to investing more in transportation that various states are considering. Here’s a brief analysis of each one’s chances for success.

Traditionally, federal and state taxes on motor vehicle fuel have funded transportation projects. In California, motorists pay 39.5 cents a gallon in state gas taxes, 2 cents a gallon in state underground storage tank fees, plus 18.4 cents in federal gas taxes, generating more than $10 billion a year for transportation. But most gas taxes haven’t been raised for decades, and their buying power is declining because of inflation and newer cars that get better gas mileage. Each one-penny increase in the state gas tax would raise about $160 million a year, costing the average California driver just $7 annually.

A significant increase could easily generate much of the needed near-term funding.

A VMT tax is based on the number of miles driven. Collecting such a tax would require a new reporting mechanism to determine the number of miles each motorist drives. No state has yet enacted a VMT tax, although some states are investigating the concept, and Oregon is conducting pilot tests.

Yes, but complex and costly to implement; fraud and privacy issues need to be addressed; not likely to happen in the near term.

It could, if set at a high enough rate and regularly adjusted to meet fiscal needs or keep pace with inflation.

It’s becoming increasingly common to levy tolls on motorists who drive in special express lanes or on new toll roads.

Advances in electronic tolling make it easier to implement. But charging a fee to use existing regular lanes and streets—proposed by some officials—is very unpopular.

Tolls could help build new roads, lanes, and related transit services, but they won’t generate enough money to pay for the rest of the  transportation system.

The VLF (0.65 percent of a car’s value—$65 for a $10,000 car) currently raises about $2 billion a year to pay for local government services. Vehicle registration and other DMV fees raise about $2.8 billion per year (about $100 per registered vehicle) and pay for motorist services, such as the CHP and DMV.

Only if the amount of increase is very high.

California voters have a long history of approving special sales taxes to fund specific transportation projects, usually in half-cent increments at the county level. A statewide sales tax could augment or replace the gas tax. A 1 percent tax would generate more than $6 billion a year.

Popular because funds stay local and voters know how money will be used. A statewide option could be successful if it follows the same model.

It could. Current local taxes generate over $4 billion a year for roads and transit in the 19 counties that have them; revenue grows with the population, the economy, and inflation.

Bonds are like taking out a mortgage. The government borrows money to build a road or rail line and uses future tax revenue to repay the money over time. California voters approved nearly $20 billion in transportation bonds in 2006 to fund key projects that might not otherwise have been built—and created an ongoing debt for taxpayers.

Voters have to be willing to approve bonds for specific purposes.

Probably not. Bonds usually build capital projects but don’t address ongoing operations and maintenance needs. And some amount of future taxes would have to be set aside to repay the bonds.

Where It Comes From

Transportation funding is complicated. Much of the money comes from motorists and other system users, is put into different pots, and is then allocated according to complex formulas. The illustrations on these pages are a simplified snapshot of the current funding picture in California.

* Does not include one-time state bonds.

What You Pay Per Gallon in Taxes

*Includes 2-cent/gallon state underground storage tank fee.
**Most Southern California counties have a 0.5 percent local transportation sales tax program; in Los Angeles County it’s 1.5 percent.
***Price varies daily.
Craig Scott is a transportation policy specialist at the Auto Club of Southern California.
Would you pay more to fix roads and transit lines? How about for new or expanded facilities to reduce congestion and improve safety? Let us know what you think.