Long Beach is bike friendly with shared lines designated routes like the one along 2nd Street in Belmont Shore.

But it’s a civil message, here near the end of this Summer of Cycling in Southern California, as part of the conversation we’ve been having — and the region should keep having — about the best ways to integrate the growing number of bicycle riders into our transit mix.

Too often in recent years, as tension has mounted between bicyclists and motorists on our urban streets, the talk has not been in measured tones. The road rage is likely to give us all a road rash if everybody doesn’t tone down.

So everyone pull over to the curb here, and talk about where we’ve been and where we’re going.
First, drop the us vs. them posturing that has made parts of the conversation so angry. In this case there is no them, only us. Almost every motorist has at one time been on a bicycle, and if it’s been a while, well, there’s no time like the present to give it a try again for health and pleasure. Almost every cyclist also drives a car, often every day.

Yet too often the motorist hits the horn or shakes a fist — or, in those terrifying cases of car-as-weapon, hits the gas and aims at the bike — over slights perceived or real. Too often a cyclist who has gone unseen forgets how hard it can be for drivers to see her or him and raises a middle finger or voice in anger. Not good for what should be the good karma of riding.

It needn’t be that way. Yet if some current trends continue, what should be the welcome addition of a new transit mode in Southern California will not roll out smoothly.

For bicyclists, the carrot in all this should be that obeying the rules of the road, as motorists must, will surely result in a safer, longer life. There are few protections, beyond the helmet that should be worn at all times. Too many cyclist deaths and severe injuries are preventable. While some Southland cities do allow riding bikes on sidewalks, for instance, do it with caution, not at speed. But cyclists may not, as so many do, ride their bikes in crosswalks — if you want the right-of-way afforded pedestrians, you must by law dismount and walk your bike.

Sure, the temptation to roll right through that stop sign when there are no cars visible coming from any direction is a great one. But is it really such a problem to apply the brakes? Think of the good exercise you’ll get when starting up again.

If bicyclists continue to ignore laws en masse, the stick of punitive legislation is inevitable. That includes the possibility, already raised in many states in recent years, of forcing bicycle drivers to pass a test and be licensed the same way motorists are. The surface logic is undeniable: Cyclists are operating a vehicle on the roadways, so why shouldn’t they be tested on the rules of those roads?

In reality, this is a much different proposition, though one that should at least be discussed and tough questions answered. Children ride bicycles, so would there be a cut-off age? Twelve-year-olds could be licensed, but it’s no go if you’re 11? No on wants to subvert good habits of exercise and independence in our young.

Meanwhile the practice of registering or licensing bicycles themselves is being dropped by many places; Los Angeles repealed its longtime licensing law in 2009 because it was simply ignored by almost everyone, and because licenses rarely lead to the return of a stolen bike.

But for certain, what Southern California needs right now is some public education about the rules of the road — for both bikes and cars — and some enforcement when those rules are broken.

Two organizations, Transit Alternatives and the San Francisco Bicycle Coalition, have created excellent guidelines that, paid attention to, would result in safer commutes for us all, based on the simple principle “Give Respect, Get Respect,” and available at www.transalt.org/campaigns/bike/giveget and www.transalt.org/press/askta/040407working.

Bikes and cars must coexist. To do that, we need both clear rules and mutual civility. Motorists railing against cyclists’ flaunting regulations might reflect on the times that they themselves break the speed limit, take illegal turns, drive with distraction. Cyclists angry at rude drivers should ponder the fact that they can be hard to see and consequently ride defensively. Even pedestrians, who have been known to jaywalk, can do better. We can all do better.

It's getting so hard to park in L.A.'s Arts District that giant American Apparel has hired a valet service to help workers find spots. 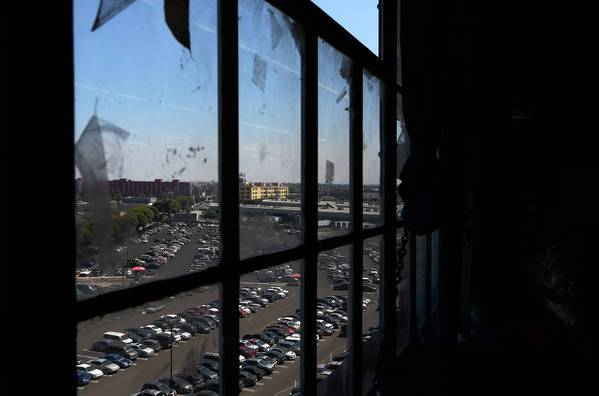 American Apparel's parking lot in the Arts district always seems to be full. As more residents and businesses move in, parking has become such a problem that the company has hired a valet service to help employees find spots.

In a sunbaked parking lot near downtown Los Angeles, a young man in a red polo shirt hopped out of a Honda sedan and jogged to the nearby valet stand, eyeing a long line of customers.

"It can get pretty hectic here," valet Elmer Nolasco said, grabbing a stack of parking stubs. "The factory workers, they come and go at the same time."

After complaints that workers were late for their shifts because there was not enough parking, American Apparel — the largest sewing facility in North America — has hired a valet company to wrangle thousands of cars at the company's vast Alameda Street headquarters.

"Logistically, this is beyond impossible," American Apparel chief of staff Tina Pellegrino said, surveying the sea of cars outside the multistory building. "The lot was full even when we were the only ones here."

American Apparel, which straddles the Industrial district and the Arts district, was once surrounded by produce marts and cold-storage facilities. But the area between downtown and the Los Angeles River has seen an influx of businesses and residents in the last five years, straining scant parking and transit options.

American Apparel's issues at Alameda Square are one dramatic example of a larger accessibility problem in the Arts District, advocates say, where little parking or infrastructure has been added to support about 2,600 people living in a traditionally industrial area.

Trucks cause traffic jams and put wear on the roads. The area has been a popular filming spot since the 1980s, and the vehicle caravan that accompanies a shoot can block a street and its parking spaces for an entire day.

The population is small enough that the Arts district's coffee shops and restaurants depend on business from outside the neighborhood. With few direct transit options, visitors drive. Once they arrive, there's not much parking.

"It's not quite close enough to anything," said real estate entrepreneur Tyler Stonebreaker. "It just isn't very accessible."

The area has a DASH stop and several Metro lines, and 1.5 miles to the north is Union Station. But no lines connect directly to the Arts district. Getting there requires a half-hour trip and a transfer in downtown Los Angeles.

A bus line once ran down Alameda, the area's backbone, to Union Station. But Metro cut the route about a decade ago because ridership was low.

Metro's downtown regional connector, due to open in 2020, will have a stop at 1st Street and Central Avenue. Residents say the neighborhood needs something closer, and sooner. Some have suggested a bus line along a north-south backbone, such as Santa Fe Avenue or Alameda.

"It contradicts the point of the program, which is to encourage business," Stonebreaker said. "Business won't do well if no one can get here."

Residents say a parking garage would be practical but wouldn't match the scale of the area's low-slung buildings. So far, they said, investors haven't seemed willing to build an underground parking structure.

Fred Muir, a spokesman for Alameda Square parent company Evoq Properties, said they are considering a parking garage to serve American Apparel and its other factories. In the interim, Muir said, American Apparel could pay for more parking spaces. American Apparel said it still wouldn't be enough.

Some businesses are proposing alternative solutions, including an Arts district tram that would circulate through Little Tokyo and downtown. In addition to valets, American Apparel provides discounted Metro cards for employees and historically has given bicycles to some if they want to ride from Union Station.

The company's distinct salmon-colored factory is often used as a symbol of American manufacturing. But it's hard to keep jobs in Los Angeles, Pellegrino said, when workers can't get there.
Newer Posts Older Posts Home
Subscribe to: Posts (Atom)