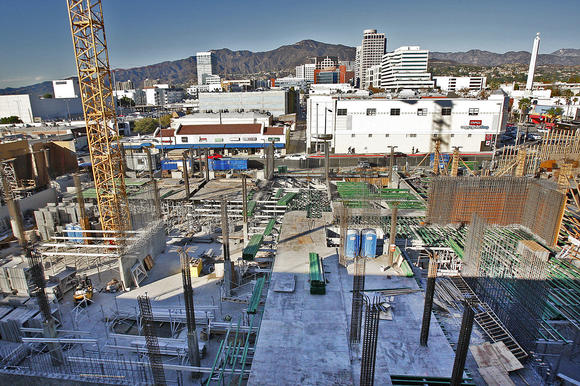 A construction project between Brand Blvd. and Orange Street in downtown Glendale where several properties are under development, many of them for apartments, on Wednesday, November 27, 2013.


Officials with the California Department of Transportation are worried that the massive development boom in Glendale may have significant impacts to nearby freeways that aren’t being addressed in environmental reviews for new projects.

The reviews tend to focus on traffic generated by an individual building, but don’t fully take into account the cumulative impact of other projects, said Elmer Alvarez, a project coordinator at Caltrans, which is responsible for highway planning, construction and maintenance.

For example, an environmental review of a 142-unit, mixed-use complex called the Link approved last month by the City Council stated that the 11,600-square-foot project wouldn’t have a significant traffic impact on the nearby Golden State (5) Freeway or Glendale (2) Freeway, but that analysis didn’t take into account the 21 other projects either recently built, under construction or in the planning stages in Glendale, Alvarez said.

Many nearby projects in the pipeline, including the $25-million Link planned for the corner of Central Avenue and San Fernando Road, don’t meet the 150-trip minimum required by state law for freeway impact analysis, according to a letter that Caltrans Branch Chief Dianna Watson sent to the city regarding the Link.

But if the projects were considered together, they may hit the threshold, Alvarez said.

There are roughly 3,800 units either constructed or in the pipeline for south Glendale, a development boom that followed a massive revamp of the city’s zoning in 2006 with the goal to move development from the city’s hillsides to downtown.

The plan was to transform a downtown blanketed with commercial properties into an area where people could live and work.

The rezoning, known as the Downtown Specific Plan, along with city impact fees that were purposefully set low to encourage development, worked, but now Caltrans officials are concerned about the potential transportation effects from future developments.

Although a handful of perennial City Hall critics have complained about traffic during the approval hearings for numerous projects, traffic concerns haven’t dominated City Council discussion.

Council debate has tended to focus on project design, with just one council member, Ara Najarian, calling to put the brakes on new development because of traffic and other quality-of-life concerns.

Alvarez forecasted that the new developments in Glendale, as well as others in the region, could strain traffic on the freeways and it could take decades for state agencies to get enough money to fix the problems.

A better scenario, he said, would have Caltrans and city officials working together to pinpoint which areas will have the most severe problems and start planning ways to pay for projects to mitigate traffic congestion — anything from ramp widening to streetlight synchronization — in advance.

Some ways to pay for the transportation projects could include government grants or new fees paid by developers, Alvarez said. Glendale already charges developers park and library impact fees and officials are considering hiking the cost of those per-unit charges — from $7,000 to $15,645 — due to the high number of developments underway.

If developers don’t pitch in, then it’s taxpayers who will be footing the bill for necessary improvements prompted by rapid development, Alvarez said.

Haghani added that in 2006, when the city paved the way for the development boom, a traffic impact study through 2030 was conducted.

That report labels portions of local streets and freeways at levels A through F, with F signifying jammed conditions.

According to the report, which doesn’t provide solutions for the increased traffic, freeway segments in the downtown area were set to operate at level D or worse in both directions during morning peak hours, 7 to 9 a.m., by 2030.

Most of the segments were forecast to operate at level F in the afternoon peak hours, 4 to 6 p.m.

The rezoning tied to the specific plan was estimated to generate a maximum of roughly 27,000 daily trips — more than 2,000 of those taking place during each of the peak-hour periods, according to the report.

Haghani said the city plans to release another cumulative study of traffic conditions in south Glendale when it completes the South Glendale Community Plan. However, he said, a draft of that development guide may take two years to complete.
Newer Post Older Post Home