Environmental groups oppose the plan to dip into hundreds of millions of dollars in fees from businesses whose carbon dioxide emissions exceed state limits. 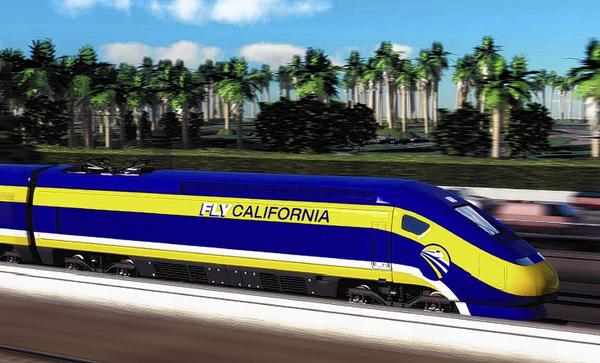 
The bullet train system suffered a series of legal blows last year that blocked $9 billion in state funding, sending Brown and his allies on a search for a new source of funds. This week, Brown plans to announce a new strategy to keep the project moving: dipping into hundreds of millions of dollars in fees collected from businesses whose carbon dioxide emissions exceed state limits.

But he may be trading one set of legal and political problems for another.

The thought of tapping those so-called cap-and-trade funds to support the $68-billion rail line is generating opposition from powerful environmental groups that have in the past allied themselves with the governor, including the Sierra Club, the Natural Resources Defense Council and the Planning and Conservation League.

The electrically powered bullet train has been marketed by the state rail agency as a means to reduce greenhouse gas emissions from California's vast transportation system. But those benefits may not be realized for many years and environmentalists would prefer the funds go to projects that can have larger immediate effects on what they consider an urgent climate crisis.

"The high-speed rail board is trying to make the best of a troubled situation, but I don't think raiding cap-and-trade is the right direction to go," said Bruce Reznik, executive director of the Planning and Conservation League.

The planned bullet train system's needs are so vast it could become a "money pit," Reznik said.
Brown's new funding plan would offer a short-term but important solution to the bullet train's financial problems but leaves many crucial, longer-term issues murky.

As part of Brown's budget proposal to the Legislature scheduled to be announced Friday, the state would use $250 million of cap-and-trade revenue for the project, according to Capitol officials with knowledge of the plan.

The state is relying on federal grants for its funding, though under current agreements it will have to begin matching that spending with state dollars sometime this year. The rail authority did not respond to a request to clarify when it will have to legally match the federal funds, though legislative sources say it could be as early as this spring. The state budget goes into effect July 1.

The state is in effect betting that court rulings would permit it to use voter-approved bond funds at a later time, and that billions of dollars in additional federal grants would become available in the future.

But there would be significant legal risks. The state law that set up the limits on greenhouse gases and the cap-and-trade system calls for investments that will reduce emissions by 2020 to the levels that existed in 1990, some experts say. The state's nonpartisan Legislative Analyst's Office, noting the bullet train would not be in operation until after 2020, has questioned the legality of using the cap-and-trade funding for rail construction.

Senate President Pro Tem Darrell Steinberg (D-Sacramento) was reserved in his response to the governor's proposal, calling for "a very robust legal analysis" of using cap-and-trade money for the bullet train.

"I've never believed you have to show definitively where every dollar is for the entire build-out," Steinberg said. "Having said that, I do think this proposal needs to be analyzed within the framework of: What is the overall strategy for the next leg?

"Within that context, cap-and-trade may or may not be the right funding source."

Environmental groups have supported the bullet train project, arguing it could reduce highway construction, allow more compact cities and help wean the public off dependence on fossil fuel. But they have objected to the route's effect on sensitive environments, as well as the governor's previous suggestion that the rail project be exempt from some requirements under state environmental law.
A spokeswoman for the California High-Speed Rail Authority said the proposed use of cap-and-trade funding is not new and has been included in a list of possible projects by the state Air Resources Board.

Dave Clegern, spokesman for the air board, dismissed legal concerns.

"We have a pretty good legal department, and they vet these things very carefully," he said.

The bullet train's funding problems multiplied six weeks ago when Sacramento County Superior Court Judge Michael Kenny ruled the state failed to comply with voter-approved restrictions in a 2008 bond measure. The measure required the state to produce a funding plan that identifies the sources of money to complete an initial operational segment of the rail line. Under current plans, that segment would run from Merced to the San Fernando Valley and cost $31 billion. But the state has only about $12 billion.

Separately, Kenny refused to validate the sale of the bonds, stalling the state's ability to draw on $9 billion in funding.

Dan Richard, chairman of the rail authority board, has characterized the judge's rulings as manageable setbacks.

"We believe that we have a number of different ways to satisfy the judge's concern," Richard wrote in an email last month to reporters. He hasn't indicated how his agency plans to do that.

In addition to seeking approval to use cap-and-trade money, the state could request additional changes to its federal funding agreement, pushing back the date when the state would have to begin matching federal funding.

So far, the rail agency has not run short of money.

"We continue to get paid and be assured that we will get paid in the future," said Ron Tutor, chairman of Tutor Perini Corp., the construction firm that won a $1-billion contract last year to build an initial 29-mile segment of rail. Tutor has said he expects to begin construction by July 1.

Cap-and-trade already is facing a legal challenge from the conservative Pacific Legal Foundation, which argues the program is an unconstitutional tax that was not properly authorized by the Legislature.

"It's a desperate attempt by the governor to grab money for his pet project," Burling said. "It continues to demonstrate why [the cap-and-trade law] is unconstitutional and why the railroad makes no sense."