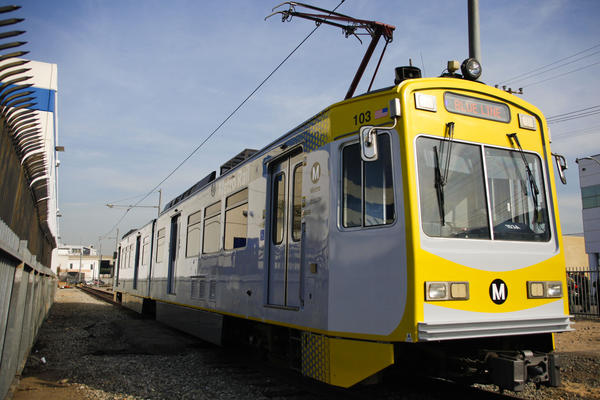 Refurbished Metro train cars like this one are part of Metro's planned multi-year, $1.2-billion overhaul for the Blue Line.

As part of a multi-year upgrade to the aging Metro Blue Line, the Los Angeles Metropolitan Transportation Authority will spend more than $850 million to purchase 78 train cars and renovate 52 more, officials said Wednesday.


The Blue Line, which connects Long Beach to downtown Los Angeles, has been plagued by maintenance-related delays for years as Metro put off costly repairs.

"The Blue Line is, today, indispensable," said Los Angeles Mayor Eric Garcetti, who serves as the vice chair on the Metro Board of Directors. He added that the "long overdue" repairs would make the system safer and more convenient.

A refurbished train car shown to the news media Wednesday looked noticeably different from its predecessors, which are white with a mustard-colored stripe. The new trains will be mostly gray with bright yellow fronts and backs. The highly reflective design is based on a popular look in the United Kingdom, and is designed to make the trains more visible.

The trains are being built in Los Angeles County by Kinkisharyo International, and will be shared between the Blue and Expo lines. The new designs will be introduced into the fleet as they are finished, Metro said.

Also included in the retrofit: more canopies to shade riders from the sun and LCD displays showing when the next train will arrive.

Metro has invested millions in gates intended to keep back cars and pedestrians at some of the Blue Line's busiest rail crossings. The agency will install swinging gates for the line's at-grade stations, many of which have few barriers between pedestrians and oncoming trains.

Since 1990, nearly 120 people have died on the Blue Line -- more than all other Los Angeles lines combined.

The dollar amount allotted for Blue Line repairs represents only part of a $1.7-billion maintenance backlog across the entire rail and bus network, according to Metro's 2014 budget.