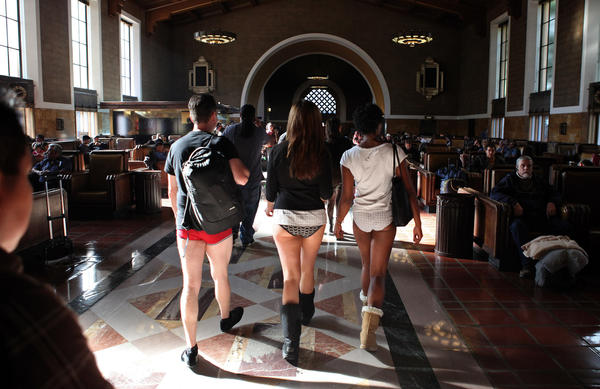 Three participants in the 2012 "No Pants Subway Ride" walk through Union Station in downtown Los Angeles.


Yes, people do ride mass transit in Los Angeles. And once a year, they do it without pants.
As part of an international improvisation event called the "No Pants Subway Ride," scores of Angelenos — fully dressed, but only from the waist up — will swarm the Red Line's Hollywood/Highland station at 2:30 p.m. Sunday.

Captains with nicknames like Agent Meow Meow and Agent Silky will gather groups together along the Red, Gold and Expo lines earlier on Sunday afternoon and help new riders pay fares, find their way through Union Station, and change trains. Meeting times for each group can be found in the event "dossier."

The theater group Improv Everywhere started the event 13 years ago in New York. It has since spread to more than 60 cities across the world.

Spokesman Marc Littman said the Los Angeles County Metropolitan Transportation Authority was aware of the bare-legged group ride, now in its sixth year in L.A. Pantless riders who are otherwise fully clothed won't be cited for indecent exposure, he said.

But, Littman said: "If you're walking around naked, that's a different story."

The local event organizers, an improvisational theater group called GuerilLA, encouraged participants to exhibit kindness toward "civilians" while underground in their underwear.

"This should also be fun for the passengers who are wearing pants since their most likely reaction to us will be curiosity and amusement," the organizers wrote. "Don't worry, we'll have plenty of pantless fun when we get off the train and onto the street."

In the "unlikely event you have to re-pants," organizers wrote, participants should pack an extra pair, just in case.