The Challenge of Selling Bike-Share in a Hilly City

Cycle regularly in Lisbon and you'll end up with buns of steel. Beyond a very compact central grid, streets in Portugal's capital are notoriously steep. Winding up hillsides and down into unexpected dips, the charming irregularity of these streets requires cyclists to navigate narrow lanes and bone-shaking cobbled surfaces.

It's not cyclists alone who suffer from this, of course. The trams navigating some Lisbon streets can feel like fairground rides, while pedestrians find the many (and sometimes stepped) slopes tough enough that the city has resorted to public elevators and several funiculars to help them. In a city with this sort of topography – Lisbon isn't likened to San Francisco for nothing – getting a bike-share scheme off the ground isn’t the easiest of tasks.

Lisbon from atop a hilll.(left); One of Lisbon's elevator shafts.

It’s a task that Lisbon is taking on nonetheless. This April, the city will launch its first bike-share scheme, starting off with a smallish network that adapts itself to local conditions. Staying away from the city's inland slopes for now, the stations (run by a private company) for the initial 300 bikes will all be situated along the Tagus riverfront, between the railway station and the landing stage beyond the monastery at Belem. Not only does this keep routes manageable (and following a trail that many tourists already cover), it profits from the cycle paths laid out along the spruced up waterfront.

Lisbon's future bike-share plans do stretch beyond this modest beginning. More bike lanes are already being laid out, and the scheme plans to lay out signposted routes through the city that allow riders to tackle the lowest gradients possible. The ultimate idea is to extend the current waterfront routes and stations far beyond the city, over 19 miles along the Tagus round a nose-like headland on the Atlantic to the surfing beach at Guincho. With an accompanying extension in the opposite direction towards Lisbon's bay, this would create a regional bike-share, as much use for getaways and long distance commuting as for reducing vehicular traffic in the city core.

Simply getting bikes visible on the street is an important start, of course. The number of regular cyclists in Lisbon is relatively low, so the scheme is also an advertisement for cycling itself. Lisbon’s hills may mean it never becomes a second Amsterdam, but these ambitious plans show that a city doesn’t need to be as flat as a pancake to make cycling feasible.

Peggy Drouet: You may be thinking that the bridge in the above photo looks much like the Golden Gate Bridge in San Francisco. Its name is the Ponte 25 de Abril and it was designed by the same company that built the Golden Gate Bridge and it was built to look like the one in San Francisco. One of my photos of the Ponte 25 de Abril (named after the date the dictator Salazar was overthrown--25 April 1974): 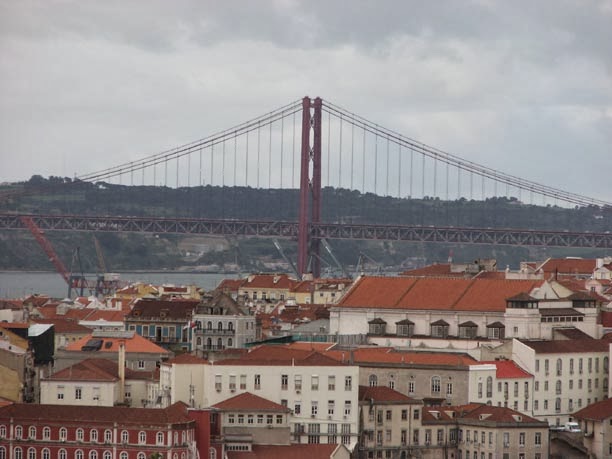