A tough L.A. wake-up call for a cycling newcomer

A Midwestern transplant enjoyed commuting to work by bike in L.A., until an encounter with a Chevy S-10 pickup. 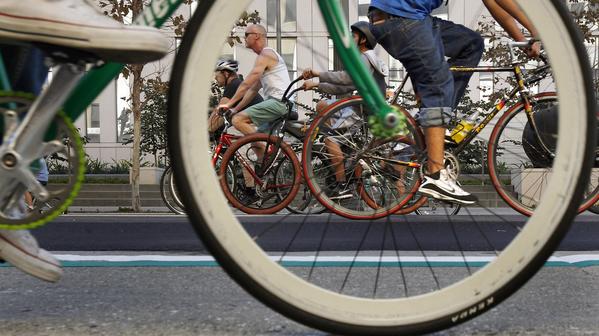 Bicyclists have an L.A. street to themselves during a CicLAvia event -- a far different scenario from what the city's bicycle commuters face.

A year ago, I wrote about arriving in L.A. from the Midwest and biking to work despite initial concerns about decrepit streets, aggressive drivers and a general unease that the City of Angels just wasn't all that bike friendly.
After a month in the city, I decided to give the bike a go and found it satisfying. I celebrated the quiet joys of commuting on a bike — the sights, the smells, the ability to explore the sprawling city on my own terms. The five-mile trip from Los Feliz to downtown was invigorating and a conversation starter at the office.

The dream lasted about four months.

In late April, I was biking home in the early evening, wearing a yellow reflective cycling vest. The rechargeable lights on my bike, however, were dead. A black Chevy S-10 pickup made a quick right turn in front of me near Sunset Junction, and my world slowed down and went fuzzy.

I glanced off the side of the truck and fell hard on my left side. When I opened my eyes, I was on my back near the curb with my limbs splayed out like a turtle. A small crowd gathered to check on my well-being. My left wrist had sustained a nasty cut, and I got some road rash on my shoulder and a nice scuff on my chin.

I exchanged information with the driver and figured I was OK. I wasn't.

I tried to go to work the next day, but felt nauseous and stayed home. I made it to the office on Day 2 but, still slightly dazed, left early and headed for the hospital. The doctor did some tests and said I had suffered a minor concussion.

Really, I was lucky. I could have slid under the truck, broken an arm or a leg. I could have been knocked unconscious — or worse.

After the accident, my parents called me from Ohio and pleaded with me to stop biking. But I refused to let the accident slow me down.

A few months later, my single-speed commuter bike was stolen out of my carport. I wondered if the universe was trying to tell me something.

As time went by, I biked to work less and less with my other bike. By the end of last year, I had stopped altogether.

I follow the biking group Wolfpack Hustle on Twitter and saw a quote that rings true for every cyclist, especially those brave Angelenos: "Every day I ride I know may be my last."

Don't get me wrong. I still climb the hills of Griffith Park several times a week and ride in other spots for recreation on the weekends. I'm just staying away from the workweek rush hour.

I can't count the number of people who have told me that they used to commute by bike until they were either (A) struck by a car or (B) got in some terrible accident by encountering a giant pothole or running into an open car door.

Now that I'm among the two-thirds of commuters in the city who drive solo to work, I experience Los Angeles differently from before. I can crank up "Morning Becomes Eclectic" on KCRW, roll the windows down and let the warm breeze dry my hair. I can sip a coffee and arrive at work clean — without having to change out of sweaty bike clothes.

And while I'm in favor of more bike lanes in the city, I must confess I'm annoyed when I see traffic lanes turned over to cyclists. North Virgil Avenue in East Hollywood recently lost half its vehicle lanes, and now my evening commute is five to 10 minutes slower.

In just over a year, I've become the opportunistic, lane-hopping L.A. driver I once joked about. Making it through on a yellow light is expected. Speeding 50 mph on surface streets has become the norm. I despise sitting in traffic, so I take shortcuts that I think are mine alone — I call them the "Bat Cave" routes.

That said, I hope the city's cyclists can gain a critical mass and take the roads back from the horde of cars. I may even reconsider my commuting decision.

I know this change of heart will upset cycling advocates and merely reaffirm what many motorists here already know to be true.

After the first column ran last year, I received emails from Midwesterners looking to move to the L.A. area and wondering if they could safely commute by bike. Here's how I responded to one — after the accident:

"I would have told you a month ago that [biking] was pretty safe, but the reality is that danger is always lurking — car doors, distracted drivers, drunk drivers, pedestrians, scooters … it's just really congested and the bike culture hasn't totally caught on yet. I wish I had better news, but I hope this provides some perspective."