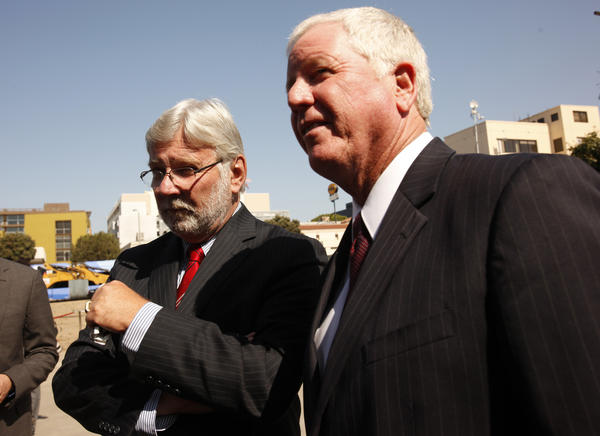 
At least three key executives are expected to leave or have already left the Los Angeles County Metropolitan Transportation Authority after their jobs were eliminated to make the agency less top-heavy, Metro confirmed on Friday.


An ongoing restructuring process will reduce by half the number of Metro employees who report directly to Chief Executive Officer Art Leahy, according to sources who spoke on condition of anonymity because they were not authorized to speak on personnel issues. Some agency departments have also been merged.

"They're whittling down the number of direct reports," said one official. The official added that although their current positions were eliminated, the outgoing executives could have moved to other agency positions.

The exits are unlikely to change how the agency operates, but they come during a period of rapid change for Metro, which is in the process of spending an estimated $35 billion in revenue from Measure R, the half-cent sales tax Los Angeles County voters approved in 2008.

By the end of this year, five rail lines in Los Angeles County will be under construction simultaneously. That includes the Downtown Regional Connector, which received a promise of $670 million in federal grants Thursday; and the first phase of the Wilshire Boulevard subway, which is expected to receive a $1.25-billion federal grant later this spring.

Doug Failing, Metro's executive director of highway programs, has left the agency, according to spokesman Marc Littman. Failing oversaw engineering and construction for Metro's highway projects, and served as the spokesman for "Carmageddon," the full closure of the 405 Freeway in 2011. Until he joined Metro in 2009, Failing supervised Caltrans District 7, which includes Los Angeles and Ventura counties.

A new position has been created that will oversee engineering and construction for highway and transit projects, including Failing's responsibilities, according to Metro documents. Bryan Pennington, who had supervised transit projects, will be promoted to fill that role, sources said.

Chief executive Leahy has asked K.N. Murthy, formerly Metro's executive director of transit project delivery, to remain at the agency, but he will not keep his current title, sources familiar with Murthy's situation said.

In a report presented to the Metro board in October, a consulting firm wrote that changes to the agency's structure and work flow could help create "true cultural change."

"As with any improvement effort, some changes will be rapid and highly visible," the report said. "... While there will be skeptics, we hope that people will give it serious consideration and time to see how the changes being implemented will work."
Newer Post Older Post Home