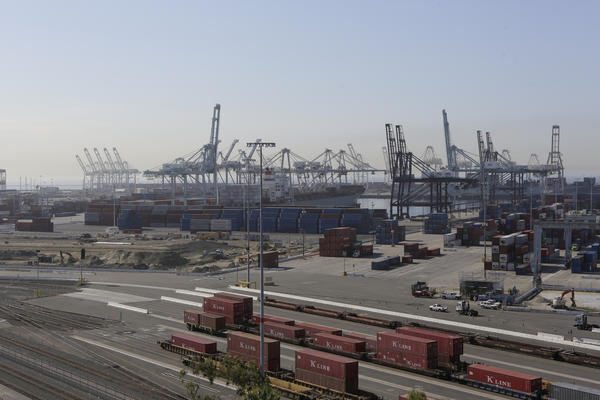 The port of Long Beach is the nation's second-busiest. A city audit released Thursday reveals that some commissioners who oversee the Port of Long Beach were improperly reimbursed for some international travel expenses.

A city audit released Thursday reveals that the Port of Long Beach spent thousands of dollars subsidizing the travel of spouses who accompanied harbor commissioners on trips to Tokyo, Paris and Montreal despite city restrictions that ban such reimbursements.


The audit, which targeted five of the most expensive trips in the last two years, found that commissioners were able to get around restrictions by booking “companion tickets” which billed the spouse’s flight as “free” but actually built in the cost, sometimes more than doubling the original fare.

As a result, the city spent $24,000 subsidizing spousal travel during three trips alone. Airfare for one commissioner and his wife during a trip to Amsterdam; Marseilles, France; and Paris was $15,000.

Varying itineraries also contributed to sky-high airfare costs. On one trip to Amsterdam, two commissioners paid about $15,000 each, more than double, to arrive one day earlier than the rest of the contingent.

Other questionable expenses identified by the city audit include airport transportation -- at more than $500 per trip -- and reimbursement for a single commissioner’s $200 dinner, more than triple the daily expense cap on meals.

Auditors also said that confirming that business actually occurred during certain legs was difficult due to poor record-keeping and a lack of centralization for travel planning. Harbor Commission travel costs topped $1.2 million for 12 trips over the last two fiscal years.

The report comes three months after the Long Beach City Council ousted former board President Thomas Fields, who had clashed with Mayor Bob Foster in recent years, most notably over the commission’s port-related travel expenses and a failed bid to relocate harbor headquarters to downtown Long Beach.

“Mr. Fields has been immune to suggestions or advice and is often dismissive,” Foster said in an address to the council in November. “I have no confidence that he can lead the port.”

The report targeted five of the most expensive international trips out of the 12 that commissioners attended over roughly two years.

Part of the problem, Doud says, is commissioners are allowed to book their own itineraries and hotel rooms, with little coordination.

“These are public funds. As leaders, we need to show that we are good stewards of public money,” Doud said.

The current harbor president, Doug Drummond, could not be reached for comment.

In addition to the inconsistencies in travel arrangements, commissioners received hundreds of dollars in reimbursements for expenses during extended personal stays abroad, and expenses paid to foreign trade representatives were not clearly itemized.

In one particular case, a trade representative was reimbursed for $887 in expenses labeled “transportation.” All eight receipts submitted were written in Korean, and gave no explanation of what was purchased.