Commuting by bike is an L.A. adventure

Los Angeles has more bike lanes and cyclists than ever. But there are growing pains in a plan that could transform the city. 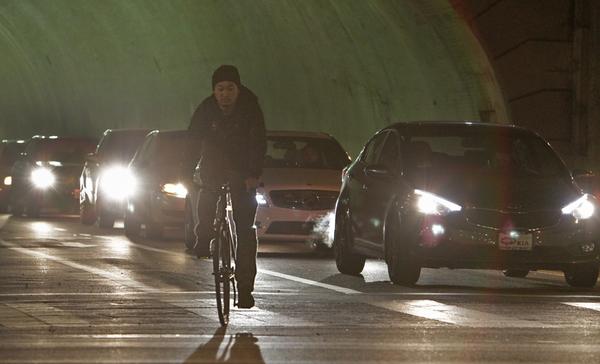 A bike rider using the bike lane comes out of the 2nd Street tunnel in downtown Los Angeles.

I pedaled to work Monday morning, which I had never done before because all things considered, I'd like to go on living a while longer.


Yes, I admit it. I'm afraid to bike city streets in Los Angeles.

That's partly because I had a nasty bike accident several years ago, resulting in a head injury that erased all memory of what caused the crash. And it's partly because riding a bike on streets jammed with vehicles, many of them piloted by distracted and incompetent drivers, seems like a terrible idea. I don't swim in shark tanks, either.
In 2009, 22 cycling deaths and 3,800 collisions involving bicycles were reported in Los Angeles County. That's according to the Los Angeles County Bicycle Coalition. On Tuesday morning, I attended a court hearing in the case of a driver charged with hitting a cyclist and leaving the scene in September in Boyle Heights. The injured cyclist died after being struck by another vehicle. So why was I on two wheels Monday morning?

Because we now have more bike lanes and cyclists than ever, and I wanted to see whether that makes pedaling a little more inviting. The city of Los Angeles added 100 miles of bike lanes in 2013, bringing the total citywide to about 350. This year, the plan is to add 40 miles, with hundreds more in years to come.

But while cyclists are thrilled, motorists are steamed, especially where the addition of bike lanes has meant the subtraction of car lanes.

I asked Michelle Mowery, the city's bike coordinator, if she'd ride with me before we talked these things over. She brought an office assistant and the three of us rode downtown from my house in Silver Lake — a 30-minute commute, or about 10 minutes longer than it takes me by car.

I'm happy to say we suffered no major injuries, but it was a little hairy on Glendale Boulevard, which has no bike lanes. When Glendale turned into 2nd Street, we had a bike lane all the way into the tunnel under Bunker Hill, where stanchions marked a welcome three-foot separation between cars and bikes.

Lots of traffic jams, particularly heading west through the tunnel in the evening rush, which is no longer a rush. I've gotten tangled up in it myself. I've given up on the tunnel and tried alternative routes out of downtown, but so has everybody else, and there's no easy way out.

I've heard countless complaints along the lines of, "What were they thinking?" or, "Did they bother to do a study first?" Motorists also note that while they are stuck sitting through red lights, for the sake of accommodating cyclists, they rarely see any cyclists.

The Department of Transportation insists that it studied a number of factors before laying down the bike lanes — there and elsewhere in the city. Though perhaps not to everyone's satisfaction.

But growing pains are an expected part of the rollout, said Mowery, who promises improvements and more bikes shooting through the tunnel as soon as more bike arteries are connected. She said the goal is a network in which, no matter where you are in the city, you are within a mile of a bike lane or bike-friendly road. In one of the more ambitious projects, her staff is designing protected bikeways as part of the proposed Figueroa Street transformation between downtown and USC, but that's got some businesses carping, so it's not a sure deal.

Mowery wants bikes to be a safe, viable option for as much as 5% of commuters eventually. As it is, only 1% commute by bike, 14% by transit, 3% by walking and the rest by driving.

As I see it, 5% isn't a big enough target, and the bicycle plan isn't grand enough in a city with mostly bikeable terrain, great year-round weather and a health-conscious population.

That's not Mowery's fault. She's dealing with infrastructure limitations and all the usual political realities. Too many motorists, merchants and homeowners stand in the way of a bold transformation in a city that desperately needs one, and no public official past or present has been brave enough to stand up to them for the greater good. But do they really think we can just go on adding cars to already clogged roads?

If the goal is to get more people to consider commuting by bike, we need more than painted white lines on the road and the rare buffer like the one in the tunnel. We need fully protected bikeways, so people of all ages can go for a ride without fear of getting hit by a bus.

We have dozens of major east-west and north-south thoroughfares in the San Fernando Valley and South Los Angeles, so why can't one or two become bikeways at fixed hours?

Why can't there be a no-parking day or two on one side of Olympic or Pico Boulevards, with the space turned over to cyclists?

In other cities, bike boulevards are becoming commonplace on residential thoroughfares. Stop signs, roundabouts, speed bumps and other impediments slow down and discourage automobile traffic and make it more convenient to travel by bike. But Los Angeles is missing out on the revolution.

"A lot of routes naturally lend themselves to" bike boulevards in Los Angeles, says Herbie Huff, a bike advocate and researcher at UCLA's Institute of Transportation Studies.
So will I be commuting regularly by bicycle now?

I think I'll hold off until it's a little safer. But in the meantime, when I'm riding on four wheels, I'll make sure to share the road with those much braver souls on two.