Cycling on the edge: Dodging cars and bike lane potholes 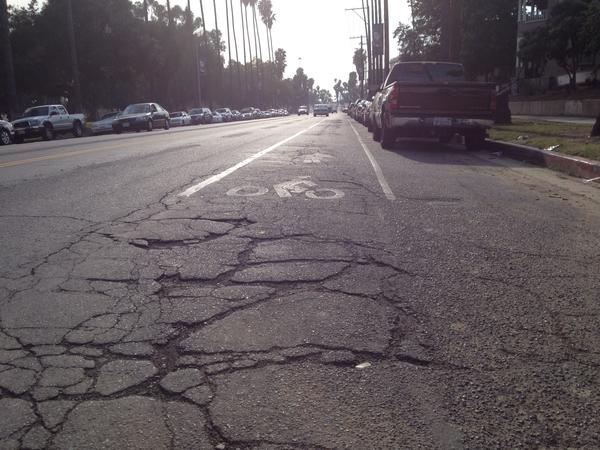 Part of the bike lane along the downtown-bound side of Mission Road in Lincoln Heights is seen last Saturday.


Any L.A. cyclist can go on about the dangers of riding on the far right of the road closest to the curb. In short, hazards tend to lurk there, out of sight and mind for motorists but perilously unavoidable for those on bikes.


In one of The Times' videos on sharing the road in L.A., Highland Park resident Melanie Freeland cogently summed up the dilemma for cyclists who want to steer clear of the unsafe, unreliable pavement by riding more in the center of a traffic lane:

"I think that the majority of L.A. traffic thinks that bicycles should be riding the curb. But the curb road is not safe for bicyclists; it's uneven, it's potholey. And so I try to take a lane when I bicycle, but cars don't really appreciate that because you're going slower, so obviously they start getting frustrated."

VIDEO: Do you bike in L.A.? Watch this to see what concerns all those drivers.

But what happens when that uneven, potholey pavement is part of a bike lane?

Case in point: The picture above, snapped on a calm Saturday afternoon, shows part of the bike lane on a particularly inhospitable stretch of downtown-bound Mission Road in Lincoln Park. During the weekday rush hour, a steady stream of speeding motorists zips through the adjacent vehicle lane, forcing any cyclist riding there to make a quick decision: whether to merge into car traffic and risk having a driver shout at you to move back into "your" lane (this has happened to me), or to squeeze the brake levers and rapidly -- and, from a motorist's point of view, unpredictably -- decelerate to avoid a spill.

Of course, most of Los Angeles' roughly 350 miles of bike lanes and paths are perfectly passable for cyclists, and the city's recent push to make the streets safer for non-vehicle commuters deserves support. But as far as improving safety for cyclists is concerned, striping a lane on the far right of a road does only so much. In fact, here, drivers' and cyclists' interests overlap: Smooth pavement is good for both cars and cyclists.

But sometimes, after a "road diet" -- a reworking of a street that often yields new bike lanes at the expense of a traditional traffic lane or two -- cyclists don't get smooth pavement. Handing over to cyclists road space used for years by multi-ton cars -- which cause far, far more wear and tear than bikes -- without doing the appropriate repair work leaves a major aspect of street safety unaddressed for bike riders. In effect, the city is corralling some cyclists onto inherently hazardous pavement. And with a new bike lane comes an expectation by drivers that they'll no longer have to share "their" space with cyclists, arguably leaving two-wheeled commuters worse off.

Last year, I raised this objection to two officials with the L.A. Department of Transportation, noting that the new bike lanes on the streets I use to commute to downtown L.A. do little good; in places they effectively force me to wobble along hazardous asphalt. Their unsatisfying response: The Bureau of Street Services is responsible for that kind of road maintenance, and the Department of Transportation tries to coordinate new bike-lane striping with street repair. In other words: The city's intentions are good, but the execution is less so.

For seasoned cyclists, this isn't too much of a problem; we can work around these imperfections. Long before the city striped new lanes on stretches of Huntington Drive and Mission Road through northeast L.A., I had become familiar with every pothole and every potentially dangerous span on my 16-mile roundtrip commute. For example, I can tell you that on Main Street, just after leaving downtown and passing over the L.A. River and two railroad crossings, there's a practically unnoticeable deep, man-made hole (definitely not a pothole) precisely where a cyclist would ride. Regular cyclists remember run-ins with hazards and near-misses and ride accordingly.

VIDEO: Do you drive in L.A.? Watch this to see what scares cyclists.

But the city's road diets and new bike lanes appeal to those reluctant, less experienced cyclists lured onto two wheels by the lanes' apparent safety and comfort. They might be unaware, for example, of the potentially perilous pavement that awaits them in the bike lane along Mission in Lincoln Park (please take note, Street Services). One minor accident or near miss -- or a tale of a near miss told to an anxious spouse -- can have a commuter reaching for her car keys the next morning.

The city justifiably touts its enlightenment on bikes and rightly acknowledges its past shortcomings. But those maps testifying to L.A.'s expanding bike network don't tell the whole story. It'd be a shame if any discrepancy between an expectation of improved safety created by the city and a cyclist's actual experience scares someone back into his car.

Oh, and drivers: Yes, even if there's a bike lane, cyclists may have to move into vehicle traffic. Sometimes, that’s the safest place for them to be.