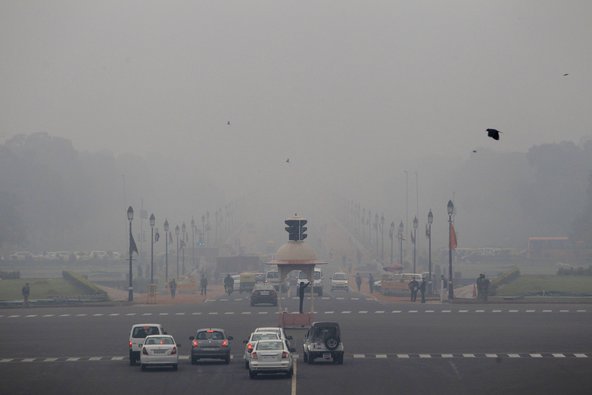 Smog and fog enveloping Rajpath, a ceremonial boulevard, in New Delhi on Wednesday.

NEW DELHI — For some worried expatriates and Indians, the battle to keep pollution out of their homes and their lungs started well before renewed media coverage in the past weeks unofficially crowned New Delhi as the world’s most polluted city.

One story by Gardiner Harris of The New York Times noted that for the first three weeks of this year, New Delhi’s average daily peak reading of fine particulate matter from one monitor was 473, more than twice as high as the average of 227 in Beijing.

The story also noted that many Indians seemed to be less concerned about the pollution compared to residents in Beijing. But instead of simply waiting for the winds to change, a pioneering few in Delhi have been willing to spend large sums or to risk embarrassment in their efforts to breathe clean air, employing air filters, indoor plants and imported masks.

Air pollution’s associated health risks have necessitated lifestyle changes the Chases, an American family of four who arrived in Delhi from Ethiopia about a year and a half ago.

“As a parent, you are constantly weighing outdoor exercise against health concerns because of the air,” said Genevieve Chase, a public health professional. “We used to be an outdoors kind of family. Now we have to save that for our vacations.”

The Chases have installed top-of-the-line air purifiers in two rooms in their home, each costing around $1,400 and only available from a supplier in Mumbai called Samskara Wellness, which, incidentally, said via email that their sales have risen slightly in the past week because of the increased news coverage of air pollution, although almost exclusively among expat customers.

Delhi’s exceptionally bad air means filters in the machines must be replaced at more than double the rate they would in, say, Geneva, where the machines are made, and upkeep costs could easily exceed $1,000 per year, said Ms. Chase. Nevertheless, she said that if her family chooses to stay in Delhi, they would buy more.

Outside, the Chases have tried to protect themselves by wearing masks to cover their mouths – a practice widespread in East Asia — but the masks are hard to find in stores and wearing them draws unwanted attention.

Annabelle Chase, 11, said her mother had gotten her to wear a mask specially brought from the United States, but once she reached school, her friends exclaimed, “Oh my gosh, what happened?” Then they said she looked “like an alien” or “like she had a disease.”

Ten minutes later, Annabelle swore never to don the mask again, or at least until the unlikely event that all her friends were wearing them, too.

Barun Aggarwal, the director of BreatheEasy, a company that installs centralized air systems in homes and businesses, said he, too, wears a mask when he goes outside, despite the stares.

As might be expected, Mr. Aggarwal recommended using an air filter at home, but he also said that placing plants that convert carbon dioxide to oxygen in rooms yields significant gains when coupled with air purifiers. He said small areca palms perform that conversion during the day and a plant called mother-in-law’s-tongue does so at night. Both are available at most nurseries.

But stopgap solutions seem to provide as many headaches as clean breaths. The masks are largely unavailable and decidedly uncool. Mr. Aggarwal wants to arrange masks for Delhi’s police officers, for their own safety and so they might become role models, and Ms. Chase wants to do the same with the athletes at her children’s school. Neither initiative has made much headway.

With air purifiers, the best require frequent filter replacements, are prohibitively expensive for most people, and besides, when those filters are thrown away, the particles trapped in them escape right back into the air, even if outside one’s home.

One of the most viable options for protecting Delhi residents’ lung health would be installing central ventilation and filtration systems – technology that already exists — in new homes and businesses, said Maija Virta, an independent indoor air quality consultant based in Bangalore.

“These systems improve air quality up to 80 percent. The very least we should do is not make new buildings without them,” she said. “Architects should be educated on how to incorporate these things.”

But there is little, if any, push to incorporate such technology in current projects, which is in line with the general lack of concern about the pollution.

Preetha Rajaram, an environmental epidemiologist and mother of two daughters, moved back to India from the United States three years ago and has since invested in air purifiers at home. But she was amazed at how few of her Indian colleagues seem bothered by the air.

“Sure, there are plenty of things competing to bother you here,” she said. “Perhaps if you’ve only been here though, then you don’t necessarily know that this isn’t the way that things should be.”

Ms. Rajaram says she and her husband are increasingly convinced that Delhi’s air is responsible for exacerbating one daughter’s asthma, and giving the other tonsillitis and inflamed adenoids, which has meant she can only breathe out of her mouth.

Mr. Aggarwal does his part to raise the alarm among Delhi residents over pollution’s hazards, often giving presentations at schools and conferences, but he lamented the apathy he encountered.

“People are definitely appalled, but instead of doing anything about it I often hear this kind of ‘Oh, God, should I just shoot myself instead?’ type of attitude,” he said. “Unless they or their kids are facing severe respiratory problems, I don’t see Indians doing anything about this.”

Not far from the terrace of the Delhi Golf Club, where Mr. Aggarwal sat for an interview, floodlights illuminated the shroud of carcinogenic particles hovering above the bunkers and greens.

Over at the next table, a man coughed and muttered one of Delhi’s common refrains into his cellphone: “This smog is killing me.”
Newer Post Older Post Home