Editorial: Make the Ventura Freeway safe for mountain lions too

The big cats essentially live on an island — hemmed in by freeways and the ocean — and their isolation imperils their long-term survival. A wildlife crossing is needed. 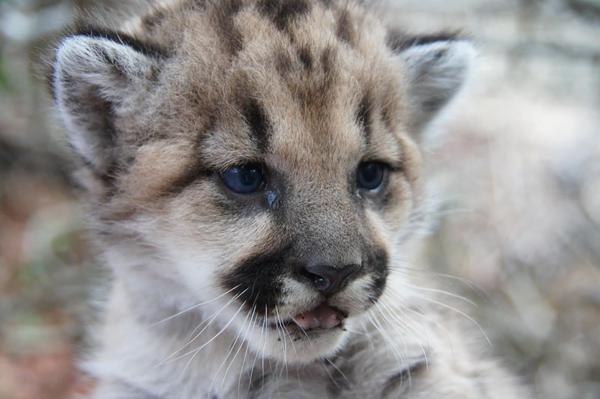 P-32 is one of three mountain lion kittens born in the Santa Monica Mountains in December that appear to be the result of inbreeding.

Los Angeles may be densely inhabited and full of traffic, but residents here are lucky to live near wild open spaces large enough to sustain mountain lions. About a dozen adult mountain lions live, mate and hunt deer and small prey on a patchwork of public and private land in the Santa Monica Mountains stretching from Point Mugu to the Sepulveda Pass. But these big cats essentially live on an island — hemmed in by freeways and the ocean — and their isolation imperils their long-term survival.

Over a decade, the National Park Service has put GPS collars on about 30 mountain lions in the Santa Monica Mountains, giving biologists new insight into how the area's last large carnivores survive on the urban edges. The research has shown that L.A.'s roads and sprawl not only make it nearly impossible for young male cats to move into new terrain to avoid clashes with larger males, but also that they lead to inbreeding.

Indeed, three kittens born in the Santa Monica Mountains in December were the result of inbreeding. Of the six litters tracked by the Park Service in recent years, half were produced by the father mating with his offspring. Inbreeding over time can lead to heart problems and defective sperm, and threaten the viability of the local population. Last fall, a mountain lion from the north that could have introduced new genetic material was struck by a car and killed while trying to cross the 101 Freeway in Agoura Hills. In the last decade, biologists have tracked just one mountain lion that was able to make it across the 101. The road is considered the biggest barrier to restoring the genetic diversity that the mountain lions need.

The solution is to build a wildlife crossing at the Ventura Freeway, which would benefit many kinds of animals but especially mountain lions. For years, the Park Service has pushed for a $10-million, 13-by-13-foot tunnel at Liberty Canyon Road in Agoura Hills. This is the rare stretch where there is parkland on both the north and south sides of the freeway, which is required for a wildlife crossing. But the agency's applications for federal funds have been rejected in favor of other projects. Now, the Santa Monica Mountains Conservancy will consider next week whether to provide $200,000 for Caltrans to study the options for a crossing in Agoura Hills, which could include a tunnel or a more expensive path over the freeway.

Whether over or under, it's clear that a crossing is needed to help the mountain lions survive and thrive. One of Los Angeles' greatest assets is its proximity to nature, and it's amazing that large predators can still roam the hillsides of the nation's second-largest city. State and local leaders need to invest the money to ensure that mountain lions remain in the Santa Monica Mountains.