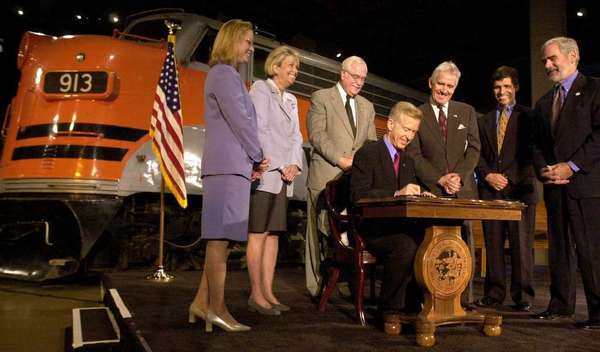 Gov. Gray Davis signed a $9-billion bond act for high-speed rail in 2002. The voters later passed the measure, but a judge froze the funds last year. The state hopes to get access by next year.


California bullet train officials have been granted an extra three months to come up with funding to start meeting their obligations under a grant for the project, federal officials said Friday.


The deal was struck under a new state funding contribution plan in which the state would begin spending its own money starting July 1 rather than April 1.

The additional time would presumably allow the Legislature to act on Gov. Jerry Brown's request for $250 million for the project, allocated from the state's fees on greenhouse gas emissions.

The $68-billion project would build a high-speed rail line from Southern California to the Bay Area.
In addition, the new plan shows that the state anticipates getting access to its $9-billion bond fund by 2015, not this year.

A Superior Court judge refused to validate the bond sale late last year, saying the state did not follow proper procedures in approving it. The state is asking that the decision be overturned. If it is, the state may have to go through another validation case, though officials have not disclosed their plans on that matter.

In a Feb. 20 letter to the Federal Railroad Administration, California High-Speed Rail Authority chief Jeff Morales said the funding plan reflects lower expenditure amounts, based on the slower pace of property acquisitions, utility relocations, a later start on construction and the outlook for the construction schedule.

The project is about one and a half years behind the schedule that rail officials described in 2012, when they expected construction to begin later that year. It now appears that construction will not start until this summer.

The delay and the slower rate of spending would seem to work against the legal requirement to spend most of the grant money by 2017. That deadline was established under the economic stimulus act, which accounts for most of the federal money.

But federal officials have granted the state a number of modifications to accommodate the project, including the most recent change outlined in the spending plan.

Under its federal grants, the project must match federal money with state money.

State officials say in the letter they have spent $95 million of state money against grant disbursements of $255 million. The Federal Railroad Administration allowed the state to count some prior spending as matching funds.