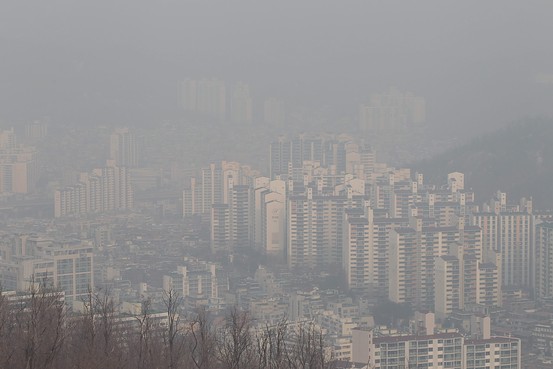 A view of Seoul covered in dust and pollution, South Korea, 17 January 2014.


Seoul’s concerns about air pollution are leading to a crackdown on two of South Korea’s trademark activities: barbeques and spas.

The city government said it plans to control restaurants that specialize in grilled meat and communal bathhouses for air pollution and will also subsidize filter installations at these businesses from next year.

The proposed measures are part of the city’s larger plan to curb the level of pollutants in the atmosphere, which has risen sharply, in large part because of pollutants blown in from heavily-industrialized northeastern China and fast desertifying Mongolia, according to experts.

South Korea’s air quality started improving from the mid-2000s, after the country replaced diesel buses and trucks with those powered with cleaner, compressed natural gas, according to South Korea’s National Institute of Environmental Research.

Seoul’s official air-quality data show the average concentration of PM10, a measure for hazardous particulate matter smaller than 10 microns in diameter, has come down to 41 microgram per cubic meter in 2012 from 76 a decade earlier.

The World Health Organization guideline says a reduction of PM10 pollution from 70 to 20 micrograms per cubic meter can cut air quality-related deaths by around 15%.

But last year in Seoul, the level of PM10 rose past 100 micrograms per cubic meter – double the WHO guideline value – on 16 days, compared with 5 days in 2012, according to the city. PM10’s small size enables them to enter lungs and cause pulmonary and other diseases.

Who’s to blame? A Seoul-commissioned study in late 2011 said the wind from South Korea’s northwest is responsible for nearly half of the microscopic particular matters in Seoul’s air. The other half originated locally or from neighboring municipalities.

The Seoul municipal government says it plans to strike a deal with Beijing by next month to cooperate on air pollution reduction. A city spokeswoman declined to provide the details but said there was a consensus between the two cities. There are also plans for tree planting in western China and Mongolia, where desert winds carry sandstorms into South Korea in the spring.

A person answering the phone at the Beijing Municipal Environmental Protection Bureau said that Beijing and Seoul were cooperating on pollution but said officials would address questions from Friday, the end of the Lunar New Year holiday.

Officials at the municipal government didn’t respond to faxed questions on Monday.

The city-commissioned study says some 10,000 Korean barbeque joints in the city are responsible for 1/20 of the total PM2.5 emission and that its 1,135 bathhouses are responsible for 1/40. The businesses will be treated as air-polluting facilities from next year, meaning they can be fined for going over the emission standards.

This year, Seoul will conduct additional studies about how to filter particular matter from popular table-top grill restaurants and on the level of emission in spas that are usually open 24 hours.

More diesel-fueled vehicles will be replaced with those using less-polluting energy, the city said.
The data for South Korea includes smaller and more toxic PM2.5, which unlike WHO and several countries including China, doesn’t release a separate data. Last month in Beijing, the level of PM2.5 reached 886 micrograms per cubic meter, almost 12 times the recommended standard in China and more than 25 times the standard in the U.S.

A spokesman for the association of bathhouse operators declined to comment on the city’s proposal, saying he wasn’t fully briefed on its content.