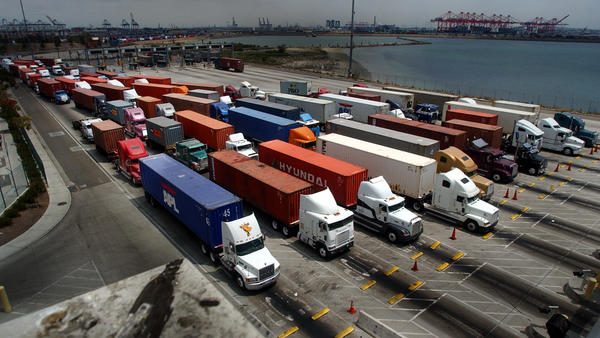 Truckers line up at the entrance of a cargo terminal in the Port of Long Beach. Drivers are increasingly contesting their classification as independent contractors instead of company employees.

Representatives of a labor-friendly campaign to improve the wages and working conditions of port truckers asserted Wednesday that the vast majority of drivers are victims of widespread workplace violations by trucking companies.


Instead of being treated as employees, thousands of drivers in the ports of Los Angeles, Long Beach and other harbors across the nation have been illegally classified as independent contractors, advocates said during a media conference call.

That designation has lowered wages, prevented drivers from unionizing and denied them the protections of state and federal labor laws, they added.

“Trucking used to be one of the backbones of the blue-collar middle class, but deunionization, deregulation and misclassification of drivers have turned port trucks into sweatshops on wheels,” said Jared Bernstein, a former chief economic advisor to Vice President Joe Biden now with the Center on Budget and Policy Priorities.

The California Trucking Assn., which represents about 2,000 trucking companies in the state, did not immediately return a call for comment.

Bernstein is coauthor of a new study that addresses the impacts of classifying port truckers as independent contractors and the growing resistance by drivers to that designation.

Also participating in the research are the union-backed Change to Win Strategic Organizing Center and the Los Angeles Alliance for a New Economy. The report is part of a national effort on behalf of truckers by the Coalition for Clean and Safe Ports, which includes Justice for Port Drivers and the Teamsters union.

About 75,000 truckers serve the nation's ports, including an estimated 15,000 in Los Angeles and Long Beach, the largest combined harbor in the United States.

Their job is to haul the cargo containers of shippers to and from port terminals. As a critical part of the goods movement industry, they handle more than a trillion dollars of cargo annually.

Citing various court rulings and enforcement actions by state and federal labor agencies, the report states that port drivers classified as independent contractors are actually employees because of the extensive control trucking firms have over them, directing when they work, where they work, what their fees will be and who they can work for.

Many companies, they added, own the trucks, but drivers have to pay for gas, repairs and maintenance out of their own earnings, dramatically reducing their take home pay.

According to the report, the median earnings of an independent contractor is about $29,000 a year, compared with $35,000 for a trucking company employee.

"I can't drive for other companies and I have no say in setting the rates for the loads I haul," said Dennis Martinez, 28, an independent contractor at the Port of Los Angeles who has a wife and four children. "I work really hard and have almost nothing to show for it."

Martinez said he works a six-day week, eight to 14 hours a days and takes home about $200. He has lodged a wage theft complaint against his company with the state Department of Labor Standards Enforcement.

His action is among some 400 complaints that have been filed by port truckers with the state agency, which has issued 19 rulings confirming that drivers have been misclassified as independent contractors. In addition to formal complaints, a number of lawsuits are pending against California trucking companies.