Metrolink will be the first commuter service in the nation to use positive train control, which would have prevented the deadly Chatsworth crash. 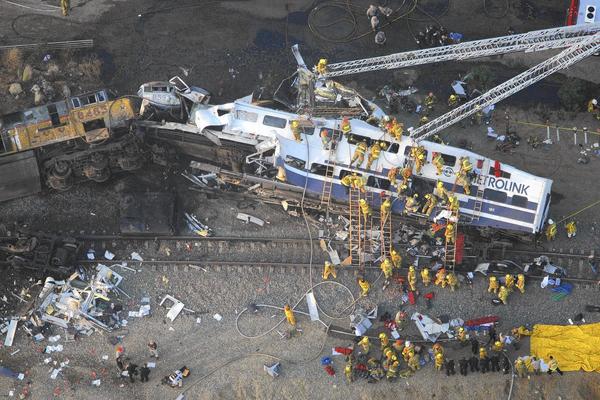 Fire crews crawl on a derailed Metrolink car as they try to rescue victims after the Metrolink train collided head-on with a freight train in Chatsworth in 2008. Metrolink is adopting a safety system that would have prevented the Chatsworth crash.

The Metrolink passenger railroad Thursday will become the first commuter service in the nation to roll out a sophisticated collision avoidance system designed to overcome human error.


Had so-called positive train control been in place five years ago, experts say, it would have prevented Metrolink's deadly Chatsworth crash. In that accident, an engineer missed a red stop signal while text-messaging on his cellphone and struck a Union Pacific freight train head-on. Twenty-five people died and 135 were injured.

The tragedy, however, prompted Congress to demand that the nation's freight and passenger railroads be equipped with positive train control by the end of 2015. Metrolink leaders vowed to act a year ahead of that schedule.

"This is tremendous; it's a first," said Michael DePallo, the railroad's chief executive officer. "We have been working on this for the past several years. It's a great testament to the organization and our commitment to safety."

The technology, which relies on global positioning satellites, digital radio communications and computers to track trains, is part of an ongoing effort by Metrolink to overcome its poor reputation for safety in the wake of the worst train accident in recent state history.

With its computer-assisted dispatching and monitoring capabilities, the system can detect when trains violate speed restrictions, miss signals or enter the wrong track. In an emergency, it can override the engineer and apply the brakes.

Metrolink officials say selected passenger trains will be under positive train control on tracks shared with freight trains of the Burlington Northern Santa Fe Railway Co., which owns the right of way.
The routes include portions of the 91 Line from Los Angeles to Riverside, the Orange County Line between Fullerton to just east of Union Station in downtown Los Angeles and the Inland Empire-Orange County Line that runs from San Bernardino to Anaheim Canyon.

BNSF, which has worked with Metrolink to install positive train control, also has equipped some of its trains with the technology. The nation's second-largest railroad has placed the system on about 9,000 miles of its track in 21 states.

The 512-mile Metrolink network handles about 42,000 riders a day and serves six Southern California counties — Los Angeles, Orange, Riverside, San Bernardino, San Diego and Ventura.
Railroad officials plan to gradually install the system on the rest of its network by the end of this year. If so, completion of the $210-million project will be well ahead of the December 2015 deadline set by the federal Rail Safety Improvement Act passed as a result of the Chatsworth crash.

"Better late than never," said Barbara Kloster of Thousand Oaks, whose son was almost cut in half in the collision. "It won't take care of what happened, but it will take care of any event in the future."

The National Transportation Safety Board has recommended the use of positive train control since 1990. But powerful rail industry lobbying groups — citing the heavy cost to companies — have pushed back over the years. Even now, some lines are trying to get the deadline relaxed, arguing that the system is tricky to install and remains largely unproven in daily operations.

After months of testing, DePallo said that Metrolink decided Monday to make a single trial run with passengers between Union Station and Riverside while the train was protected by positive train control.

"It was flawless. Everyone was real comfortable with the way things were working," DePallo said. "This is a big deal."