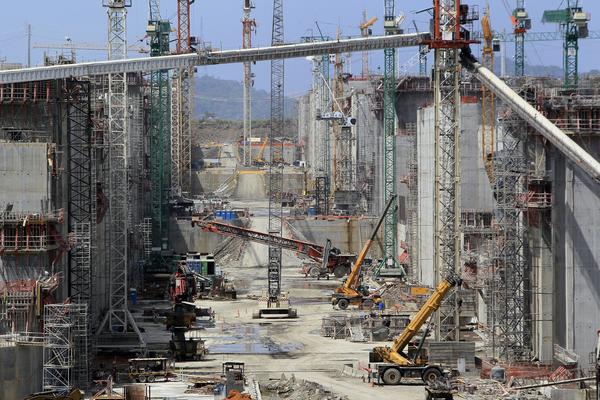 A view of the expansion project on the Panama Canal in the Pacific area, taken Feb. 5.


MEXICO CITY -- A long-planned $5.25-billion expansion of the Panama Canal, one of the world’s most important shipping lanes, is under threat by cost overruns and acrimonious disputes among builders and managers.


Negotiations to resolve some of the issues -- namely who should pay more than $1.6 billion in unexpected costs -- broke down Wednesday, according to the Panama Canal Authority, which administers the 50-mile route that links the Pacific and Atlantic oceans.

Jorge Quijano, Canal Authority administrator, accused the Spanish-led consortium in charge of widening the canal of ordering all work to stop.

The principal firm in the consortium, Spain’s Sacyr SA, denied that  it had halted construction. But most experts agreed that work had already slowed considerably, potentially delaying the finish date yet again.

The project, which includes a new traffic lane and a third set of locks and will double the waterway’s capacity, originally was to have been completed this year. That deadline has already been pushed to 2015.

Canal officials complained that the construction consortium failed to follow legal procedures to determine who should pay the cost overruns, generated in part by harder-than-expected dredging and other geological challenges. One of the legal venues is an international arbitrage panel that could be convened in the United States.

“I want to make clear that we will not submit to blackmail,” Quijano said in a Panama City news conference.

“It is irresponsible,” he said. “We will close ranks.”

But Sacyr, the Spanish firm, on Thursday denied that it had stopped construction, although it added that such a decision remained a possibility.

Some experts say the fundamental problem is that the consortium, which also includes Impregilo of Italy, submitted an unrealistically low bid that the Panamanian government all too eagerly snapped up when the project was awarded in 2009.

The Martinelli government previously has been accused of pushing Panama’s growth rate, the highest in the region, through similar shortcuts that will eventually prove unsustainable.

Still, the disputes over the expansion are not expected to scuttle the project but rather to delay it further.

“The project will be completed, but perhaps not with this consortium,” Felipe Chapman, an economist with Indesa, a Panama City-based financial analysis firm, said in a telephone interview. “It would be better to finish with this consortium, because it would take less time. Otherwise, there will be more delays.”

Officials at the two largest ports in the United States -- Los Angeles and Long Beach -- have been eyeing the Panama expansion project warily for some time, in part out of concern that it could eventually make it easier for eastern U.S. ports to take away Asian-based trade.

For now, California ports are holding their own because they are already equipped to handle the larger cargo ships that the expanded Panama Canal will transport, L.A. officials say.

The Panama Canal handles up to 6% of world commerce. Expansion is crucial for attracting and accommodating the supertankers and ever larger cargo ships plying the world’s trade routes.

There were indications that public opinion in Panama was siding with the Canal Authority, in a small country where the waterway accounts for thousands of jobs and is a source of national pride.

“The time has come for us to be respected,” the daily newspaper La Prensa said in an editorial after it was reported that the negotiations with the consortium had broken down. It urged the canal authority to rescind its contract with the construction firms.